During the pandemic months, airlines garnered record numbers of complaints in the official Department of Transportation (DOT) airline complaint system. This is the first step in the DOT legal policy. The lack of airline refunds after airlines canceled flights caused thousands of filings. Yes, many airlines, even big ones like United Airlines, initially refused to return airfares and ancillary fees collected from passengers for flights that never took off.

A petition to the DOT in order to get some redress is the only path. Passengers need to send a description via the DOT complaint system. And, they have in record numbers. DOT reminded the airlines of the law that refunds were required after the outpouring of passenger complaints. DOT added a notice to airlines that they reach out to customers whom they convinced to take credits and offer them cash instead.

Passengers can file a lawsuit with the Federal court system if they cannot get satisfaction from DOT. No DOT legal policy provides a roadmap for action.

If you experience bad service or if airlines do not follow their contracts of carriage, send a complaint.
Use this form: https://airconsumer.dot.gov/escomplaint/ConsumerForm.cfm

Years ago, the Supreme Court interpreted the Airline Deregulation Act of 1978 to remove all consumer protections from passengers. Two court cases regarding advertising have been interpreted by the Supreme Court, airlines and the DOT as forbidding actions against airlines in state and local courts.

Other court rulings have created a mix of what is covered under the federal preemption rules and what is not. Consumers have no clear pathway to redress if they feel wronged by the airlines.

Passengers can take airlines to the small claims court 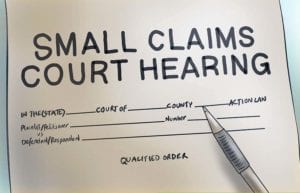 Basic contractual disagreements can be brought to small claims courts. However, the amounts of compensation are limited. No fully vetted system exists for consumer complaints between small claims court and federal courts. State and local judicial access have been prevented.

Passengers need a set of judicial rules and precedents for effective litigation in front of DOT. The Department also needs rules about the speed of resolution and how complaints will be handled.

The concept of Federal Preemption means using the DOT complaint system first, then filing a lawsuit in the Federal court systems

The language of the ADA noted that the law controlled all rules “relating to rates, routes, or services of any air carrier.” Through the years the courts have struggled with this definition, especially in terms of service.

The ADA includes an express preemption clause, which provides “a State . . . may not enact or enforce a law, regulation, or other provision having the force and effect of law related to a price, route, or service of an air carrier that may provide air transportation under this subpart.”*

This has been hotly debated in legal circles and has been the cornerstone of the current airline regulation and tort processes.

The express preemption clause, applicable to “price, route or service,” has been characterized as a “careful and balanced application of the statutory standard of preemption.* While we will concede that the clause may be careful and balanced, it is not free of ambiguity. What constitutes a “price” or a “route” seems relatively straightforward; however, “service” is another matter entirely.**

**Daniel H. Rosenthal, Legal Turbulence: The Court’s Misconstrual of the Airline Deregulation Act’s Preemptions Clause and the Effect on Passengers’ Rights, 51 Duke L.J.1857, 1870 (2002) (arguing that “[i]n the Deregulation Act, Congress neither defined ‘services’ nor specified the type of state action preempted by the clause. Consequently, the courts have had to interpret what Congress meant, but they have had difficulty with the Deregulation Act’s frustratingly broad language.” (citations omitted)); see also Matthew J. Kelly, Comment, Federal Preemption by the Airline Deregulation Act of 1978: How Do State Tort Claims Fare?, 49 CATH. U. L. Rev. 873, 874-75 (2000).

Airline passengers have been cheated out of the state and local justice system.

Airline regulation via the FAA has been clearly defined for years. However, laws pertaining to passenger service (and the definition of service) are much more uncertain.

Passengers need a revamped system to file complaints against airlines and a clear definition of aviation laws as they apply to passenger service. There should be a clear passenger compensation process for losses caused by the non-delivery of services.

Airline service is an underdeveloped body of law in the DOT legal policy.

Contracts of carriage, totally regulated by DOT, are a mishmash of vague legal language. The only rules that are clearly identified in the airline contracts of carriage are those promulgated by DOT. The full-fare advertising rule and rules governing involuntarily denied boarding (or bumping) are DOT rules.

The airline is responsible for getting passengers from Point A to Point B once an airline ticket is purchased. That’s it. See the Delta Air Lines rule below.

Is DOT responsible for reviewing airline contracts of carriage?

The wording from the Delta Air Lines Contract of Carriage, dated June 18, 2019, shows how vague these contracts can be. Note the qualified language — reasonable efforts, reasonable dispatch, may substitute…, not responsible for making connections …, etc. Airlines only promise to get passengers to their destination, eventually. The wording is very important.

Delta will exercise reasonable efforts to transport you and your baggage from your origin to your destination with reasonable dispatch, but published schedules, flight times, aircraft types, seat assignments, and similar details reflected in the ticket or Delta’s published schedules are not guaranteed and form no part of this contract. Delta may substitute alternate Carriers or aircraft, change its schedules, delay or cancel flights, change seat assignments, and alter or omit stopping places shown on the ticket as required by its operations in Delta’s sole discretion. Delta’s sole liability in the event of such changes is set forth in Rule 22. Delta is not responsible or liable for making connections, failing to operate any flight according to schedule, changing the schedule of any flight, changing seat assignments or aircraft types, or revising the routings by which Delta carries the passenger from the ticketed origin to destination.

Airline passengers need more tightly written contracts with airlines. DOT should police airline contracts in the absence of any other legal entity. The airlines cannot have federal preemption and then no federal protections for passengers. Or, passengers need to move oversight of passenger service back to the state and local courts.

READ ALSO:
Learn how secure WiFi can make a whopping cybersecurity difference
Why we need a common flight credit rule for airlines from DOT, now

Learn how secure WiFi can make a whopping cybersecurity difference