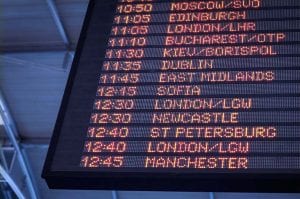 Recently, airline reservation system failures produced 2,000 delays and 238 cancellations. A technical issue with Sabre Corporation impacted major airlines in America and all travelers. The airlines most affected by this IT failure were American Airlines, Alaska Airlines, JetBlue and WestJet.

NOTE: News media treated the fact that passengers suffered delays and cancellations as a secondary harm. Airlines suffered the real damage in virtually every news report. IT APPEARS THAT THE CULPRIT THIS TIME WAS SABRE CORPORATION. This company provides IT services that operate reservations and flight operations for many major airlines. SABRE is considered to be under the control of the Department of Transportation (DOT).

There should be fines for airline reservation system failures, including Sabre’s technical failures.

Sabre needs to pay compensation to the airlines for airline reservation system failures. They lost millions. Plus, compensation to passengers for missed family events, missed connections, and business events should be paid and required. Families have missed weddings, organized tours, and cruises. Business travelers have missed meetings. And, many others faced financial repercussions because of information technology failure.

Simply apologizing for screwing up hundreds of thousands of travel plans is not adequate. DOT must get involved in this issue  of airline reservation system failures and make sure that GDSs like Sabre are included in any new rules.

All airlines are having problems with their Information Technology (IT) systems.

In the last year, American, Delta, Southwest, and United faced airline IT failures. Even Congress chimed in on this issue, mandating in the last FAA bill that DOT write rules to require airline responsibility for their IT failures.

Sabre’s massive systems control a virtual duopoly in airline reservation and operation systems software. The majority of US travel agents use Sabre systems still use mainframe computer systems and old green screens to distribute data to travel agents and airlines. What consumers see on their personal computers has been modified and enhanced by the airlines or online travel agencies.

Travelers realize that IT issues will be a problem. However, Travelers United holds that these IT problems are the fault of the airlines and their contractors. Passengers should be properly compensated for IT failures.

IT Failures are not Acts of God

So far, when it comes to customer service, the legacy carriers and their IT contractors treat these IT issues as Acts of God or force majure problems. They are not. These failures are fully within the control of the airlines and their contractors, like Sabre. Compensate passengers don’t punish them, for the airlines’ failures.

This kind of service failure is similar to involuntarily denied boarding but without any compensation. Passengers need adequate compensation.

After repeated airline IT failures, Travelers United called on the airlines to make their passengers whole and to tell passengers about their rights under international treaties and European Union rules for international flights.

Passengers affected by these airline information technology failures that have affected international flights and connections should contact www.airhelp.com to check on international compensation that they may be due from the airlines (especially international carriers) for their failures. This compensation can range from about $660 to more than $7,000. It is worth checking.

Travelers United works with Congress to institute compensation for delays and cancellations caused by airline/contractor IT failures. These are added to the paltry number of instances where airline passengers can claim compensation from airlines.

Join us as we work to hold airlines and their information technology accountable for their IT failures rather than saddling passengers with their losses from unattended family events, ruined vacations, lost reservations, missed business meetings, and unexpected overnights while awaiting the airline IT systems to be brought back online.

READ IN TRAVELERS UNITED: Airlines fail and passengers get no flight delay compensation

Photo of schedule board by JESHOOTS.COM on Unsplash

What the DOT Consumer Advocate should do for you (Part 2)