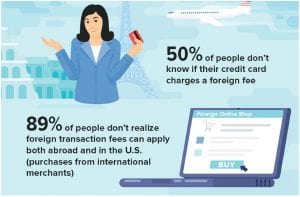 US consumers waste millions of dollars each year paying foreign transaction fees on credit cards. In many cases they don’t even know they’re paying these fees. Half of all credit card users don’t know whether their card has a foreign fee. But that is only part of the problem.

Unsuspecting online shoppers who make a purchase from a merchant based abroad could get hit with an international surcharge of up to 3 percent as a result. They are charged extra fees without leaving the country. Amazingly, these credit cardholders, overall, are already on the hook for more than $1 trillion in unpaid credit card balances overall.

“Consumers often do not know this until they spot the foreign transaction fee listed separately on a bill,” Sarah Jane Hughes, a university scholar and commercial law fellow at Indiana University, told WalletHub. “I would be surprised if these fees are not correctly disclosed in credit card agreements because that is required. Some consumers may not have read the entire set of disclosures or have read only the parts they thought they had an interest in at a particular time.”

READ ALSO: With a COVID vaccine certificate, do you have freedom to vacation?

Foreign transaction fees are considered by consumers to be unfair

Foreign transaction fees on credit cards only seem to make consumers mad. More than 80 percent of people consider foreign fees to be unfair. And, 6 in 10 go as far as to say they’ll never get another credit card that charges a foreign fee.

Most of the best credit cards on the market are among them, too, which means there’s no need to sacrifice in terms of rewards, annual fees, APRs, or other features.

Although finding a good credit card with no foreign fees is increasingly simple, consumers’ lack of knowledge is problematic. At WalletHub, a financial website, you can learn all about the best credit cards without foreign transaction fees.

Educating the public is the real solution

“It is a challenge of public education to make people aware of the possibility of such fees and to prompt them to become informed regarding their own credit cards,” said Sherrill L. Shaffer of the University of Wyoming. “It’s a bit of a chicken-and-egg problem. Anyone who is broadly aware of such fees will likely take a moment to check out the particulars for their own card. But anyone who hasn’t looked at it for their own card probably is unaware of the issue more generally.”

With a COVID vaccine certificate, do you have freedom to vacation?