DOT enforces the law. Airlines are canceling and changing flights at a record pace.

There is a law that the DOT may have forgotten. Passengers who have faced widespread disruptions of schedules are due compensation. 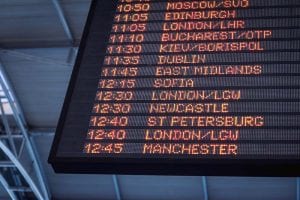 Ever since Scott McCartney revealed in the Wall Street Journal the amazing stories about airline cancellations, my phone has been far busier than normal. Widespread disruptions are running full force because of too few workers and IT failures. Passengers should get compensation for widespread disruptions.

Since Sunday, Spirit Airlines has been on a four-day spree of cancellations and delays that have involved more than half of its airline fleet. American Airlines has avoided the headlines but canceled hundreds of flights a day. Southwest, Delta, and every airline have been affected by IT failures and not enough workers.

Reporters are only repeating the Spirit Airlines statements that they have faced weather and “operational problems.” And American Airlines and other airlines have noted “operational difficulties.” No airlines made any statements about compensation that I know of. They certainly should.

Passengers do have rights in this situation of widespread disruptions. They just don’t know what they are. Nor, perhaps, do the DOT and the airlines.

Though the 2018 FAA Bill passed for the entire 5-year funding period, this widespread disruption portion was ignored by the Department of Transportation (DOT) under guidance from President Trump. Plus, you can bet that airlines would not be bringing this to the attention of the public.

The airlines are protected when their schedules fall apart because of weather, mechanical breakdowns, or no personnel. The description of “Widespread Disruptions” in the FAA bill is specifically designed to deal with IT failures that cause the “interruption of all or the overwhelming majority of the air carrier’s systemwide flight operations, including flight delays and cancellations.”

Here is the exact wording of the bill.

The term ‘widespread disruptions’ means, with respect to a covered air carrier, the interruption of all or the overwhelming majority of the air carrier’s systemwide flight operations, including flight delays and cancellations, as the result of the failure of 1 or more computer systems or computer networks of the air carrier.

Congress in its wisdom saw the possibility of exactly this kind of IT failure and widespread disruption.

Plus, with a bill loaded with lots of studies and potential rulemakings, Congress decided to make this section a clear change in the Federal Code of Regulations. It directed the exact wording and added them directly to the consumer protection laws.

Though the law is very specifically written, it is designed for exactly the series of cancellations and delays that American passengers face. For me, it all came together when I read the following in an article by Michael Laris in the Washington Post yesterday.

Spirit has been facing its own far-reaching problems.

The airline canceled more than 800 flights over two days this week, including 61 percent of its Tuesday flights, according to aviation firm FlightAware. The airline said many of those cancellations were part of a “thorough reboot of the network, allowing us to reassign our crews more efficiently and restore the network faster.”

[Flight attendants] at Spirit said the airline had an IT outage Tuesday that prevented employees from using the crew scheduling system for more than an hour..

FlightAware data indicates American canceled 377 flights, or 12 percent of its total, on Tuesday. It canceled more than 100 flights Wednesday.

Southwest also faced weather-related delays Tuesday, with 1,215 of its flights — about one-third of them — coming in late.

This meets the specifics of the law — a majority of flights canceled and the failure of at least one computer system.

Travelers United is the only advocacy group that fought consumer relief for IT failures.

From the inception of the debate about the 2018 FAA Bill, Travelers United was vocal about the need for compensation for passengers caught in the middle of an IT failure.

These days, when no one wants to be blamed for questionable laws, a statement like this is hard to find. Here is the government’s own website with the regulation in black and white. Go to page132 STAT. 3341 of PUBLIC LAW 115–254—OCT. 5, 2018.

SEC. 428. WIDESPREAD DISRUPTIONS.
(a) IN GENERAL.—Chapter 423 of title 49, United States Code, is amended by adding at the end the following:

(b) DEFINITIONS.—In this section, the following definitions apply:
(1) WIDESPREAD DISRUPTION.—The term ‘widespread disruption’ means, with respect to a covered air carrier, the interruption of all or the overwhelming majority of the air carriers systemwide flight operations, including flight delays and cancellations, as the result of the failure of 1 or more computer systems or computer networks of the air carrier.
(2) COVERED AIR CARRIER.—The term ‘covered air carrier’ means an air carrier that provides scheduled passenger air transportation by operating an aircraft that as originally designed has a passenger capacity of 30 or more seats.
(c) SAVINGS PROVISION.—Nothing in this section may be construed to modify, abridge, or repeal any obligation of an air carrier under section 42301.’’.

We wrote stories and distributed them to staffers of the House T&I Committee and the Senate Commerce Committee. These were the worker-bees who would put our ideas into law. Having a good relationship with them was key to getting consumer protections tucked into the massive FAA funding bill.

Now that the bill passed, DOT must enforce it. Spirit Airlines got caught by consumer advocates. But, the proof of the law’s benefits has already been partially lost. The airlines involved did not publish a “clear statement indicating whether, with respect to a passenger of the air carrier whose travel is interrupted as a result of the widespread disruption, the air carrier will [provide overnight accommodations, ground transport, meal vouchers, arrange other transportation, or provide sleeping accommodations in the airport.”

The enforcement of this law will be telling. DOT must step up and require some kind of compensation for every person on the canceled and delayed Spirit flights. If the DOT under the previous administration did its job, we would not discover the Department’s failure now.

READ ALSO:
Why Catch 22 has nothing on Lufthansa or its Star Alliance IT glitches
How passport rules here and abroad can kill your journey before it starts