Can we control air rage to halt delays and improve safety?

Since January, 73 percent of all in-flight incidents were caused by a failure to control air rage. 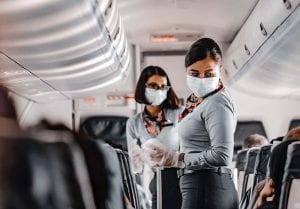 They endangered passengers and crew. Many had to be forcibly deplaned. The failure to control air rage caused flights to be delayed as long as overnight.

Since January 31, air travelers in the U.S. have been required by the Transportation Security Administration (TSA) to wear face masks on commercial aircraft. The rationale is to significantly reduce the potential for transmission of COVID-19.

According to statements at the U.S. House Transportation and Infrastructure Aviation Subcommittee, in the first nine months of 2021, 4,385 incidents of air rage have been reported to the Federal Aviation Administration (FAA) by the airlines. Of those complaints, 3,199, or 73 percent, are face mask related. That’s an astonishing average of more than 12 face-mask-based incidents of air rage every day in the U.S.

Every one of those incidents meant that, at least for a time, airline passengers chose to put the passengers and flight crew around them in serious jeopardy of becoming infected with COVID-19, a virus that has already killed more than 705,000 Americans.

Airline passengers are refusing to wear a face mask, or wear it properly, so it covers both their nose and mouth. This causes fear of contracting a deadly disease among other passengers and flight crew. Plus, it causes unnecessary flight delays.

Some passenger defiance goes much further than refusing to wear face masks.

Some of the passengers refusing to wear face masks have also resorted to obscene behavior and physical confrontation.

Teddy Andrews, an American Airlines flight attendant, testified before the U.S. House Transportation and Infrastructure Aviation Subcommittee. He asked a passenger to put on his mask properly. Andrews said, “The passenger had brought another flight attendant to tears.” The passenger exploded. He insisted he didn’t have to comply and hurled racial slurs at Andrews.

Another incident involved JetBlue personnel. A woman flying out of Boston refused to wear a mask and shouted obscenities at the flight crew. They also reported that she intentionally bumped a seated passenger. Eventually, she punched another passenger in the face when the seated passenger objected to her intentional jarring.

Many of these face mask refusal incidents have caused serious flight delays.

In New Orleans, a female passenger caused a flight to be delayed for about an hour. The plane had to return to the gate to deplane the passenger because she refused to wear a face mask. At the gate, she refused to leave the plane and had to be forcibly removed by two police officers.

This past summer, American Airlines reported that a flight from Charlotte to Bermuda was delayed overnight because a group of passengers refused to wear masks. They “became disruptive to other customers.” The group also refused to follow crew member instructions while onboard.

For passengers meeting connecting flights, the delays caused by those refusing to wear masks can result in missed flights and greatly increased expenses.

In particular, for passengers meeting connecting flights, these selfish incidents can potentially be expensive and cause serious problems. The flight delays caused by passengers refusing to wear face masks can cause airline passengers to miss connecting flights. This in turn can cause them to lose travel deposits, miss cruise sailings, and incur large extra expenses to eventually get to their destinations.

As of last week, the FAA said that the rate of air rage (unruly passenger) incidents continued to occur at more than twice the rate of late 2020.

To combat the problem, the airlines continue to put passengers who refuse to wear a face mask on their no-fly list. The FAA has proposed passenger fines that total more than $1 million aggregately against passengers already this year. Earlier this month, President Biden ordered fines doubled that can be assessed to unruly passengers. Unfortunately, the unsafe and disrespectful behavior by passengers refusing to wear face masks to prevent the spread of COVID-19 continues.

A new strategy is needed by the Biden Administration and the airlines.

Every airline maintains an air traveler no-fly list of passengers who become unruly and disruptive on their flights. Delta Airlines has proposed that airlines share their unruly passenger no-fly lists and refuse to fly anyone on the combined list. While I think that’s a good start, I believe it needs to be stronger. Airline passengers have to be put on the strongest notice possible that they must comply with all federal aviation regulations including wearing a face mask.

I believe that the Biden Administration’s TSA must take ownership of the problem and control air rage.

I propose that TSA create an unruly passenger no-fly list. The airlines will be required to report all unruly passengers. This will include those who refuse to wear face masks or act in other ways contrary to federal regulation which causes flight delays and/or the passenger to be deplaned. TSA will put them on this unruly passenger no-fly list. For the first offense, they would be banned for two years. Subsequent offensives would mean being banned for more years and possibly forever. For fairness, since mistakes can happen, there must be an appeal process, as well as a way to shorten the length of a ban after a minimum required number of years, especially if it’s permanent.

Frankly, the rules should have the force of federal law behind them. Otherwise, too many air travelers will not be persuaded to adhere to the face mask rule and other regulations. The time is long past for us to stop this behavior that is endangering the health and safety of air travelers and causing significant air traffic delays.

The CDC’s strong hand to stop a contagious COVID traveler