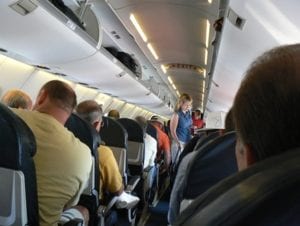 Airlines started their “Basic Coach” or “Basic Economy” configurations,  with fewer amenities and less legroom. Now they are backing off a bit, with this low-class service allowing carry-on bags and flight changes. But, without changes due to less airline seat pitch.

In the 2018 FAA Bill, Congress directed the FAA to do a study on less airline seat pitch. Did the new configurations of aircraft seating, packing more and more passengers into planes, affect plane evacuations? Can plane evacuations take place in 90 seconds with half of the doors blocked? And, does tight seating make fainting the most common infight medical emergency?

This week passenger advocates had a chance to speak to the new DOT Secretary for the first time and they brought up the issue of seat sizes and emergency evacuation. Of course, Secretary Buttigieg did not answer. No one knows because the testing with a plane filled with average passengers has not been completed. The only testing focuses on seat size.

This is an example of the need for continued consumer advocacy.

Every day, behind the scenes, consumer advocates are hard at work to make travel better. Travelers United has already learned that presenting complaints as simply one of customer comfort or passenger service gets nowhere. But, dealing with the ever-decreasing legroom as a health and safety issue may lead to change. Together with another airline passenger rights group, FlyersRights, Travelers United has been chipping away at the problems of inhumane seating. And now, after three years, Americans do not have any new answers from the government on seat sizes of evacuation. The deadline issued by Congress was October 2019. Here we are in 2021, still waiting.

At hearings held before the Advisory Committee for Aviation Consumer Protection and before Congress, arguments were made based on health and safety. They are being compromised by having less seat pitch. The arguments about space are no longer focused on customer comfort or passenger service. Today, arguments focus on safety and health.

Both issues have been studied by the FAA and DOT in the past. Both have been ignored by the FAA in its evacuation testing and airline certification processes.

Airlines did flirt with an idea of health during long-distance flights. Remember the leg exercises and bending over in your seat to stretch your back? Those stopped when seats were squeezed so closely together that an average person can no longer bend over in their airplane seat.

FAA has refused to test safety and health on planes

When consumer groups asked the FAA to reconsider its rules on seat pitch (the distance from one seat to the same spot on the next seat), they have been rebuffed. The FAA says that the considerations they used for the rule were proprietary and that they have no passenger health mandate.

Not so, FlyersRights.com argued. They won in a case settled before the US District Court of Appeals for the District of Columbia (USCA Case #16-1101 Document #1643380 Filed: 10/28/2016). However, the FAA has still not changed its regulations. Today, airline consumers have a Congressional mandate to test evacuations and seating. But, the FAA is not doing its job.

As airline seats get tighter, seats themselves become thinner and less comfortable. Plus, the width of seats is getting narrower as Americans get, shall we say, broader. Let’s face it, coach passengers are facing a squeeze that they have never experienced before in the history of aviation.

Pets, on the other hand, are protected by specific space, food, and water requirements. With the differences between the front of the plane and the back of the plane getting more dramatic, some kind of human minimum space requirements should be mandated.

READ ALSO: “Preferred seats” — How airlines get more money from you

In an article written about a decade ago, I noted that slaves and prisoners received more space than coach passengers today. Back in those days the UK was sending prisoners to Australia and the Romans were chaining slaves to their oars on their warships.

Of course, no one would want to be chained to their wooden plank. But you get the idea. Even the ancient societies had minimum standards for human cargo and their workers. It helped the forced-labor work better and guaranteed that they could survive the trip. Today’s paying passengers should at least be able to expect the same. 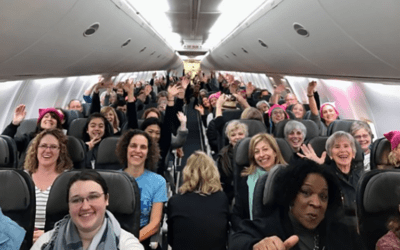