When you fly, don’t make yourself a severe air turbulence victim!

Severe air turbulence occurs during air travel. It has severely injured passengers. Prevent it by wearing your seatbelt. 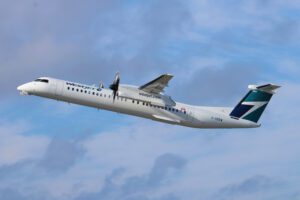 Last month, a WestJet Encore de Havilland Dash 8–400 was descending toward landing in Calgary on a flight from Seattle, Washington when it hit unexpected severe air turbulence. What is significantly disquieting about the incident is that both pilots rocketed up from the turbulence and hit the flight deck ceiling despite wearing their shoulder harnesses and lap belts. While the first officer apparently was unharmed, according to the AVHerald, the captain was injured, as was a flight attendant who struck the forward passenger door. She had her seat belt on and was seated.

Serious injury on the WestJet flight was chiefly prevented because passengers and crew wore their seatbelts.

The injuries to the flight crew weren’t serious because they were strapped in their seatbelts. Since the plane was landing, all passengers were strapped in, preventing them from becoming injured.

It needs to be clearly understood that the sole reason that no passengers or flight crew were seriously injured in this air turbulence incident is that everyone was wearing their seat belt.

Pilots avoid air turbulence when possible, but sometimes it can’t be predicted or detected in advance.

Turbulence is a serious and challenging issue for pilots, flight crew, and passengers despite advances in severe air turbulence detection and prediction. While pilots do their best to avoid known turbulence and weather that can give rise to it, some turbulence continues to go undetected until an aircraft encounters it.

In their August, 2021 Safety Research Report, “Preventing Turbulence-Related Injuries in Air Carrier Operations…,” the NTSB (National Transportation Safety Board) explains that from 2009 through 2018, turbulence-related accidents accounted for more than a third of all regularly scheduled air carrier accidents, with most of them resulting in one or more serious injuries. The injuries occurred even though the incidents didn’t result in aircraft damage.

While incidents of severe air turbulence are relatively rare, considering the number of daily flights, it can severely injure passengers and cause fatalities.

For air travelers, these are critical facts from flights occurring on U.S air carriers from 2009 through 2018:

I was on a flight during which severe air turbulence severely injured several passengers.

While most travelers who fly just a few times per year have likely endured stretches of potential air turbulence on flights, during which the captain turns on the seatbelt sign, most never encounter severe turbulence. I fly often for business and leisure and have unfortunately experienced severe turbulence. On one particular flight, we experienced such severe turbulence from wind shear that I would have been forcefully thrown against the ceiling of the plane had I not kept my seatbelt on and tightened snuggly. Three people on the flight sustained head injuries because they wouldn’t follow flight attendant instructions to wear and tighten their seatbelts. They bled from their head wounds.

There were no young children on the flight. Had there been babies or toddlers held in their parents’ laps, I have no doubt that the children would have been severely injured and at least needed hospitalization. No parent can successfully hold onto a child during severe turbulence.

What can air travelers learn from the March WestJet turbulence incident and the NTSB reports?

To prevent serious injury from severe air turbulence, the most important action to take is to buckle up while seated.

Fasten your seatbelt:
The single most important action that you can take when flying is to fasten your seatbelt snuggly whenever you’re seated during your flight, whether the seatbelt sign is on or not. While the captain will try to warn you about upcoming turbulence, sometimes there’s no warning. You must be prepared for it at all times.

Your seatbelt doesn’t have to be so tight that it’s uncomfortable, but it should be snug enough to prevent you from being thrown out of your seat in severe turbulence. Even when you’re lying down in a lie-flat seat, wear your seatbelt tight enough to keep you safe.

No parent can successfully safely hold their baby in their arms during severe air turbulence.

Babies and young children:
If you’re flying with a child under the age of two, while you’re permitted to hold them in your lap during your flight, in my opinion, children of any age should always fly in their own seat. You never know exactly when a severe turbulence jolt will occur and exert as much force as 2½ Gs. No parent is capable of holding a child under that circumstance. Parents should put their children too small to be safely restrained in a standard seat/seatbelt, in an approved child safety seat, appropriate for their age and size, strapped to their own separate seat on the plane.

Stow your gear:
To prevent them from becoming dangerous projectiles during severe air turbulence, your travel gear, when not in use, including games, tablets, cameras, laptop computers, etc., should be stowed in your carry-on or personal item. It may take an extra moment, but don’t just leave them on the floor at your seat. Don’t forget to push your personal item under the seat in front of you to prevent it from hitting you or others during severe turbulence.

Follow flight crew instructions:
Listen to flight crew directives and follow them. If the seatbelt sign is lighted, stay in your seat, or if up, immediately return to your seat. Whenever seated, buckle-up.

Severe turbulence is a real possibility on any flight. Don’t be your own worst enemy when you fly. Prepare for the worst, while hoping for the best. While I strongly suggest you follow all my suggestions to stay safe during your flight, if you do nothing else, keep your seatbelt snuggly fastened whenever you’re seated.

Yes, my family and I are going to Italy, but I have trip anxiety!

Extra time before a cruise is the best insurance