Why airlines should seat children with parents 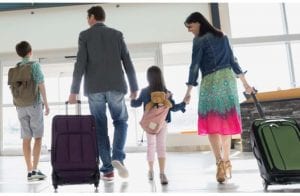 Consumer Reports sent letters today to American, Delta, and United Airlines. They called on the companies to ensure children are seated with their families on planes at no additional cost.  More than 120,000 people signed Consumer Reports’ petition to the airlines in support of this effort since it was launched just over one week ago.

“Families face a constant battle to ensure they are seated together, even when they choose seats far in advance,” said Anna Laitin, director of financial policy at Consumer Reports. “The airlines should put safety first and seat children with their families without charging them extra for it.”

Congress ordered a study of families sitting together

Consumer Reports delivered its letters to the three airlines in advance of a hearing by the House Aviation Subcommittee on Tuesday, March 3. The congressional hearing is examining the experiences of airline passengers and what can be done to improve it.  William J. McGee, Aviation Adviser for Consumer Reports, will testify at the hearing about a number of issues. His comments will include the need to ensure the safety of children traveling with their parents.

In 2016, Congress directed the Department of Transportation to “review, and if appropriate, establish a policy” to ensure airlines allow families with children 13 and under to sit together without paying additional fees. After two years of inaction by the DOT, Consumer Reports filed a Freedom of Information Act request. They asked about the status of this inquiry.  One year later, the DOT finally forwarded 136 consumer complaints to CR, while indicating that it was unnecessary to take action “based on the low number of complaints.”

Consumer Reports analyzed those complaints and discovered that some involved children as young as one or two years old. These toddlers were assigned seats apart from their parents. Other children seated separately were autistic, suffered seizures, or were susceptible to life-threatening nut allergies. CR began publicizing the issue last fall and set up a portal to the DOT’s complaint system, generating more than 600 complaint submissions in just two months. This was well over four times as many as DOT received in the previous two and a half years.

Parents who submitted complaints shared how they bought tickets and chose seats together, but the airline reassigned their seats before the flight. They were forced to pay for an upgrade or beg gate agents, flight attendants, and other passengers to switch seats with them. Other families buy low-cost Basic Economy tickets. Later they find that this fare denys them the opportunity to pick their own seats. Plus, it can put the parents in seats far from their children. Some families are told gate agents can fix the problem, but only if they are willing to pay an extra fee.

Seating children away from parents causes families anxiety. It also creates a safety risk for all passengers during an emergency.  A 2018 FBI report found that inflight sexual assaults are on the rise, with investigations into assaults on children as young as eight. Over the past week, all three airlines have maintained that they have policies to ensure children are seated with their parents.  However, the complaints submitted recently to the DOT make it clear that this problem persists. Airline policies are not always followed. Too often, the onus is put on the parents to ensure that they are seated with their children. However, the airlines control the seat map and know the ages of all of the people traveling on the plane.

“The airlines can fix this problem without government intervention,” said Anna Laitin, director of financial policy for Consumer Reports. “Ensuring that children are always seated with their parents regardless of the ticket purchased would improve safety and security for all travelers.”

Consumer Reports is an independent, nonprofit membership organization. It works side by side with consumers to create a fairer, safer, and healthier world. For 80 years, CR has provided evidence-based product testing. It also has ratings, rigorous research, hard-hitting investigative journalism, public education, and steadfast policy action. CR has exposed landmark public health and safety issues. It strives to be a catalyst for pro-consumer changes in the marketplace. Consumer Reports has always been on the front lines, raising the voices of consumers.
You may enjoy these articles from the Travelers United Blog:
Should 3- to 13-year-old kids pay extra to sit with families?
Learn latest DOT rules for improved consumer protection

Get your caffeine boost with a shot of Old World charm