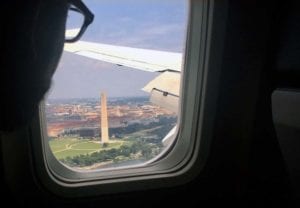 For many economy-class travelers, an exit-row seat is the holy grail of seating. And generally, everyone wants to sit in one.

As a travel agent, I’ve had several families with young children or even babies request exit-row seating to give them extra space. More than once travelers have asked for such seats to accommodate, for example, a cast after surgery.

But leaving aside that passengers DO need to be able-bodied, they also need to be 15 years and older to sit in the exit row seat. However, there are other times when, even if there’s no extra charge, a passenger might want to sit in a different row.

Exit-row seats aren’t for everyone.

Again, in general, exit-row seats are usually considered some of the best in economy class, if not the best. But this doesn’t mean they’re the best for every traveler in every situation.
Photo ©Charles Leocha

You may also enjoy these stories on the Travelers United Blog:

Protect children on planes — it’s the law>
What is the reason that half my flights arrive late?