Hilton’s made daily housekeeping by request only at all but their luxury hotels. Housekeeping will no longer remove trash or perform their other daily duties. 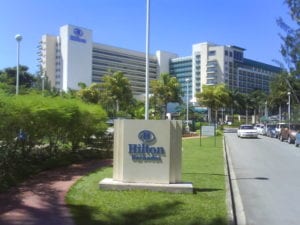 Daily housekeeping ends at Hilton and we will lose a layer of security.

The cleaning staff works on hotel security responsibilities as well. Will other staff fulfill the safety/security checks? “Cleaning” duties include much more than simply dusting, bathroom wipedowns, and bed making. Hilton ends daily housekeeping includes many other ramifications in its order.

Over the Fourth of July holiday in Chicago, an alert member of the housekeeping staff at the W Chicago – Lakeshore hotel, overlooking the Ohio Street Beach, may have prevented a mass shooting. Crowds were to gather on the beach to watch the Independence Day fireworks at the nearby Navy Pier. On the Fourth, Chicago Police, alerted by the housekeeper, confiscated a semi-automatic rifle with a high-powered scope and laser left “in a very suspicious position” in a room overlooking the beach.

Then, just last week, at the Maven Hotel in Denver, two blocks from Coors Field where the upcoming Major League Baseball all-star game will be played, police acting on a report from a hotel housekeeper, removed 16 long guns, body armor and a lot of ammunition from a room which had a balcony overlooking Denver’s downtown. Police arrested three men and a woman, indicating they feared there were plans for a “Las Vegas-style shooting.”

The 2017 Las Vegas mass shooting referred to by Denver police was at the Mandalay Bay Hotel, where Stephen Paddock killed 60 and in addition caused almost 1,300 others to be wounded or injured in the resulting panic.

Hilton has made its COVID pandemic-induced elimination of daily housekeeping service permanent.

Coincidentally, last week Hilton made daily housekeeping available only upon request at its non-luxury hotel brands. Daily housekeeping was temporarily eliminated at most of the world’s hotels for safety considerations in the spring of 2020, due to the COVID pandemic.

As the US has been slowly coming back to “normal,” hotels have been reevaluating their housekeeping services. At Hilton, while they made daily housekeeping by request only, they will continue to clean rooms every fifth day for guests making extended stays, as well as after each guest stay.

Some travelers are pleased that housekeeping won’t bother them during their Hilton stay. They will miss hotel security.

Many travelers are pleased that they won’t have to deal with daily housekeeping. Originally, I thought that, too. After all, except in locations in which towels won’t dry overnight, I’ve avoided fresh towels daily for years to help the environment. At home, we make our bed daily but don’t change the sheets every day. We don’t clean our bathroom, vacuum the rug, or dust each day. Why should hotels be different? Of course, housekeeping does more than that when they enter hotel rooms for cleaning.

With the elimination of daily housekeeping, I’m concerned about potential, serious unintended consequences that may result from it.

Hotel housekeepers do much more than make beds, vacuum, dust and clean the bathroom. The cleaning staff restocks toiletries, toilet paper, drinking glasses, and writing gear. They restock the mini-bar, if there is one. They replace towels. Cleaners remove all trash and garbage from your room, as well as any room service trays. They replace burnt-out light bulbs and call in maintenance to repair any leaks and damage.

While it should be easy to get towels and toiletries upon request, some items may be difficult and take a lot of time to obtain.

You’re right that if we want something stocked in the mini-bar, we can call the front desk and if it takes some time, the world won’t end. We can also ask for some extra toiletries and towels before they’re totally out. In fact, when housekeeping is cleaning some rooms in the morning, if we’re there, we can always get needed items directly from the housekeepers in the hall doing the between-stay cleanings.

Room trash and garbage are a big daily concern. Guests will likely put them in the hallway for pickup, which will make walking to your room unpleasant at best.

On the other hand, it’s not easy to get clean glasses, extra bags for the ice bucket, or light bulbs. More important — and more of a problem — is trash, garbage, and in some hotels, used room service trays. I’ve seen what’s happened with the trash and garbage during the pandemic. Most of it ends up in the hall in the evening. It’s messy, unsightly and frankly, it’s smelly. Rodents are about the only hotel “guests” attracted by the mess. It takes far too long for housekeeping to clean the halls, especially at night.

Like others, I’m concerned about housekeeping’s ability to fulfill requests while continuing reduced housekeeping with a substantially decreased staff size, as planned by Hilton.

Replacing the daily hotel safety inspections by housekeeping is a major concern.

The other critical duty that housekeeping has performed since the 2017 Las Vegas mass shooting is the daily room safety/security check. Paddock took several days to prepare for the mass shooting. Therefore most US hotels and many elsewhere don’t permit guests to keep hotel staff out of their rooms for more than 24 hours at a time. With daily housekeeping a thing of the past, Hilton must find a way to continue daily room hotel security inspections. Otherwise, incidents like the two recent ones mentioned above will turn into tragedies.

Hilton needs to institute a modified daily housekeeping service to maintain essential daily housekeeping duties for all rooms. The daily duties should include trash, garbage, and room service tray removal, lightbulb replacement, plus glasses, bag, and toiletry restocking. Most important, safety/security checks must occur on a daily basis.