Aviation and environmental leaders work together to pass the Sustainable Skies Act. 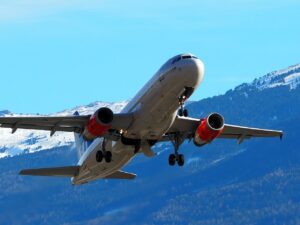 United Airlines CEO Scott Kirby, Airlines for America (A4A) CEO Nick Calio, and the Environmental Defense Fund’s senior vice president for climate Nathaniel Keohane, stood side by side as the Sustainable Skies Act was introduced last year. These leaders work together to push the passage of a momentous bill that promises to reduce aviation industry carbon emissions. They all realize that the development of sustainable aviation fuel (SAF) is only one of the first steps in the reduction of carbon emissions. Working toward the goal of carbon emission reduction will continue.

H.R.3440 – 117th Congress (2021-2022): Sustainable Skies Act has been almost a decade coming. Years ago, when environmental groups were battling airlines, Travelers United met with the Environmental Defense Fund to show how economic reality was matching environmental needs. Any carbon emissions that aviation reduced resulted in an increase of the industry’s bottom line and created a better environment. The goals of environmental carbon reduction and industry profits fit together.

Travelers United’s discussions continued with congressional staffers on the Senate Commerce Committee and with the House Transportation Infrastructure Committee and with aviation stakeholders. Finally, as the two groups of advocates began to speak and work together, they realized finally that aviation’s profit motive supported environmental action.

Everyone involved knows that this is the first step in dealing with carbon emissions reduction. But it is an important first step. Even more extraordinary is the joining of the environmental world and the aviation economy. Their partnership promises a path toward increased fuel savings and the elimination of the plague of carbon emissions.

Two letters were sent to Congress — one from environmentalists, the other from travel stakeholders

This is the letter that was sent to the House of Representatives bill sponsors. It was signed by almost 60 different aviation organizations, airports, unions, manufacturers, and consumer groups. Combined with the letter sent by environmental groups signed by more than 50 organizations shows an amazing confluence of support. [Subheads were added to make the content more readable.]

As organizations committed to addressing climate change, we are writing to express our strong support for the H.R.3440 – 117th Congress (2021-2022): Sustainable Skies Act. This bill will help increase the production and uptake of sustainable aviation fuel (SAF) and reduce the aviation sector’s reliance on petroleum-based jet fuel, ensuring real reductions in aviation emissions. We applaud you for introducing this bill and stand ready to assist in whatever way we can to ensure the measure is approved by both chambers of Congress.
…
Notably, a broad coalition of environmental and other stakeholder groups, having called for the establishment of a SAF blender’s tax credit (and other SAF tax credits) in their February 22, 2021, letter to the leaders of the House and Senate, agrees. [The letter from the environmental groups includes endorsements for this path toward sustainability from the nation’s largest advocacy groups.]

Recognizing that improving fuel efficiency with today’s petroleum-based energy supply can only take us so far, the aviation industry is keenly focused on energy transition. In that regard, SAF is one of the most important levers available to reduce aviation emissions. And SAF is particularly vital since, unlike the ground transportation sector, significant segments of aviation cannot electrify in the near- to medium-term and will remain reliant on liquid fuel for years to come.

Despite the aviation industry’s concerted efforts, there is very limited availability of SAF today, and the SAF that is available is significantly more expensive than conventional jet fuel. Moreover, SAF is not currently competitive with similar low-carbon transportation fuels for the ground sector in part due to the incumbent status of those fuels and a policy environment that favors them at the federal and state level. The Sustainable Skies Act would help immensely in the effort to scale up the supply of SAF, enhance its cost-competitiveness with conventional jet fuel, provide needed policy parity, and transition the SAF industry from its current nascent stage to a mature industry capable of providing airlines, general and business aviation, and other users with sizable quantities of the low-carbon fuel at commercially reasonable prices.

This is an important first step toward carbon control

Make no mistake, SAF is of critical importance to the aviation sector and its efforts to minimize GHG emissions. We all need the SAF industry to be scaled up successfully so that aviation, and our nation, can meet its climate goals. A performance-based blender’s tax credit is not the only policy we would like to see put in place for SAF, but it is in our view the most significant. We wholeheartedly support your bill, thank you for your leadership on this key issue, and reiterate that all of us stand ready and willing to assist in ensuring that the Sustainable Skies Act makes it to the President’s desk.

Don’t let food allergies on a cruise ruin your vacation