These are the easiest airports to reach by public transportation 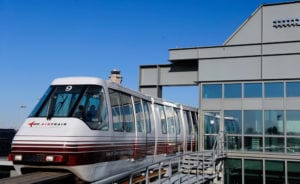 Getting to and from airports is becoming one of the more time-consuming parts of airline travel. Many cities have begun to pay attention to the links between airports and the city center. These 10 have excellent airport public transportation.

When it comes to getting into the center of a US city you’re visiting from the airport, or getting to the airport for a trip out of town without worrying about parking, a taxi or airport shuttle van springs to mind first for most Americans. However, there are many cities where convenient and very affordable (compared to a cab or shuttle) bus or rail transit options exist that make the city-to-airport trip a breeze. Some are well known, others are hidden gems. Here’s an overview of ways to get to major airports from downtown in the top 10 airports serving US cities (fares listed are as of August 2017 and are full adult one-way fares; discounts are usually available for seniors, children and people with disabilities).

This is a list of the Top 10 Airports reached by public transportation. This list of the busiest airports in the United States comes from Wikipedia. Some of these airports are listed together with other regional airports, as in the case of Los Angeles, Chicago/Milwaukee, and San Francisco.

The other airports which can be easily reached on public transportation can be found on our resource pages.

1. Hartsfield–Jackson Atlanta International Airport
Take the MARTA Red or Gold Lines (metro rail) from the airport station at the main terminal into downtown (Five Points station is the main transit hub). Runs every 5 to 20 min.

• Ontario Airport: Take OMNITRANS route 61 from the stop on Terminal Way in front of the terminal to Pomona Downtown Metrolink station; transfer for Metrolink’s Riverside Line to L.A. Union Station, Riverside, San Bernardino or other points.

3. Chicago/Milwaukee
• O’Hare International Airport: Take the CTA Blue Line rail from the terminal into downtown, or take a free shuttle from the terminal to O’Hare Transfer Metra commuter rail station and ride seven or fewer stops on North Central Service into Chicago Union Station (Metra service is not very frequent, but is more comfortable).

READ ALSO: Never do these 14 things at airport security checkpoints

Fare: $2.50 on DART; $5.00 to Dallas or Fort Worth on TRE
Luggage space: Overhead racks; racks on lower level of TRE train cars

5. John F. Kennedy International Airport
• JFK: Take the A train subway to Howard Beach/JFK station, the E, J or Z subways to Sutphin Blvd/Archer Av/JFK station or Long Island Rail Road (one stop from Penn Station) to Jamaica station to catch the JFK AirTrain monorail to the terminals.
Travel time: 35 minutes (by LIRR) to 1 hour, 15 minutes (by subway) from Manhattan.
Fare: $5 for AirTrain plus $2.75 for subway or $14.00 ($16.00 at rush hours) on LIRR.

• LaGuardia Airport: Take the M60 express bus from Harlem/125th Street station in Manhattan (4, 5 or 6 subway or Metro-North Railroad) or Q70 express bus from 61st St/Woodside station in Queens (7 subway or Long Island Rail Road).
Travel time: About 30 min, depending on traffic, from the rail station to the airport on either bus route.
Fare: $2.75 for the whole trip if done by subway plus bus using MetroCard. $9.00 to $14.00 plus $2.75 if using LIRR or MNRR to connect with the bus.

6. Denver International Airport
Take the RTD University of Colorado A Line regional rail directly from the main terminal to Denver Union Station, in the heart of downtown.

• Oakland Airport: Take the AirBART elevated people mover between the terminal and the Oakland Coliseum station, where you can catch BART into S.F. or other East Bay points, or catch Amtrak’s Capitol Corridor to San Jose, Sacramento and intermediate points. BART runs every 6-15 min. Capitol Corridor runs every 1-2 hours.

Travel time: 35 min from airport to Embarcadero station
Fare: $10.20 on BART (including AirBART)

9. Charlotte Douglas International Airport
Take CATS route 5 bus from the terminal to the Charlotte Transportation Center in Uptown, where you can connect to LYNX light rail, streetcar and all other bus routes. Runs every 20 min.