Many travelers have hidden, invisible disabilities. It’s time that the travel and hospitality industry recognizes this and helps these travelers just like they already do for travelers with disabilities they can see. 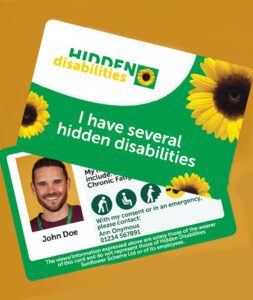 When we see someone in a wheel chair, using a walker or cane, or with a seeing eye dog, we recognize and accept that they have a disability. Often we can even identify people with other disabilities such as autism, Down Syndrome, Tourette’s or Cerebral Palsy by seeing how people move and act. There are also invisible, hidden disabilities that are just as serious as those that are visible.

Invisible disabilities include some forms of visual and hearing impairment, chronic pain from a variety of diseases and conditions, breathing problems that periodically require assistance, etc. There are debilitating mental illnesses that you can’t tell that someone has merely by looking at them. Travel for those suffering from anxiety disorders can be particularly difficult. There are many, hidden disabilities that defy visual observation.

Fortunately, there is a program to help people with hidden disabilities obtain the assistance they need. It’s called The Hidden Disabilities Sunflower program. Its goal is to make the invisible visible.

Living with a hidden disability makes life and travel challenging and sometimes very difficult, especially when the conduct of those around a disabled person is one of disbelief and skepticism because they can’t “see” it.

61 million Americans live with a disability.

According to the Centers for Disease Control and Prevention (CDC), 61 million adults in the U.S. live with a disability.

To most Americans, disability means using ramps, special toilets, grab bars and other architectural accommodations. To others, it may mean closed captioning and large print newspapers and magazines.

For most people, disability doesn’t mean invisible hearing issues such as in restaurants that configure themselves to be noisy because it’s good for business, which makes it more than difficult for the invisibly hearing impaired to order a meal and hear and understand the answers to their questions about food contents to ensure their safety from severe allergies.

For most people, disability doesn’t mean invisible chronic pain issues such as many have from osteoarthritis, fibromyalgia or shingles, which makes standing in lines in stations while sightseeing and moving through airports more than difficult at times.

For most people, disability doesn’t mean invisible diseases like lupus or cancer which may cause both chronic pain and extreme fatigue which requires them to periodically sit to rest or board a plane early because they are sometimes slow moving and need time to settle in.

For most people, disability doesn’t mean invisible mental problems and disorders that can cause a host of issues that make travel more difficult, especially on long flights and when people are in unknown and unfamiliar circumstances.

For most people, even with the COVID pandemic constantly in the news, disability doesn’t mean invisible problems of “Long COVID” which can cause all manner of problems for travelers that require assistance from time to time.

According to Disabled World, “It is estimated that ten percent of people in the U.S. have a medical condition that could be considered a type of invisible disability.” That’s more than 32 million Americans with a disability that can’t be known by someone just by looking at them.

In the U.S., the Americans With Disabilities Act (ADA) requires businesses, public facilities, transportation and telecommunications to make accommodations for both mental and physical conditions. The conditions don’t have to be extremely severe or permanent, nor do they have to be visible for the ADA to require accommodation. To be considered a disability, the condition must create a physical or mental impairment that substantially limits one or more of life’s major activities.

Too many people with invisible disabilities are unfairly thought to be fakers, gaming the system.

Too often people with invisible disabilities, particularly if they are young and look healthy, are accused of taking advantage of the system because they’re either faking their condition all together or really aren’t “that bad.” Sometimes people with invisible disabilities are mocked, particularly if their condition requires an unorthodox solution, such as a room with no florescent lighting or a quiet, calm area.

I’ve gone to restaurants in which the server was unpleasant at best when I asked her to stand next to me and repeat what she told the people on the other side of the table, even after pointing out my hearing aids. The hearing aids can’t always overcome noisy restaurant environments.

The solution for helping travelers overcome issues of their invisible disabilities starts via identification. Somehow the invisibly disabled must be able to identify themselves in a way that doesn’t compromise their dignity as human beings.

It’s not easy for someone who looks healthy to ask for help because of a hidden disability.

It isn’t easy for many to summon the strength to go up to an airport gate agent to explain that they or their companion needs assistance and why. Much of that is due to the long history of many being dismissed as fakers or passengers trying to “game the system,” unless they were in a wheel chair. It isn’t even easy to ask a flight attendant for a little assistance to get up to go to the lavatory on a long flight if one’s arthritis has made them painfully stiff.

The Sunflower ID is a good start for businesses to help those with invisible, hidden disabilities.

The Hidden Disabilities Sunflower Scheme Limited company has created a way of “quietly” identifying those with invisible disabilities. It’s their Sunflower ID. You can wear it on a lanyard around your neck, as can your companion. It alerts those in the program that you have a disability and may need some assistance. It’s planned well enough that most people who aren’t in the program will understand the ID’s meaning. The IDs can show through words and icons what some of an individual’s disabilities are.

For travelers in the U.S., 59 airports are already Sunflower airports or are in the midst of setting up as one. There are almost 100 airports that have signed up as Sunflower airports in the remainder of the world. What’s needed now are the world’s major airlines to join the program, as so far it has just Turkish Airlines, British Airways and Air New Zealand. Hotel chains should be joining this great program, too.

It’s time for the travel and hospitality industries to recognize the problems of travelers with visible and invisible disabilities and commit to helping them.

The travel and hospitality businesses that join the program can get training assistance and through the program demonstrate their commitment to accessibility and essential assistance for those with disabilities who wish or need to travel.

It’s long overdue that the travel and hospitality industries recognize the problems of travelers with disabilities, both visible and invisible, and make a commitment to help them be able to enjoy the benefits of travel along with everyone else in the world.