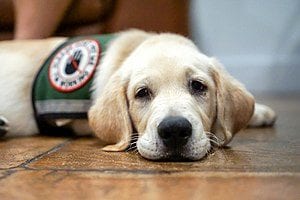 Department of Transportation has just released its new emotional support animal rules. What started out as a way to get your pet aboard planes without paying extra to fly with passengers has become a major problem for airlines. Vague definitions of support animals have led to lax enforcement.

The certification of ESAs has become a scam.

Scores of websites promise to send the documentation that states any animal is an emotional support animal. And, according to current law, airlines are not allowed to question these medical determinations.

The new DOT guidance allows airlines greater latitude in handling emotional support animals (ESA). Until this guidance, ESAs had been pigs, snakes, and even peacocks. Now, airlines can refuse to carry many species other than dogs, cats, and miniature horses.

DOT’s disability regulation will permit airlines to determine, in advance of flight, whether any service animal poses a direct threat. Airlines will also be allowed to ask animal owners for documentation that verifies their pets have been properly trained and vetted. The airline actions may not unduly restrict passengers with disabilities from traveling with their service animals.

Everything from leashes and pet carriers to providing airlines advance notice cannot be required by airlines. However, case-by-case assessments can be made by airlines prior to flying ESAs. And, in order to not restrict any passenger’s freedom to travel, no advance notice about bringing emotional support animals aboard a flight can be required.

The airlines will be allowed to check-in ESAs in the lobby prior to arrival at the departure gate and they can be required to check in an hour before take-off. Airlines will have time to assess the animals. And, airlines can ask questions about a passenger’s disability that requires an ESA. No longer do the airlines have to accept ESAs without any kind of questioning.

The number of pets in the passenger cabin can be limited, but not emotional support animals

The new guidance also ensures that ESAs can fly no matter how many animals are aboard a flight. Pets, on the other hand, are limited to a certain number per flight.

Under this new guidance, airlines will be allowed to bar large pets from the passenger cabin. However, there is no categorical ban on animals over a certain weight limit. The lack of size and weight limitations applies to all aircraft — both large main airline fleet planes and smaller regional carriers.

READ ALSO ON TRAVELERS UNITED: Strategies that can get you home during weather-delay roulette

DOT does not have any age limits on ESAs. The only real control is that animals must be house-trained. DOT did say that airlines can prohibit service animals younger than four months. And, the list of ESA rules (or lack of them) goes on to cover the ability of an animal to remain house-trained for flights longer than eight hours and what kinds of mental illness documentation can be required from passengers before they are allowed to travel with their emotional support animal.

The DOT should protect the legitimate right of passengers with a disability to travel with a service animal and adopt the definition of service animal from the Americans with Disabilities Act (ADA). We thank DOT for the important work undertaken on this critical issue, recognition that additional changes are needed to Section 382.117, and look forward to the eventual rule changes that will ensure a safer and healthier travel experience for all.

More than 75 organizations all signed this letter to the Secretary of Transportation. Service Animal Coalition Letter