For years, I thought I had a REAL ID driver’s license. I was wrong

Many people believe they have REAL IDs when they do not. The charts and maps that show which states are compliant have created REAL ID confusion. The Department of Homeland Security (DHS) and Transportation Security Administration (TSA) website information is misleading.

NOTE: To fly domestically, a REAL ID is not totally necessary. There are alternatives such as having a US Passport, PreCheck Card, or Passport Card. However, many potential passengers believe that their current driver’s license will serve as an acceptable form of ID. It will, but only if it is REAL ID compliant. This article focuses on whether or not current licenses actually are considered REAL IDs. 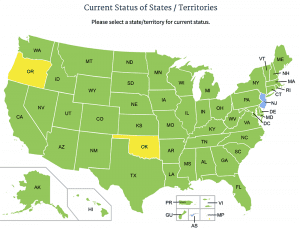 This map says that the green states are REAL ID compliant. They are not.

When travelers go to the Homeland Security (DHS) REAL ID page, the confusion begins. A large block of type in the upper right-hand corner of the page shows that the REAL ID DEADLINE is October 1, 2020. Then a big map shows REAL ID-compliant states. The problem is that the map is not accurate, nor are the following state pages. For me, this sowed plenty of confusion and I know that it has sown confusion for others as well.

If anyone using the DHS REAL-ID page goes to the individual state ID drop-down menu, they would reach a page like this one for the State of Virginia.

Virginia, like any other state colored green, has issued REAL ID driver’s licenses, but until US citizens have a small star on their license, they do not have a REAL ID. A citizen trying to determine whether his or her ID is considered a REAL ID needs to keep digging. Do not believe what DHS and TSA say on their maps.

I then clicked on the Frequently Asked Question (FAQ) page. I found several questions that I didn’t even think I needed to ask, like “Are all states issuing REAL ID-compliant cards?” and, “How do I know if my license or identification card is REAL ID compliant?” The answers here tell me that my Virginia driver’s license is not REAL ID compliant.

As of September 5, 2019, 50 states and territories are fully compliant with the REAL ID requirements, and all states are on track to begin issuing compliant licenses and IDs by the October 1, 2020 deadline.

A REAL ID looks like this. Note the star in the upper right-hand corner.

Make sure to check for the star. Since we began this REAL ID journey way back in 2005, I have been sitting fat, dumb, and happy until I learned that I needed a star on my license. Just having an ID from Virginia did not make it a REAL ID.

I was living with REAL ID confusion. Really, I wasn’t confused; I was certain that my ID was REAL ID-compliant. However, the government did a terrible job telling American citizens about whether or not their ID really is REAL ID-compliant.

Here are the details buried in the FAQs on the TSA REAL ID page.

How can I tell if my license/ID is REAL ID compliant?

REAL ID-compliant licenses are marked by a star on the top of the card.

Washington state issues enhanced driver’s licenses only. These documents will be accepted at the airport security checkpoint when the REAL ID enforcement goes into effect.

If you’re not sure, check with your state driver’s licensing agency on how to obtain a REAL ID-compliant card.

Bottom Line: Do not be confused by generalities. Make sure your ID has the necessary star that makes a REAL ID.

Now, find out what action you will have to take to become REAL ID-compliant.