What you need to know about TSA and CBP Facial Recognition

Facial recognition is not a violation of privacy. Passport and visa photos already exist to allow the system to work. 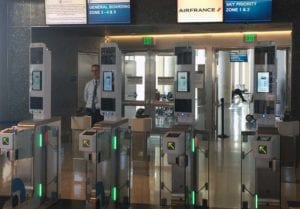 I was just reading a fundraising letter for a progressive organization that was sent to me by a friend. The letter excoriated the Transportation Security Administration (TSA) for getting ready to require mugshots from passengers in order to fly. In an era when fake news has been decried on both partisan sides of the aisle, we do not need facial recognition misinformation.

I realize that no fundraising opportunity should be passed up, but using false information and incomplete information to ramp up an inflammatory fundraising effort is not what the country needs today. With facial recognition being tested at more and more airports and being rolled out across the nation, the basics need to be accurate and understood by all American citizens.

The European Union has used facial recognition for years.

In Europe, facial recognition has been tested and used for several years. Most large airports have automatic lanes where incoming European Union citizens are screened using facial recognition. While incoming foreigners wait in lines that snake up to passport inspectors and often stretch on for hour-long waits, the EU citizens can zip through passport control in minutes and be on their way to connecting flights. 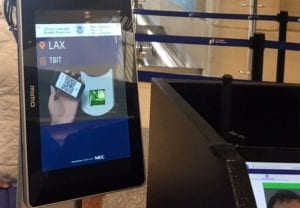 Facial recognition is being tested at eight international gateways in the US.

During my visits to three international gateways, entire planeloads of Boeing 777s and 747s were loaded at the jetway where the facial-recognition systems were installed in less than 20 minutes — some as quickly as 15 minutes. The bottom line: Boarding was faster and more secure for the country.

Facial recognition images of US citizens taken at airports are not stored. Photos of non-US citizens are retained for up to 14 days. 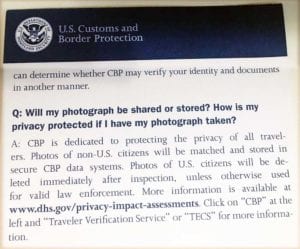 According to the August 14, 2018, Privacy Impact Assessments for the Traveler Verification Service (DHS/CBP/PIA-030(e)):

CBP does not retain images of U.S. Citizens in ATS-UPAX but does retain images of non-U.S. Citizens for up to 14 days for confirmation of the match, as well as evaluation and audit purposes. CBP deletes all photos, regardless of immigration or citizenship status, from the TVS cloud matching service within 12 hours of the match.
…
In an effort to mitigate the impacts of this expanded collection, CBP seeks to minimize the data it maintains by purging facial images as quickly as possible after use. Each traveler’s biographic and biometric data is deleted from the TSA-issued device, either at the time of the next passenger’s transaction or after two minutes, whichever occurs first.

The fundraising letter noted that TSA wants to make airport security more invasive and that they plan to team up with Customs and Border Patrol to go through a facial recognition for domestic travelers. THIS IS NOT TRUE! The CBP programs being tested across the country are designed for border, visa, and passport control. There are no plans to employ facial recognition for domestic travel.

All images of US citizens used by the CBP at border control points are immediately destroyed. Photos of foreign visitors traveling with passports and visas will be retained for 14 days and then destroyed.

DOT to Consumers: Drop dead, no protections for you!

How to turn passenger protection into airline security