Passport Card: Does it make sense to purchase one? 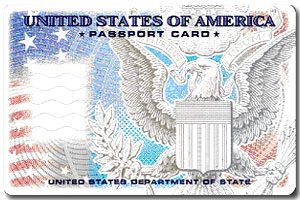 Since the inception of the U.S. passport card, I have advised the vast majority of US citizens to obtain a U.S. passport, not a passport card, as their travel identification document for international journeys. I haven’t changed that recommendation.

The passport card’s usefulness as an international travel identification  document is so limited, it’s not adequate for most of its intended use.

You can imagine my surprise when I found myself putting an “X” in the checkbox on my U.S. passport renewal application, to get a passport card with my new passport.

Personally, I’m still carrying my U.S. Passport whenever I leave the country. So what’s changed to induce me to spend an extra $20 for a passport card?

I found a worthwhile use for it. My passport card will be my travel ID back-up. At $20, when you get it with a passport, I think it’s worth it.

Here’s some of the basic facts about using your U.S. passport and passport card, so you can understand my decision.

On the other hand, the US passport card is only accepted as a U.S. citizen’s official travel identification document by 20 of the world’s nations; Canada, Mexico, Bermuda, and 17 island nations of the Caribbean. For travel to every other nation of the world, U.S. citizens must use their passport. Furthermore, the passport card may only be used for international travel, on land and sea. Use of the passport card for international air travel, to and from any nation, including the 20 listed above, is prohibited.

That means there are only two basic uses for the U.S. passport card;

• Driving between the U.S. and Canada, or between the US and Mexico, and
• Taking a cruise from the U.S. to Canada, Mexico, Bermuda, and/or many Caribbean island nations and back.

Unfortunately, some citizens traveling only with a passport card on those journeys, may be heading for trouble.

Those driving to Canada or Mexico, or on a cruise, only with a passport card, who encounter an emergency, can’t use their passport card to fly back to the US. Emergencies can happen. The traveler, a family member, friend, or traveling companion may become seriously ill and need to return to the U.S. quickly. Travelers sometimes need to return home for an emergency there. Armed with only a passport card, U.S. citizens won’t be permitted to board a plane back to the U.S.

While on a cruise, it’s not unknown for passengers to arrive late for the cruise’s embarkation, missing the ship, and sometimes (It happens more often than most people think.) passengers miss their ship’s sailing from port due to a variety of reasons. This means a cruise passenger would have to fly to the next port of call, or back home to the U.S. As above, if a citizen doesn’t have their passport, they won’t be permitted to board the plane.

According to the U.S. Department of State, 2.7M passport cards have been issued thus far. When might it be safe for those citizens to use their passport card as their primary identification for international travel? Many U.S. citizens live near the border of Canada or Mexico. They often travel to those countries regularly for shopping, and to purchase medical and other services. Generally they’re traveling less than 50 miles from home. The passport card should be a safe bet for them, but for other travelers, including cruisers, it’s foolhardy to do so, in my opinion.

If my passport is lost or stolen while out of the US, it will provide the identity proof I need to quickly obtain a replacement passport. I believe our embassies will prefer it to a paper color copy of my passport.

While traveling domestically, if my state driver’s license is lost or stolen, I won’t be able to get a new one until I return home. A passport card is an acceptable ID for flying domestically, according to TSA. While you’re not absolutely required to have a government issued photo ID to fly domestically, having one will surely make it easier getting through TSA security.

So, there is a good rationale for any U.S. citizen to have a passport card; “back-up.” It’s just not the purpose envisioned by Congress.

Is this a humorous TSA story or a painful one?

Next up from the airlines – pay credit card fees to avoid other fees.

Learn how to travel healthily and avoid a sick vacation

Don't make financial mistakes which can ruin your vacation, part 1