Dogs are winning and families are losing in the confusing sky

Dogs are winning on airlines. Humans get the scraps. 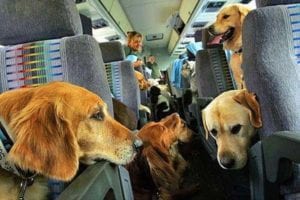 Something is amiss in our upside-down aviation industry and our government. Dogs are winning over humans on planes and families have no right to sit together. This is the outcome of government policies created to help the emotionally challenged when mixed with airline policies of profits as the ultimate goal.

Honestly, I sometimes think that every airline has a VP of Passenger Misery. This VP’s unfortunate job is to think of new ways to irritate their paying customers, deceive passengers, and make flying less comfortable. At the same time, airlines will bend over backward to keep a passenger’s pet happy. National reaction to everyday indignities faced by airline passengers is considered by the public part of the cost of getting from here to there. (Dr. Dao’s episode being dragged off of a United flight is an exception.) However, if a pet is mistreated there will be social media outrage.

So, can the airlines really be blamed if dogs are winning and passengers are losing?

I wrote an article several years ago titled, “Airline passengers beg, ‘Treat us like dogs.’” In that article I noted that pets were accorded very specific space on planes and in their kennels. The International Air Traffic Association illustration of room for pets shows space that humans are denied.

In an article written about a decade-and-a-half ago, I noted that slaves and prisoners received more space than coach passengers back in the days when the UK was sending prisoners to Australia and the Romans were chaining slaves to their oars on their warships.

Those airline policies dealt with personal space on planes. The policies are still being debated. However, today, twin issues of how to handle canine support animals and how to treat human families are front and center. In an upside-down world the Department of Transportation has decided that a study of how to deal with emotional support animals is necessary, while a study about the need for children (13 years old and younger) to sit together with parents is unneeded.

An article in the Wall Street Journal explains the current state of emotional support animals on planes. Clearly, passengers are taking advantage of the Air Carrier Access Act (ACAA). It is not right.

Delta says it has had six biting incidents in the past 60 days. The airline now carries about 700 emotional-support animals and service dogs on flights each day, up from 450 a day in 2016. The total number of animal incidents on airplanes—from urination to barking to biting—has increased 84 percent since 2016, says Gil West, Delta’s chief operating officer.

In June, a Delta flight attendant was badly scratched by a pit bull and Delta banned that breed from riding in its cabin. “I think we’ve hit a tipping point,” Mr. West says. “We’re very concerned about the safety of our customers and our crew.”

Airlines and consumer travel advocates are urging the DOT to make guidelines in the Air Carrier Access Act similar to the Americans With Disabilities Act. The ACAA is far broader.

On the flip side, two years ago Congress passed a law mandating that familiy members 13 years old and younger be allowed to sit with another family member older than 13. There was a caveat: If DOT determined it was necessary. So far, with no discussions, no input from family advocates, no studies from consumer advocates, no comments from psychologists, or any statements from airlines, DOT decided that no regulation was necessary. Dogs are winning.

DOT is thumbing their nose at families and studying the needs of emotional support animals.

For the airlines everything comes to money, greed, and profits. That airline money grab is exactly the reason that both airlines and passengers are facing issues with less overhead storage space, uncontrolled emotional animals on planes, and families being separated by airline personnel.

It’s a dog’s world up there in the sky. But, today, when dogs are winning, it seems to be a better world with more protections than that of human airline passengers.

How to sail happy. Follow these cruise line rules