How to discover the world while driving through Maine

Discover the world in the state where you spent most of your life. It can surprise you 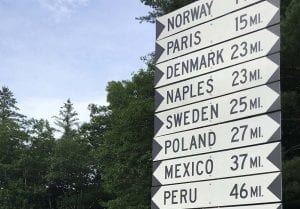 A year ago at this time, I had already been to Cuba and Portugal and was looking forward to a week in Venice. I feel a need to discover the world. Today, my travel list seems empty. I have gone to nowheresville and nothing central as we hide from the pandemic.

Like many, I am really tired of staying home and strolling down Pine Street. I keep thinking that I should be wandering down the Champs Elysées in Paris, France, or driving along the Bay of Naples in Italy.

I live in Maine, so I have always traveled somewhere else to see wonderful sights, museums, spectacular architecture, and history. My state has a lot to offer, but I never seemed to think there was much zing! Certainly no evocative sidewalk cafés, gliding gondolas, or raging bulls running down the street. I never felt in Maine I could discover the world.

So, I went crazy and I headed out to Mexico, Peru, Paris, and Norway one day. The next day I explored Denmark, Naples, Poland, and Sweden.

Impossible you say?  Not if you live in western Maine.

All I had to do was follow a famous sign in Maine to discover the world and its enchantment.  For years, I have driven through the towns or saw their names on signposts. They were the perfect trips – no packing suitcases, no passport, no long flights, no extensive planning.

How these towns got their names — go figure

It seems back when the area was getting settled in the late 1700s and early 1800s, the settlers celebrated freedom. Many were former Revolutionary War soldiers or their descendants. They had a strong affinity for other countries fighting for their freedoms. 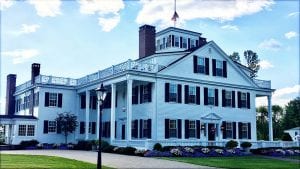 The actual countries of Mexico and Peru were both battling Spain for their independence when their namesake towns were incorporated in 1818 and 1821, respectively. And, Denmark has a similar story. Copenhagen in Denmark had just suffered an attack from the Royal Navy. So the Andover, Massachusetts, settlers named their new town for the country in a show of solidarity in 1807.

Naples, settled where two lakes meet, was named because of the curve of the bay. Villagers thought it resembled that of the Italian city (although I question if any of the settlers had been to Naples in Italy). Paris was named as a thank you to the French who fought with us in the Revolutionary War, while Sweden just seemed to have been arbitrarily named for the European country.

Then we have Poland and Norway. Surprise – they have their names due to the indigenous Native Americans from the region. Poland was a noted Native American chief of the region. Norway was the result of a series of mistakes of spelling the Native American word “Norridge.” It means waterfall. I never made it to Maine’s China, but supposedly it was named for a popular song.

I never found European sophistication, like cafés, museums, or antiquities, or just foreign ambiance. I did find an amazingly scenic western Maine. Very green, innumerable mountains to go over or around or just to look at in the distance, and with water – rivers, streams, ponds, lakes – everywhere. Pizza, extended farmhouses, Federal-style houses, and a mansion or two. Plus, there was local and national history around every corner.

Have to note, however, that the Apple Maps that I used on my iPhone just don’t quite get rural Maine. Twice it took me up a narrow road and then told me to get out and walk the rest of the way. What!?! Thank goodness I had my old-school DeLorme Maine Atlas with me that I bought at White Birch Books, in North Conway, the NH gateway to Western Maine.

READ ALSO:
Get your caffeine boost with a shot of Old World charm
Look into the soul of Alaska at the Anchorage Museum

Poland has a famous spring and a gilded-age mansion 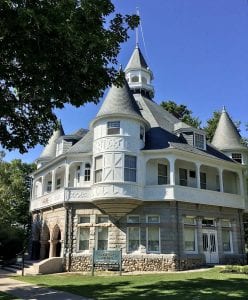 But, back to my adventure. You may know Poland Spring water, which began in Poland, Maine, known for its many springs. In the early 1800s, the water was recommended for “some diseases of the kidneys and associate derangements,” as its history states.

The Poland Spring Preservation Park was very quiet on the day I visited. The buildings were closed due to the coronavirus. I could still walk around the grounds and the buildings and take in what was a “Gilded Age” tourist attraction. It’s interesting to note, that the Maine State Building, which is appropriately made of granite, hardwoods, and slate from Maine, was dismantled after being originally constructed as the state entry for the Chicago Worlds Fair of 1893. Then it was carefully rebuilt stone by stone on its current site.

I had a great pizza in Naples, right by the picturesque bay 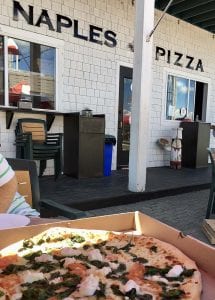 My short respite in Naples, Maine, to enjoy lunch at Naples Pizza, might have been the closest thing to enjoying a town’s namesake that I found. Yes, I picked up my what-turned-out-to-be-a-delicious pizza and carried it to a bench that looked out over the Bay of Naples. That’s what they call that part of Brandy Pond.

Through a tunnel under the road looking to the adjacent Long Lake and the White Mountains, I could see Mt. Washington looming in the distance. OK, it wasn’t Vesuvius and not volcanic, but it is the tallest mountain in the Northeast and can be plenty deadly as different weather patterns collide on its summit. I could see why in its heyday, Naples attracted luminaries. The author of the Scarlet Letter, Nathaniel Hawthorne, and the poet, Henry Wadsworth Longfellow, both toured here.

I thought about taking a spin around Long Lake on the Songo River Queen II, an old-time riverboat complete with paddlewheel that looks like it should be on the Mississippi, but my timing was off. 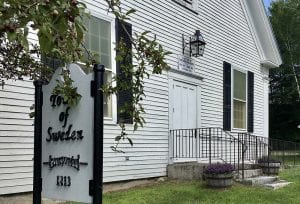 Two places that were similar, something you would never say about the places for which they were named, were Sweden and Paris. Both are on high plains and offer amazing vistas along with classic New England homes.

Sweden has a couple of well preserved extended or connected farmhouses – the “big house, little house, back house, barns” that appear to be only found in New England. And, Paris, while it doesn’t have an Eiffel Tower and is just a village, does have some jaw-droppingly beautiful Federal-style homes. Paris also has the impressive homestead of Hannibal Hamlin, who was a U.S. Senator and vice president to President Lincoln during his first term. Vice-President Hamlin later served as the ambassador to Spain.

Denmark, Mexico, and Peru proved alluring in their own way

Denmark, Maine, is another small village, but it offers canoeing and camping throughout as the Saco River flows through it. Its statue of a Civil War soldier isn’t at all like the Little Mermaid in the harbor at Copenhagen, but it honors the town’s soldiers, especially Civil War General Rufus Ingalls, who made his home there.

Mexico and Peru are near each other – well, in Maine they are – Mexico, Maine, being the busier of the two as it’s across the Androscoggin River from the once very industrialized Rumford, Maine. A plaque outside of the library in Rumford notes the expulsion of the Acadians, a dark historic event. Peru is more rural with many visitors or residents boating, swimming, or just enjoying the waters of its Worthley Pond. 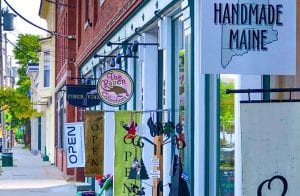 The picturesque, misnamed Norway, Maine, seems to have it all – a nearby lake, distant mountains, local farms, hiking trails, and a busy Main Street with galleries, brewpubs, restaurants, and unique shops. One that was my favorite was the Fiber & Vine, which offered two of my favorite things: wine and knitting supplies — they go together, right?

So, it wasn’t an international trip, but driving to all those internationally named places made me learn much more about my neck of the woods while helping quite a bit with my cabin fever. 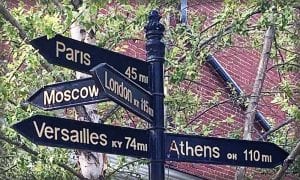 And, Maine has many other towns named for countries or famous cities like Moscow, Lisbon, Rome, and Belfast – so I might have to go further afield to check them out.

In the meantime, you could have a famous city somewhere near you.

According to Google, there are at least 23 towns named Paris in the U.S., 30 named Moscow, 11 named Naples, and seven named Poland. Even when you live in Maysville, Kentucky, right on the Ohio River, Moscow and Paris are “just down the road apiece.”

So, what’s been on your bucket list? You might not have to go as far as you think to visit it. 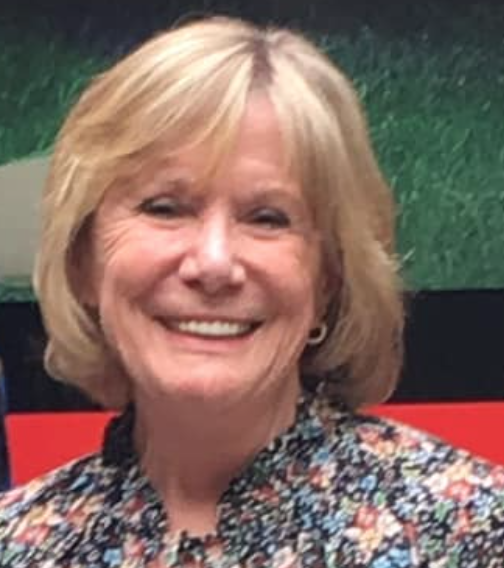 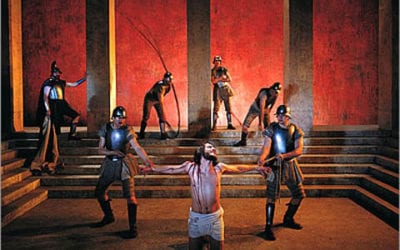 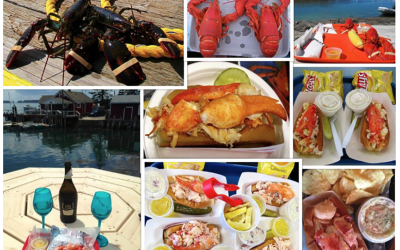 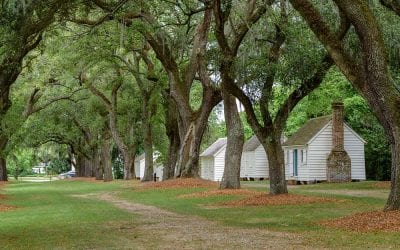