Fabulous DC airport art is tucked away in the damnedest places! 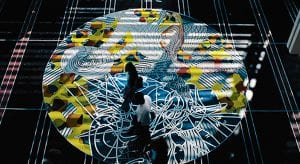 Art is making a comeback in airports and major metropolitan buildings. Washington’s Ronald Reagan National Airport (DCA) is a wonderful example of how airport art can be integrated into the architecture of a massive public structure. Its presence is subtle. Sometimes one has to search for it. But DC airport art soothes the soul of the harried traveler with quiet beauty.

For centuries, imposing edifices seemed to demand beautiful and integrated artwork. The Romans, the Church, medieval monarchs, and early U.S. builders all lavished decoration on their public buildings.

Then, for a short time, function trumped art (think Bauhaus design). Decorative details were deemed superfluous or too costly. Clean spaces and architectural details became an art in themselves. Office buildings and public spaces embraced a utilitarian world of blocks and cubicles. 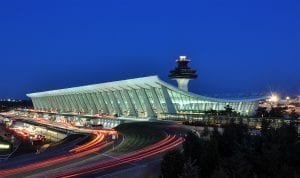 Happily, around 1960, an inspired architect turned his attention to airports, and suddenly the lowly terminal became an art form. The TWA terminal at John F. Kennedy Airport had sweeping curves that seemed to take flight, and the original Dulles Airport building outside Washington, D.C., has a roofline that swoops over acres of glass. Both were Eero Saarinen designs. Thirty-five years later, Fentress Bradburn Architects gave us Denver International Airport, whose wonderful Teflon teepee roof mirrors the rugged Rocky Mountains that rise up behind it.

DCA’s fabulous murals beneath your feet and climbing windows 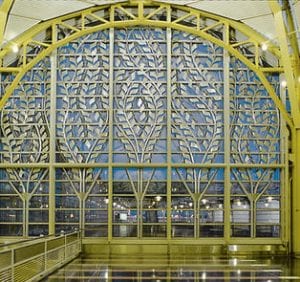 At Reagan National Airport, the most prominent artwork is literally at your feet. Ten giant floor mosaics line the floor of the main concourse of Terminal C beneath a soaring, cathedral-like canopy. “Songs of Morning,” by Gregory Henry, and “Hooloomooloo,” by Frank Stella, all add splashes of color to an often hectic space. They give me pause every time I tread over them.

High above the gate level, colored-glass friezes and sculptures provide more decoration. They also change the color of the space as the sun traces its path across the sky. On the curtain wall of the ticketing level, Kent Bloomer’s “Foliated Trellis” provides the delicate treat of aluminum-and-steel vines creeping up an expanse of windows.

Artwork such as “Chalk Storks,” by Robert Vickery, and “The Rink,” by Bill Jacklin, adorn the walls in tucked-away spaces. And integrated into the railing along the ticketing level rise a series of ceramic panels in both abstract and figural designs. It all creates a warmer DC airport art experience. 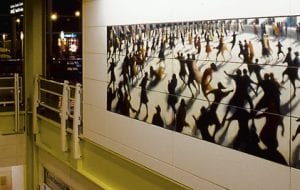 Artwork like this is very welcome in airports. It adds a human dimension to concrete, glass, and steel. After all, airports are more than giant sheds. Their function is more than simply to move people from curbside-to-security-to-gate like so many items on an assembly line. We are humans, not simply cargo. Reducing stress is as important as efficiency.

Art reduces stress admirably. Studies in the psychology of art have shown that color and design have dramatic effects on humans. Art stirs the imagination and also mitigates anxiety. It adds a human element to structure and increases the pleasure of

those using the space.

Every airport has a feeling about it, something intangible. Some airports are necessary evils, dismal way stations to be endured on the way to something else. Others are pleasant places, both interesting and soothing. Many airports are neutral and anonymous. They strive to leave as little imprint as possible on travelers, either positive or negative. Finally, some airports inspire greatness of sorts. They encourage travel and make all things seem possible. Those are the airports I remember fondly.

READ ALSO:
Check out cutting edge street art in the fresh air
Santa Fe sightseeing can be more than the city’s art

Please add any other airports that you feel have wonderful art from their architecture to their interior.

How standardized health credentials can bring back travel and tourism 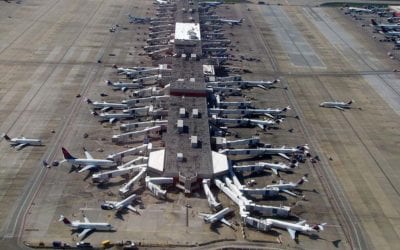 Do we need airport federal funding billions to improve infrastructure?