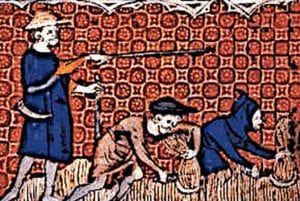 America’s aviation consumer rights litigation is strictly limited in the state and local U.S. court system. Passengers must plead a case to the federal courts, which costs great money. Or, they must petition the lords of the Department of Transportation (DOT) for justice.

Like Medieval serfs, airline passengers have been denied access to the legal system. Their only recourse is to petition through DOT.

Anyone who has been fed up enough with the airlines to take them to court quickly finds themselves bounced out of their local court systems and pushed into the federal courtroom world. Small claims can go out the window, and low-cost remedies also disappear. The airlines play the “Federal preemption of most State law claim” whenever possible. This means that normal safeguards for aviation consumer rights just don’t come into play.

DOT has no published legal rules for consumers to fight airlines

The airlines get to operate outside of the normal rules that every other customer service company faces. They do business free from the Federal Trade Commission (FTC) jurisdiction. In his comments, Kevin Mitchell, Chairman of the Business Travel Coalition (BTC), notes the painful airlines’ consumers rights reality of being caught in a consumer protection “no man’s land.”

First, state laws that make unlawful, unfair or deceptive acts or practices by businesses, such as the state deceptive trade practices laws that apply to other industries, are preempted by federal law and hence have no application to airlines. The U.S. Supreme Court reached that conclusion in the case of Trans World Airlines, Inc. v. Morales more than 20 years ago. Thus, State Attorneys General cannot use their usual powers to police unfair or deceptive acts or practices in the case of airlines while other industries have their behavior checked by these important consumer protection statutes.

Consumers stuck on planes are not considered prisoners

Yet another Supreme Court ruling notes the airlines are only responsible for providing the service they specify in their contract of carriage. All passengers sign this implicit contract when they purchase an airline ticket. Since the airlines don’t specifically say in their contract of carriage that they will provide good customer service or even strive to do that, they are not responsible for more than getting a passenger from Point A to Point B.

By virtue of the U.S. Supreme Court decision in American Airlines, Inc. vs. Wolens in 1995, a passenger lacks the right to sue an airline for breach of contract when an airline has failed to provide decent service — except to the extent that an airline has voluntarily assented to some “self-imposed undertaking.” Anyone who has perused the airline-drafted — and some say imposed — conditions of carriage will know that airlines assume precious little in terms of explicit contractual commitments to passengers.

Air travelers are limited in efforts to get honest advertising.

Under federal law, DOT is the sole guardian of air traveler welfare. The FTC is powerless. When Travelers United approached the FTC, the epicenter of privacy issues in the U.S. government, to discuss privacy, their executives very bluntly told Travelers United that they have no jurisdiction over privacy policies of the airline computer reservation systems nor those travel agents.

Federal preemption has allowed the airlines to get away with treating passengers with less seat room than prisoners being transported to Australia. For years, this has been beyond me. This squeezing of passenger space is resulting in more acts of air rage. The closer one pushes individuals together, the more interactions they have.

We reached this point because airline passengers have no standing in any court. Only the DOT can act against airlines’ unfair or deceptive acts or practices, basically any anti-consumer practice. DOT is the sole creator and enforcer of airline consumers’ rights in the field of air travel. DOT has not prescribed the road rules in terms of consumer protections. Air travel consumers are typically without rights and remedies — like serfs in the Middle Ages.

Travelers United has noted the shameful customer protection loophole exploited by the airlines. It has filed the following comments on past rulemakings and noted:

Aviation consumer rights need to find their way into customer service plans. These plans should be integral parts of airline contracts of carriage that serve customers in the U.S., whether they are domestic carriers or foreign.

DOT should also begin a program to educate travelers about their travel rights. Posters and videos should educate passengers about their compensation rights at luggage carousels. Explain denied boarding compensation clearly near Jetways. Airports should describe the availability of international flight delay compensation under both European Union rules and the Montreal Treaty to passengers.

The current “Customer Service Commitments” should be a part of the contract of carriage. And, when it comes to customer-service failures, passengers should be permitted to take their cases through the normal legal channels. Maintaining the current system where passengers only have the rights of Medieval serfs is not acceptable.