Valencia is a trading city. Founded by the Greeks hundreds of years before Christ, it later served as Rome’s gateway to its Iberian provinces. In the Middle Ages it flourished, first as a Moorish capital (and briefly as El Cid’s citadel), then as a center of the silk trade. Indeed, it was medieval Spain’s most vibrant port, trading silk, oranges, wine, and almonds throughout the Mediterranean and serving as a home port for Spain’s overseas kingdoms in southern Italy. Today Valencia blends a cosmopolitan Mediterranean flavor with a distinctly modern Spanish spirit.
The trace of the old medieval town is a warren of narrow cobblestone streets, which twist and turn tightly within the outline of the old city walls. Courtyards filled with fig trees and spreading palms appear without reason or warning. Wrought-iron balconies overflow with geraniums, and massive, 15-foot-high wooden doors with elegant knockers and hinges punctuate the timeless stone walls.
It is easy to get lost in Valencia’s old town. Take a left, then a right, wander along any crooked path. One wonders whether there was any kind of planning as the once-small village grew into a city. Churches are nestled haphazardly into residential neighborhoods. Old World palaces are hidden behind nondescript walls. Perhaps the intricate network of streets and alleys is left over from the old Moorish medina and bazaar.

One would expect from a glance at a map (and from the stop-and-go taxi ride from the airport) that these cramped alleyways would be choked with traffic. Not so. Much of the old center of Valencia is surprisingly traffic-free; there are pedestrian zones not designated as such on city maps. Restaurants spread their tables outside their doors, and accordion music wafts charmingly between the closely set buildings. What appears on a map to be a boulevard may be filled with flower-filled tables, colorful umbrellas and animated crowds of locals enjoying drinks, tapas or a meal.
Perhaps the most remarkable thing about Valencia is that it has escaped the orbit of American tourism. It still sits relatively undiscovered on the almost tropical Mediterranean coast just three hours east of Madrid and three hours south of Barcelona. Locals boast that it has more sunny days than any other city in Spain — and that’s saying a lot.
Within the old walls of the city, visitors can discover soaring church towers, ornate museums, bustling markets and vestiges of the medieval city’s grand gateways. These recommended sights are all within a 15-minute walk of each other.
The 13th-century cathedral, built on the site of an old mosque, is the most important tourist site in the old town. Its Chapel of the Holy Grail houses what believers claim to be the chalice used by Jesus at the Last Supper. A climb to the top of the cathedral’s octagonal bell tower provides a bird’s-eye view over the red tile roofs of the city. As you look out toward the sea, you also take in Valencia’s modern museum district.
The National Ceramics Museum houses a splendid collection of ceramics and other artwork. Several Picasso ceramics are on display, and one room has been recreated as a Valencian kitchen completely covered in the region’s famous ceramic tiles. Its home, the Palace of Marques de Dos Aguas, built in the 15th century with its alabaster doorway, frescoes, painted ceilings, crystal chandeliers, and marble staircases is so beautiful that it almost outshines the predominantly local collection it houses.

Like all medieval cities, Valencia was once protected by a circle of high walls. Today, all that remains of those walls are two gates: Torres de Serranos and Torres de Quart. Both are fine examples of military architecture from the 14th and 15th centuries. The first was used by the city as a prison for years; the other bears signs of a French cannon attack in the 19th century. Today they are national monuments.
The soul of Valencia can best be discovered in its market, the Old Mercado, the center of Valencia’s commerce for centuries. Here the rich and the poor, the fashionable and the frumpy, all shop side by side inside a huge building that is reminiscent of a railway station but is adorned with ceramics. The market is filled with smells of pungent olives, sweet fruit, fish and dried sausages. A constant clamor fills the air. Children squeal, vendors shout prices, husbands call out to wives, cell phones ring and fishmongers clap their cleavers against cutting boards as they kill their squiggling eels.

Across the street from this cacophony, slender columns rise majestically to a delicately arched ceiling above another market, once a center of the Mediterranean silk trade. The Lonja de la Seda, or Silk Exchange, was built at the end of the 15th century. Here, elegant calm is the rule. The majestic doorways are surrounded by intricate Gothic carvings of surprisingly bawdy scenes. One curious detail is the unique gargoyle on the corner of the building above the patio filled with orange trees. It is of a buxom woman. All the others gargoyles are monsters. Could this be the architect’s wife?
Fifty years ago, in the wake of disastrous flooding, the Turia River was diverted to flow to the south of the city. Since then, the dried riverbed that curves around the old city center has been reclaimed and turned into a park and recreation area.
Across this old riverbed from the Torres de Serranos, the Museum of Fine Arts has a wonderful display of medieval art and one of the best collections of altarpieces in the world. The Institute of Modern Art, built into a corner of the old city walls a short walk from Torres de Quart, presents abstract art of the 20th century as well as a regularly changing exhibition.

Outside the medieval center, Valencia has two major sections of interest to travelers. The first is the ultra-modern Ciudad de las Artes y las Ciencias (City of the Arts and Sciences) designed by Santiago Calatrava. It includes an amazing aquarium where visitors can walk through underwater passages; there is also a futuristic science museum and an eye-shaped auditorium with an Omni theater.
The beach and harbor comprise the third main area of Valencia. This area, which has developed into a separate neighborhood, is now being reclaimed and reconnected with the center of town. The wide, sandy beach fills with locals on the weekends and is packed with restaurants. The port area has been completely redeveloped in preparation for the current America’s Cup sailing races.
Valencia has long been famous for its fruits and cuisine. Valencia oranges are world famous, and paella is synonymous with this city. The oranges can now be found in countries around the world, but for authentic paella, you have to eat here. Even the simplest restaurant manages to serve paella that surpasses anything served elsewhere.
Local friends recommended La Riuà (27 Del Mar, 27; 963-917-172) for traditional Valencian paella prepared with chicken, sausages and rabbit. And crowds spilling into the street led to the discovery of Restaurant Montalbàn (10 Calle Caballeros; 963-924-495) with its wonderful and affordable seafood paella, prepared with clams, mussels, shrimp and fish.

For a delightful — and thankfully affordable — treat when out near the beach and the port, dine at Bodega Casa Montaña (69 Calle Jose Benilliure; 963-672-314). Duck under the bar and sit in a small room at one of a handful of raised tables surrounding by massive wine barrels. Choose from an extended selection of small dishes, each lovingly prepared by chef and owner Emiliano Garcia. Try raw tuna rolled in oil and mustard seed, giant marinated fava beans, delicate fried boquerones, sauteed artichoke hearts and simple calamaris served only with oil and balsamic vinegar. Wash it all down with a light and fruity Rueda white wine, a Navarran Rosado or Rioja crianza vino tinto. And finish with exquisite chocolate desserts by famed chocolatero Paco Torreblanca.
For local information, contact the tourist office at 19 Plaza del la Riena, 963-153-931; or 48 Paz, 963-986-422. Internet: www.comunitatvalenciana.com or www.turisvalencia.es. Or contact the Tourist Office of Spain at www.spain.info.
Photos by Leocha<

Are shrinking airline seats unsafe and unhealthy, too? 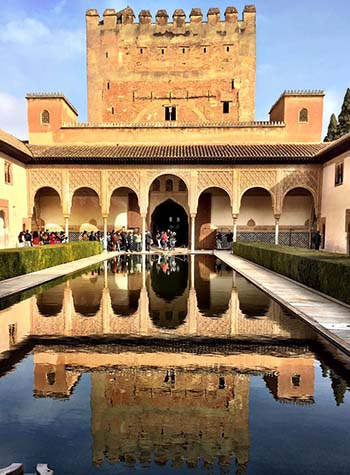