Luggage compensation from airlines for lost, delayed or damaged bags

In Washington, DC, getting laws and rules passed is a Herculean effort. However, getting the word out to consumers about their rights is even harder. Here are luggage compensation rules most passengers don’t know they have when it comes to checked luggage. 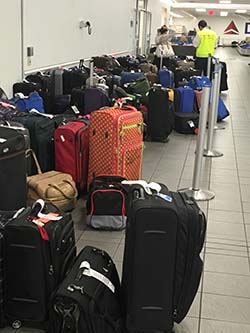 These rights are not highlighted by airlines, because they thrive on their customers not knowing all the rules. Few industries have such complex rules and regulations that are created.

1. $3,500 compensation for damaged, delayed, or lost checked baggage on domestic flights
If a passenger’s checked luggage is lost, delayed, or damaged, airlines are responsible for up to $3,500 in compensation from the airlines. If delayed baggage requires a passenger to purchase or rent items, such as skis or ski boots, or clothing to wear during travels, this falls under this rule. If luggage is damaged, including handles and straps, this rule comes into effect. And, when luggage is lost, the maximum claim that the airlines have to honor is $3,500.

Passengers are responsible for producing a list of items lost, damaged or delayed. And, they should be prepared to have receipts for purchases during their trip in the case of delayed baggage. For compensation of a lost bag, reasonable costs for clothing will be accepted by airlines. One method of dealing with this is to take a picture of the contents of your bag before packing. If receipts for some high-value items are available, so much the better. Also, be prepared to accept the depreciated value of lost items.

Fragile items such as cameras, computers, glassware, jewelry, and so on, can be excluded from the compensation by the airlines on domestic flights.

With proper documentation, most airlines will pay the requested claim up to the compensation level of $3,500. When the luggage is lost, passengers are also due a return of any checked-baggage fees paid to the airline. 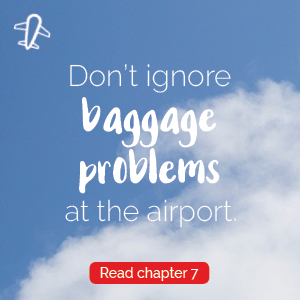 Delayed and damaged baggage is limited to 17 SDRs per kilogram per passenger for checked baggage (about $400 for a 35 lb. bag) and a total of 332 SDRs for unchecked baggage.

3. Read your airline’s rules for reporting lost, damaged, or delayed baggage.
In every case, do not leave the airport prior to reporting the mishandled baggage to the airline. Without your claim tag and a report at the airport, it will be virtually impossible to get compensation for lost luggage or for costs associated with delayed baggage. Damage to contents of your luggage should be reported as soon as it is discovered.

7 things not to wear when flying