How the FAA will integrate rockets, drones, and flying cars into our sky

Established airspace has accommodated space travel for decades. Drones and flying cars, not so long. Joby and SK Telecom announce they will work together to introduce emissions-free aerial ridesharing services in South Korea.

FAA, NASA, and the military have been working for decades on the development of rockets. Big military drones have been used for more than a decade to provide distant firepower for military action. Smaller unmanned aerial systems became prevalent around 2015. Flying cars have been around for decades, but only in cartoons. Today, they really exist.

Travelers United has worked with these new technologies since 2015. Our organization has kept pace with changes in the US space program that now is a major industry. Only 10 years ago, no one would have thought that rockets would take off and land to be reused. Drones were considered flying toys until FedEx, UPS, Amazon, and Google started delivery, surveying, and inspection operations. And the only flying taxis were imaginary. Today, they all exist.

The development of flight can move quickly. Integration of technology takes time, planning, and unified regulation.

The development of flight and space technology has been developing for dozens of years. Now it is racing forward faster than even futurists could have imagined. America’s industry, NASA, and the FAA, working intimately on space operations, drone deployment, and flying car development, discussed a fuller use of our national airspace at recent Air Traffic Control Associations (ATCA) meetings. They are exploring space, integrating drones, and figuring out how to get vTOL (electric vertical take-off and landing) taxis into operation. Within ten years, these new entrants into our national air space (NAS) will fly back and forth to space and provide under-400-foot altitude inspections and delivery systems.

At the last Air Traffic Controllers trade show, discussions about where the unmanned and space programs are going were hot and heavy. For the past six years, they have been dead in the water. Yes, NASA has been working on unmanned air management programs, but the FAA has been doing its best to study unmanned systems to death. Unfortunately, the bureaucracy will hinder the development of unmanned systems and future space operations.

Our skies will host far more than only airplanes. Rockets, drones, and flying cars will also share the wild blue yonder.

Until recently we have not had to share our skies with anything other than commercial and private aviation. Around 200,000 planes are registered, according to Statista. However, millions of UAS and drones need to be integrated into the NAS. Soon there will be more. The FAA has created an air traffic control system that works for commercial and private aviation. However, it does not rapidly serve space development or the increase in low-flying unmanned aerial systems. Technology is not slowing down.

Rockets, drones, and flying cars are growing exponentially. By the end of this decade, more satellites will have been launched by a single US space firm than has been launched in the world since Sputnik. Millions more drones will inspect roofs, telephone lines, cattle fencing, farms, and skyscrapers. Plus, flying cars and taxis may start to fill the air.

Today, the FAA is focused on getting new regulations to allow UAS operations over people. Regulations were in the past designed as almost one-off regs for specific aerial platforms. Today, regulations have to work for millions of operational drones — they are performance-based regulations. Safety information must be shared. Economic barriers to unmanned aviation must be eliminated. NASA has been working on Unmanned Traffic Control that must be created to work together with the manned air traffic control systems that move commercial aviation.

Our US Space Force researchers are already preparing to create regulations allowing Rocket Cargo to take off and land internationally. Col. Horne also noted that good regulation assures for entrepreneurs to dare change. Plus, it provides a framework for increased investments. The maintenance of space platforms and service satellites. Both are only distant thoughts today. 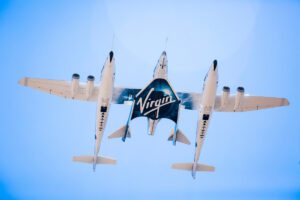 Virgin Spaceship Unity and Virgin Mothership Eve took to the skies on its first captive carry flight on September 8, 2016.

Ten years ago, much of today’s UAS and eVTOL realities were dreams. If we look at pictures of New York City in 1903, the streets were filled with horses. Ten years later, the same streets were filled with cars. Cell phones were adopted by virtually the entire world in 20 years. But it took 120 years for the telephone to penetrate the world before the mobile phone. The DOD, FAA, and private industry are all working to make change more accessible and faster. However, reality is taking over the bureaucracy.

Some technology is not moving as fast as different industries would like. The radio spectrum is limited. That limitation has already caused problems with the command and control of airplanes and 5G telephones. Those issues have slowed the roll-out of major telecom programs. However, the spectrum question may also limit changes to the UAS world.

Unfortunately, the FAA is not organized to deal with the new world of space and UAVs  We will need new specialized organizations.

We will eventually have different organizations dealing with space programs controlling airspace above 50,000 feet. A separate organization will be needed for low-level UAV operations, under 400-500 feet. There will be far more UAVs in the air, which is already overwhelming the FAA’s current control of the business, consumer, and cargo aircraft. It will be difficult enough to manage each level of air/space traffic control, let alone the areas where they intersect.

The message of the recent space and UAV-focused conferences is that cooperation will be needed to move the fast-developing industries that will soon fill our skies. It is required today. Commercial aviation companies like airlines have enjoyed years of operation and an established air traffic control system. However, the world of UAS and drones has been in existence for only about ten years. There are many regulations to be

written and other challenges that must be overcome before the skies and space will truly be open to development. However, that time is near. America must be ready for change. 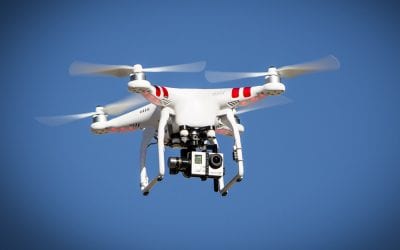