If houses say much about the people who live in them, three homes in the Charlottesville, Virginia area reveal much about three early American presidents. Their occupants were among eight presidents who were born in that state, and helped it earn its nickname as “The mother of presidents.”

Montpelier is an elegant 22-room Georgian-style mansion that was constructed by the father of James Madison around 1760, and was recently restored. Tour guides describe Madison’s prominent place in history, culminating in serving as the fourth president. Going through the building, I found even more meaningful his instrumental role in drafting both the Constitution and its first 10 amendments, and the fact that he authored important documents in the rooms where I was standing.

The Ash Lawn-Highland plantation was home to the fifth president. While serving as secretary of state, James Monroe negotiated the Louisiana Purchase, and the Monroe Doctrine that he established formed the cornerstone of America’s foreign policy for over a century. Visitors are immersed in the atmosphere of a working farm, with demonstrations of spinning, weaving and open-hearth cooking.

Much simpler is a wood-frame cottage which had no stove, well or bathroom facilities. What president other than Theodore Roosevelt would have chosen that setting as a quiet retreat to escape from the pressures of life as the chief executive? Among personal touches at the rustic cabin that visitors see are a chart listing the birds that Roosevelt spotted during his stays there, and letters to his children that he decorated with sketches of cartoon-like figures.

Charlottesville and the surrounding countryside add life and color to important chapters of the nation’s past. It’s also an enclave of arts and culture. A good way to experience all three is to stroll along the Historic Downtown Mall. The brick-paved pedestrian walkway is lined by historic buildings that house shops and restaurants. The street follows a route which during Colonial times was called Three Notch’d Road, named for three nicks that were made in tree trunks to mark its path.

A setting very different from stately homes of former presidents and nearby plantation houses that dot the landscape is tucked into a horseshoe bend of the James River about 20 miles south of Charlottesville. The village of Scottsville (population about 600) was a river port during the 18th century. Flat-bottomed boats transported tobacco, grain and other cargo to Richmond, and returned with goods imported from England and France.

A combination of events, including the advent of railroads, undermined the town’s importance and left it a sleepy shadow of its former self. However, it retains historical touches worth experiencing.

A small museum recounts the story of the town and river. Exhibits in the nearby Canal Basin Square include a packet boat, which over 150 years ago plied the James River, and a list of tariffs charged for transporting cargo and passengers. Among fares were “White person, 12 and older, 1 cent per mile” and “Coloured persons, 5 and up, 1/2 cent a mile.”

No trip to the Charlottesville area would be complete without at least one stop at a winery, and here the influence of Thomas Jefferson is felt – or, rather, tasted. He began planting vineyards close to his beloved estate of Monticello, and dreamed of producing wines equal to those of the Old World. However, a series of misfortunes doomed his effort, and for some 200 years Virginia’s infant wine industry failed to achieve distinction.

That changed recently as a new generation of winemakers began to produce improved vintages. Virginia now has at least 230 wineries and Jefferson would be proud to know that his native state is the fifth largest producer in the country.

Jefferson’s unusual failure as a maker of wine pales in comparison with his many achievements, and those of his famous neighbors, who were among the founders of our country. A visit to Charlottesville brings theirs and other stories to life in a setting as varied as were those early leaders.

Photos by Victor Block except Montpelier by Wikimedia Commons

Planning a stopover on a European trip? Many airline surcharges just jumped 500 percent 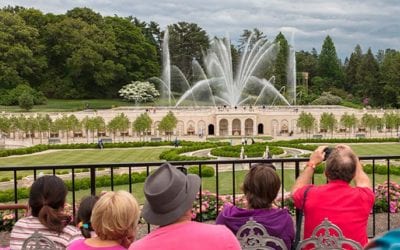 Why conserving flowers and art is so important