The Canadian leaves are getting ready to change for a wonderful Quebec foliage experience. Farms along the roads winding their way north from the U.S. border are bringing in the hay and the last ears of corn are being harvested. Astride the St. Lawrence River, Quebec City’s walled old town is proof that restored reality can sometimes be more wonderful than fairy tales.

Vieux Quebec’s imposing walls, stone houses, boutiques, cafes, restaurants, terraces, and small squares seem to have been created for a movie set. From the towering Hotel Fairmont Frontenac rising above the St. Lawrence, to the narrow, chatchka-lined rue Petit-Champlain and from rue St-Jean’s brand-name stores to the brooding Citadelle standing guard over the city, all surrounded by walls 40 feet high and almost 10 feet thick, this is a city that celebrates and preserves its past.

Quebec City allows visitors arriving by car to combine a picture perfect drive with a postcard-perfect destination. And while spending a few days soaking in the Old World atmosphere of this St. Lawrence port city, there are unique places to see the changing Quebec foliage colors that surround Old Quebec. 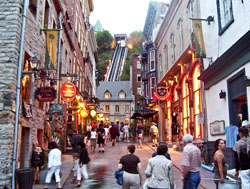 1. Take a ferry ride across the St. Lawrence from the old port, only steps from rue Petite-Champlain, the oldest street in North America. These ferry boats ply the crossing between Quebec City and Lévis that spreads along the river bank opposite Quebec’s old town. The ferry ride costs C$7.20 for a round-trip ticket. If you get off the boat, save your receipt for the return trip. From the middle of the St. Lawrence River, the views back to Old Quebec provide spectacular views of Quebec foliage.

2. The Citadelle and the Plains of Abraham provide a spreading park along the palisades of the city that glows during the Quebec foliage period. It was on these parklands that the British fought the French and wrested control of the city and ultimately Canada from France in 1759. Both generals in this battle — Wolfe, the British commander, and Montcalm, the French leader — died in the fighting that only took minutes to complete. Through a series of lucky events (for the British) the redcoats were able to scale the cliffs of the city by night and attacked the city at dawn, surprising the complacent defenders. 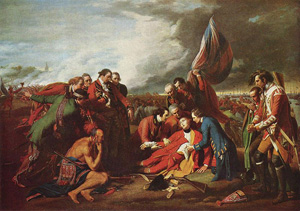 Today, the Citadelle provides plenty of walking paths with wonderful views of Quebec foliage up and down the St. Lawrence. The old fortifications are still an active Canadian military base; however, they can be visited on a one-hour guided tour. In October it is opened from 10 a.m. until 3 p.m. From November to April there are daily tours only at 11:30 a.m.; during the spring and summer the hours are extended. Much of these fortifications were constructed by the British to counter American attacks rather than by the French to protect against the British.

The Plains of Abraham, apart from being the scene of the climactic battle for the city in 1759, is to Quebec what Central Park is to New York and Hyde Park is to London. These grassy knolls and meadows with trees adorned with Quebec foliage and paths lacing their way between the cliffs that fall to the river and the city’s buildings are filled with locals enjoying life. In the winter, cross-country trails loop through the snow and during the summer bikes and in-line skaters share the pathways. 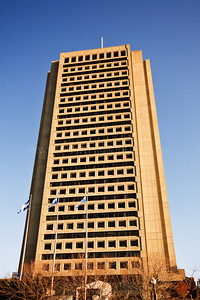 3. The best view of the city and the surrounding Quebec foliage is afforded by the Capital Observatory, 31 floors above the Quebec Parliament at the top of the Marie-Guyart Building (1037 rue de la Chevrotière). I try to take the elevator ride up these 31 floors every time I come to this city. I have seen Quebec blanketed with snow during Winter Carnival, hidden by low clouds during ski trips and with crystal clear clarity in September. The expanse of the St. Lawrence River, with its foliage-covered banks, stretches to the northeast and southwest; the layout of the old city is clearly seen, with the walls linking the Citadelle, Port St. Louis and Port St-Jean. The geometric design of the Citadelle is clear and to the west, some of the old French fortifications can be seen engulfed by modern buildings.

4. Few spots offer the blaze of colors of Quebec foliage as dramatically as the bridge crossing the top of Montmorency Falls. These falls, only 7 miles outside of Quebec City, are almost 100 feet higher than Niagara Falls. However, to be honest, the majesty of Niagra Falls is the breadth of the falls and the volumes of water that crash over the precipice. These falls are far narrower and tamer, but impressive nonetheless, and provide a unique viewing platform from directly above the falls.

The falls are accessible year-round. The foliage panoramas are remarkable from either the bridge over the falls from a cable car that connects the lower parking lot and the upper walkway to the falls. In winter, the frozen falls are a particularly impressive sight, with mountains of ice forming from the spray at the base of the falls, and winter visitors can often see ice climbers climbing the frozen falls. 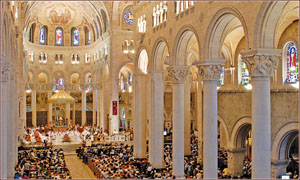 5. If you have a car, be sure to make the three-hour Quebec foliage drive along the St. Lawrence River from Quebec City to Charlevoix. Take route 138 along the river, passing St-Anne-de-Beaupré with its massive cathedral and Le Massiff to Baie St-Paul. From Baie St-Paul, take route 360 that hugs the river bank, for the most part. The leaf-peeping is world-class and the St. Lawrence River provides a stunning backdrop for the colorful Quebec foliage.

Stop in Baie St-Paul to try smoked meat from a tiny counter at Joe’s Deli Bar Smoked Meat on the main street and visit some of the art galleries and perhaps have lunch at Auberge La Pignoronde or La Maison Otis. Charlevoix is home to the palatial Fairmont Manoir Richelieu and a collection of fine lodges and restaurants. It makes an excellent overnight stop as you leave Quebec City or arrive in the region. 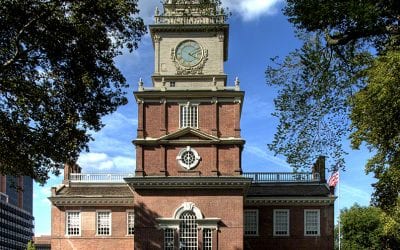 Will Hawaii be the first big US dream destination to reopen?