Sicily is a wonderful blend of the modern and ancient worlds 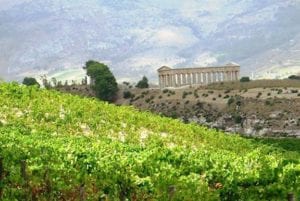 “You can steal my money, but not my food.”  “If lunch or dinner doesn’t have at least five courses, it’s just a snack.”  “If you want things to go exactly as planned, don’t come here.”
These words, spoken by my Overseas Adventure Travel tour guide in Sicily, who actually loves his homeland, tell a lot about Sicily.
Yes, food is important, plentiful and held in a place of near reverence. Plans don’t always work out as they’re intended, and the locals have learned to go with the flow. And residents of the triangular-shaped island just off the toe of Italy’s boot exhibit a warmth, friendliness and self-deprecating humor that make them a reason to visit there.
Others include the vast collection of archaeological and architectural treasures, intriguing chapters of history that await around every corner and examples of Mother Nature’s most magnificent handiworks.
One welcome surprise is how much diversity exists in such a small space. Packed into an area about the size of Maryland, Sicily offers enough variety that some visitors liken it to a mini-continent.
Very mini! It takes only about five hours to drive across the entire island. Yet along the way, travelers encounter much of what makes Sicily a favorite destination by those who have dropped by. 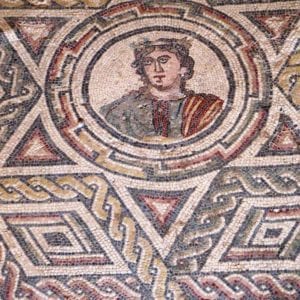 Multiple invaders and settlers came and went, leaving tangible evidence of their visit along with influences on the culture, lifestyle, food and other facets of everyday life.
At the start of my tour, our local OAT guide, Alessio, asked his charges what comes to mind when we think of Sicily. The most frequent replies were archaeology and antiquity, history and culture, natural beauty and – of course – food. Two weeks later we agreed that the island boasts each of these attractions in abundance.
The first impression results from the assortment of architectural riches which serve as reminders of those who came and went. By about 750 B.C. the island was home to three Phoenician and a dozen Greek colonies. Later, much of it fell into Roman hands, and it became Rome’s first province outside of the Italian mainland.
Among those who held temporary sway over Sicily after the collapse of the Roman Empire were the Germanic Vandals and Ostrogoths, Berbers and Arabs, Normans and the Byzantine Empire. Reminders of their stay abound.
The Valley of the Temples is home to the remains of graceful Greek structures that were built between 510 and 430 BC above the ruins of a Roman town. Sprawling across more than 3,200 acres, it’s said to be the largest archaeological site in the world.
The Temple of Concordia is one of the best preserved and is ranked among the most notable remaining examples of Greek civilization. The Temple of Juno was damaged by a fire and restored in Roman times. Also, strewn about the site are sections of defensive walls and gates, and portions of vats where grapes were pressed. 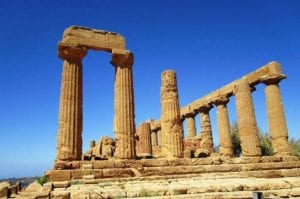 The Villa Romana del Casale near the town of Piazza Armerina is a near-perfect preservation. Constructed in the 4th century AD for an unknown but obviously well-heeled nobleman, the 43-room mansion-like hunting lodge was lavishly decorated with what today are among the finest remaining examples of Roman mosaics in Europe.
The scenes range from Homeric escapades to depictions of daily life. One large scene portrays various areas of the Roman Empire at the time, including a veritable zoo of tigers, lions and other African animals, both real and fanciful.
The most famous attraction in the town of Mazara del Vallo, among a number of them, is the mysterious Greek bronze statue of the Dancing Satyr. In Greek mythology, satyrs were quasi-human figures who were believed to have been lecherous, and this eight-foot-tall sculpture is leaping with abandon as if in a state of ecstasy.
The statue, dated to the 3rd or 2nd century BC, was retrieved in the net of a fishing boat from the sandy sea floor off the coast of Sicily after resting there for millennia. While both arms, one leg and its tail are missing, the head and torso are remarkably well preserved and have a home today in their own museum.
Other cities and towns throughout Sicily have their own unique claims to fame. Many people begin their exploration in Palermo, the capital, largest city and cultural center. At first glance, they may be disappointed, concluding that it lacks the magnificence and allure of other municipalities around the country and the world. However, that judgment would be premature.

Beneath a jumble of rather nondescript buildings waits a wealth of architectural gems, inviting and interesting museums, and other attractions. These include traces of Phoenician walls and gates, and magnificent Romanesque, Gothic and Baroque churches, palaces and other buildings.
The Teatro Massimo (Greatest Theatre), which opened in 1897, is a reminder that hundreds of small opera houses were sprinkled throughout the city until the start of the 20th century. The ornate building is the third largest opera house in Europe, after those in Paris and Vienna.  If it looks familiar to visitors that’s because of its role in the Godfather Part III movie.
Drama of another kind plays out in the three sprawling outdoor fruit, vegetable and fish markets, which are leftover vestiges of 9th-century Arab souks. Crowds of people mill around the stands, as many looking as buying. Vendors alternate entreaties to passers-by to stop and shop with good-natured jibes about their competitors.
Food plays a major role in a visit to Sicily because it plays a big part in the lives of Sicilians.  Mealtimes are not just for eating, they’re as much about a celebration of food.
Given its agriculturally rich land and sunny climate, Sicily served as the granary for the Roman Empire. Its long history of producing a variety of noted cuisines, influenced by those of Greece, Africa, and the Arab world among others, has earned it the nickname of “God’s kitchen.” In this gastronomically rich and diverse setting, every region has its own specialties, which are vociferously touted by those who cook and consume them as il migliore (“the best”). 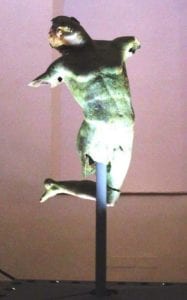 That sense of pride also extends to wine, not surprising given Sicily’s 2500-year past as a center of viniculture. Italy ranks first in the world in the volume of wine produced, and Sicily does its part to contribute to that standing.
Despite its small size, Sicily’s varied landscapes provide a dramatic backdrop for its other attractions. Deep valleys rise up to rocky mountaintops. Fields and rolling hills are blanketed by the silver-green leaves of olive trees, low-lying grape vines, and golden wheat. The 10,922-foot peak of massive Mount Etna, often hidden in clouds, looms over the eastern side of the island. “The Mountain,” as locals refer to it, is the highest active volcano in Europe, although fortunately that usually takes the form of lava flows rather than eruptions.
The natural beauty of Sicily vies for attention with its treasure-trove of man-made architectural gems that span many centuries. The story of the island’s long history is told by its archaeological riches. Against that background, it’s the joy of life, pride for their compact homeland and an intriguing multi-cultural mixture of the people that provide the most lasting memories for visitors.
For more information about Sicily, log onto http://italiantourism.com/sicilia.html. For information about Overseas Adventure Travel tours to Sicily and elsewhere, call (800) 955-1925 or log onto oattravel.com.
Photos by Victor Block 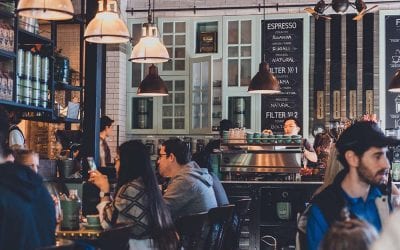