The U.S. Virgin Islands: Sun, Sand, and Savings on Shopping 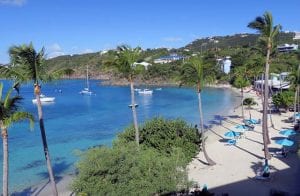 One island in ways resembles a city in the United States with teeming streets and sidewalks and shops galore. Another is a tiny dot of land which consists largely of unspoiled wilderness (see St. John: Little has changed in 50 years, posted on April 6, 2019). The third bridges the gap, with a something-for-everyone variety of ambiance and activities.

Anyone who visits the U.S. Virgin Islands and doesn’t find something – or many things – to like may not be trying. The atolls are so different from each other that they could be oceans apart. Instead, they’re perched in the Caribbean Sea close enough to be easily combined into a single visit.

Sun worshipers, snorkelers and those in search of picture postcard beautiful beaches find a welcome selection on both St. Thomas and St. Croix (rhymes with “boy”). The heart-shape stretch of white sand at Magens Bay on St. Thomas is included on many a “most beautiful beaches” list.

Not to be outdone, the choices on St. Croix include Reef Beach, whose gentle incline appeals to families, and Sandy Point, which is one of the longest stretches of sand in the Caribbean.

The islands also tempt visitors with a lengthy and eclectic menu of other enticing activities. If classes in making baskets, dinnerware and other items out of local materials doesn’t appeal, how about lectures on growing orchids? If discussions of on-going archaeological research sound too serious, you might prefer to check out the popular crab and donkey races.

Another appeal is that as United States territories, the USVI, as they’re known, are easy to get to and around in. U.S. citizens don’t need a passport, the dollar is the currency and English is the local language.

One difference is that people drive on the left side of the roads. That practice was inherited from Denmark, which controlled the islands for nearly 200 years at a time when driving on the left was Danish law.

Before the Danes showed up, Christopher Columbus came upon the islands during his second voyage to the New World in 1493. He called them Las Once Mil Virgines in honor of St. Ursula, a 4th-century Christian martyr.

While Columbus claimed the islands for Spain, that country had little interest in colonizing them and over time control changed hands among the Dutch, British and French. Denmark ultimately achieved ownership and in 1917 sold the islands to the United States for $25 million in gold coin.

By that time the sugar industry, which had brought prosperity to the Virgins for two centuries, had waned. The sugar era reached its peak at the end of the 18th century, at a time when plantations and mills covered much of the land.

Abolition of slavery by the Danish Crown in 1803 was the first of several events which started the decline of the sugar economy. Others included drought, natural disasters, and increasing competition. Today, the brooding stone skeletons of once thriving sugar mills dot the landscape of the islands, and serve as reminders of those once heady days of the past.

St. Thomas — the hub of the American Virgin Islands 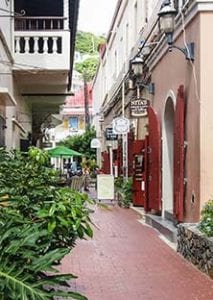 Let’s begin our trip at the most developed island where the majority of visitors begin theirs. St. Thomas is the transportation hub and more commercialized of the Virgins. Large resorts overlook beaches and cruise ships disgorge throngs of passengers, most of whom head for shops in Charlotte Amalie (uh-MAHL-yuh).

The big draws are the variety of items and reasonable, in some cases bargain, prices. U.S. citizens also benefit by being able to bring home up to $1,600 worth of purchases duty-free, double the limit from most destinations around the world.

Many stores sell jewelry, diamonds, watches, and other upscale merchandise, while others offer goods ranging from sunglasses to linen tablecloths to cigars. Some specialize in items endemic to the location.

For example, S.O.S. Antiques sells swords, coins and other artifacts recovered from historic shipwrecks. Eden South offers island-made syrups, jams, and other edibles along with local art, crafts, and textiles.

On St. Thomas, even Mother Nature takes a back seat to shopping. The popular tourist destination called Mountain Top, perched on the highest point of the island, offers stunning panoramic views of other nearby Islands. But most visitors spend much of their time wandering through “the Caribbean’s largest duty-free gift shop” and sampling the highly touted banana daiquiris which are served at the bar.

Yet St. Thomas is more than just a shopper’s paradise. As the largest historical town in the United States, Charlotte Amalie boasts its share of interesting sites. Red-roofed buildings line streets which still are identified by Danish language signs.

ALSO ON TRAVELERS UNITED: Light up your life: Some special ways to enjoy Maine’s lighthouses

According to legend, a watchtower built by the Danes in 1679 was used by the infamous pirate Edward Teach, known as Blackbeard, to spot ships entering the harbor. He also is reputed to have used a Danish fortress, now called Blackbeard’s Castle, to confine his beautiful wife while he was away at sea.

A small Jewish community that developed in Charlotte Amalie constructed a synagogue in 1803, which is the oldest in continuous use in the United States and its territories.

The Frenchtown neighborhood is home to descendants of people who immigrated from the French island of St. Barthelemy in the mid-19th century. Tiny brightly painted houses line winding streets, and fishermen display their daily catch along the waterfront from equally colorful fishing boats. 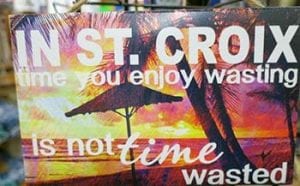 St. Croix — The largest of the American Virgin Islands

St. Croix is the largest of the trio of islands. It provides a comfortable middle ground between the frenzy of shopping, commercialism and noisy nightlife on St. Thomas and the laid-back quiet of St. John. It combines just enough attributes of its sister islands to satisfy most travelers, then adds its own unique flavor.

That flavor includes red-roofed pastel-color buildings in the picture-book harbor town of Christiansted, the old Danish capital, and the meticulously restored waterfront area. It’s home to an early 18th-century Danish fort; the elegant Government House, which served both as the residence of Danish governors and seat of the colonial government, and a former warehouse where slave auctions once were held.

Frederiksted, the only other major town, seems sleepy by comparison. Broad tree-shaded streets are lined by an eclectic mix of architecture. Some Victorian-style buildings, many adorned by fanciful trim, were constructed after the town was destroyed by fire in 1879. Fort Frederik, built 1752-1760, hovers over the harbor.

READ ALSO: Should travelers use biometric data security at the border?

Almost two-thirds of the gentle St. Croix landscape once was covered by sugar cane fields, and the remains of more than 155 mills still dot the island. The Whim estate offers an immersion in life as it was on a sugar plantation. Its sprawling Great House, built in the 1760s, is surrounded by a sugar factory, windmill, cookhouse, rum still and other structures that transport visitors back in time.

Brooding ruins of once-thriving sugar plantations are but one reminder among many of the enticing history that awaits visitors to the U.S. Virgin Islands. Add a long list of other attributes and activities and the result is an inviting destination which combines a familiar setting with Caribbean charm. 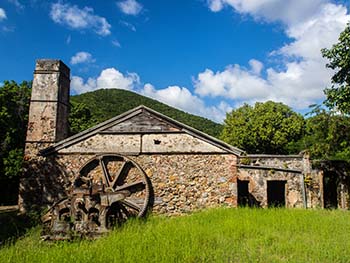 Accommodations on the U.S. Virgin Islands range from luxury to low-priced. At the top end of the scale is The Buccaneer Resort on St. Croix, which is steeped in history.

Remnants of the Manor House, which was built in 1653 as part of a plantation, still are visible. A sugar mill constructed 80 years later now serves as a romantic wedding venue, and lodgings include 250-year-old former slave quarters.

Activities at the extensive property range from snorkeling to salsa lessons and from basketball to tetherball. For more information call (800) 255-3881 or log onto thebuccaneer.com.

Secret Harbour on St. Thomas offers a different, but no less inviting, setting. It’s a beachfront condominium resort overlooking a small bay with apartment-like accommodations and an array of land and water activities.

Swim-out snorkeling from the beach is well suited to beginners and children. For more information call (800) 524-2250 or log onto secretharbourvi.com.

When it comes to dining, you can’t go wrong by following island residents. On St. Thomas they often head for Gladys Café at breakfast and lunchtime. A long list of familiar fare shares menu space with curried, stewed oxtails and other local favorites. For more information call (340) 774-6604 or log onto gladyscafe.com.

Why reservation-only museums are ruining spontaneity