An amazing 5,972 firearms were stopped over the course of 2021, up more than 1,500 from the previous record of 4,432 guns seized in 2019. Passengers should follow the TSA firearms travel rules. As can be seen in the video above, there are specific TSA firearms travel rules for carrying guns. Note, however: Check on state and local gun laws before carrying your weapon by plane across state lines. New York City has exceptionally onerous laws and punishments for gun owners stopped without the proper New York paperwork at TSA security checkpoints. 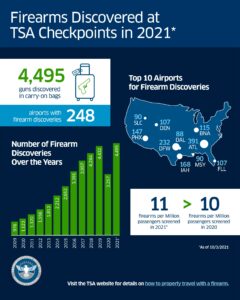 And, if the security studies that showed almost 90 percent of weapons smuggled through security lines were missed, the number of firearms flying in the cabins of America’s airliners comes to about 40,000 a year, or about a hundred a day. Of course, no terrorist “intent” was discovered, but we sure have a lot of the public who “forget” that they have a weapon stashed in their carry-on luggage.

TSA firearms figures showed an increase of 17 percent from firearms discovered at 2016 checkpoints.

It is not against the law to transport firearms when traveling by air. Know TSA firearms travel rules.

There is a collection of specific TSA firearms rules that should be followed. These rules come directly from the TSA Transporting Firearms and Ammunition page.

United States Code, Title 18, Part 1, Chapter 44, firearm definitions includes: any weapon (including a starter gun) which will, or is designed to, or may readily be converted to expel a projectile by the action of an explosive; the frame or receiver of any such weapon; any firearm muffler or firearm silencer; and any destructive device. As defined by 49 CFR 1540.5, a loaded firearm has a live round of ammunition, or any component thereof, in the chamber or cylinder or in a magazine inserted in the firearm.

It is best to not carry any guns or firing equipment into New York City unless the bearer knows the exact laws and has the correct permits for carrying the weapon. The laws are so byzantine that I cannot clarify them here. And, despite doing what the TSA tells you to do, you will be arrested. That normally entails spending the night in jail and paying a fine of around $15,000. Beware.

Below are the top 10 airports where firearms were found by TSA in 2021 and the number loaded with ammunition. 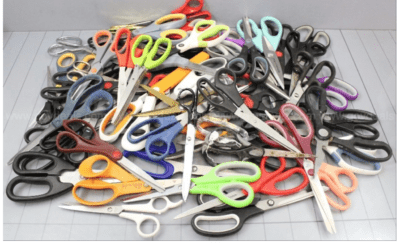 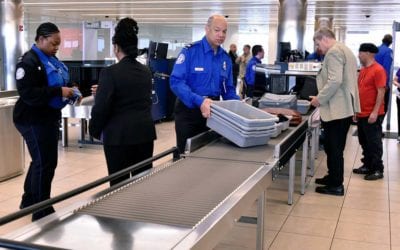 You're vaccinated. You're free to book flights, but beware of TSA airport changes!