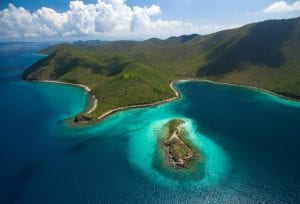 The only restaurant in the only town on the island consisted of three tables on the second-floor porch of a small townhouse. Accommodations were limited to either a luxurious resort or a spartan but beautiful campground. The island’s single road was unpaved and traversable only by 4-wheel-drive jeeps. The rest of the island was undeveloped. That was the St. John I visited 50 years ago.

As the ferry now approached from St. Thomas, I couldn’t help but think, “Oh no, there are so many buildings, so little space.” Dismay and longing set in but I tried to withhold judgment. The island is still two-thirds national park, after all. But yes, Cruz Bay is now a thriving metropolis with multiple hotels, more than a dozen restaurants and a multi-tiered shopping center. I reminded myself there is still no airport, only one elementary school, no high school and although there are now twice as many gas stations, that just makes two. And therein lies the beauty of St. John — and considerable beauty it is — both then and now. 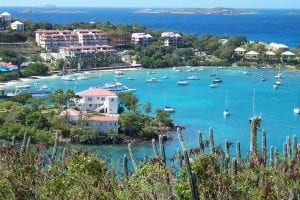 Once out of Cruz Bay, I started to relax, which is not to say that changes haven’t occurred in 50 years. The old donkey trails that then served as roads have since been paved. Still, the twists and turns are as sharp as the roads are steep and the same 4-wheel-drive vehicle is recommended.

Visitor facilities, which fortunately include bathrooms, have been considerably upgraded. Hiking trails — and there are an abundance of them — are better marked than they used to be, though not as free of brush as they may yet be.

The bad news for some is that there are more cars now than horses. The locals view traffic as congested when they don’t know every person coming towards them. The current controversy revolves around whether or not to install the island’s first stoplight. A few more homes dot the mountainside than before but it’s hardly track housing. The increase in drugs and crime no doubt parallels that development everywhere.

The colors of the translucent water reflect every shade of blue found in even the largest box of Crayola crayons. The tourist litany, “I can’t believe the color; it doesn’t look real,” is repeated so often as to become predictable. Small stretches of sea and sand beckon as if they’re your own private beach, with the long stretches of white sand surrounding the island forming a blanket of beaches as inviting as satin sheets and plush pillows at the end of an exhausting day. Parts of the island, despite an occasional $14M vacation home on the horizon, still feel remote, full of windy, narrow roads umbrellaed by mountainous greenery. Signs of 2017’s Hurricane Irma are only noticeable if you know to look for them.

The road along the northern edge of the island strings together one breathtaking vista after another, the views interrupted only by the need to periodically swerve to avoid a distracted donkey or two vying for road space. None of that has changed. And the best news of all? Unlike most other islands, not a single fast-food restaurant has contaminated the local landscape.

ALSO FEATURED IN TRAVELERS UNITED: 12 cruise embarkation secrets for a happy All Aboard

Although much of the unspoiled beauty of St. John promises to resist the ravages of time — and man — several ecological efforts are underway to help nature make good on its promise. Because of its preserved status, St. John has been environmentally correct long before it became trendy to be so. 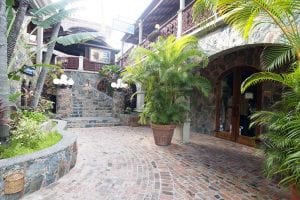 But okay, there IS that shopping center. Mongoose Junction – a huge mini-shopping center that no doubt appeals to some as a stone-stuccoed, multi-tiered, old-fashioned boutique housed in pre-Colonial architecture and garnished with tropical plants. Most people would probably love it. I found it an infringement on my memory of a Cruz Bay that had no shops and only one restaurant. Thank goodness there still is the random rooster casually crossing the street to remind me of those times.

The island has become a working model for ecologists worldwide in the study of tropical ecosystems, soil conservation, coral reef erosions and the preservation of wild and marine life. The presence of recycling bins on otherwise secluded stretches of white-sand beaches underscores this commitment.

You can spend your days snorkeling from one end of the island to the other. Trunk Bay, with its clearly marked underwater trail describing native inhabitants who conveniently swim by as if on cue, is the favored destination of cruise ship field trips — and is viewed by the park service somewhat as a sacrificial lamb. Go elsewhere, where the beaches are a lot less crowded and the marine life is plentiful even if unlabeled. Cinnamon Bay, Haulover Bay, Salt Pond Bay, and Francis Bay, where a colony of sea turtles regularly cavorts, are among the most recommended. 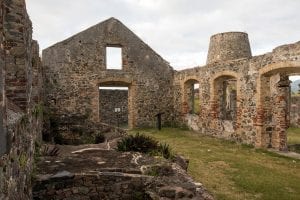 Over 20 miles of hiking trails beg for quiet traversal on foot while more than four dozen beaches beckon sun worshippers and surfers. History buffs can seek out ruins of 18th-century sugar mills while water sports enthusiasts can rent everything from SCUBA equipment to jet skis.

Consider hiring a tour guide knowledgeable in both authentic history and ancient folklore — several hang out at the taxi stand in Cruz Bay — to show you the sights and sounds of St. John. For instance, 33-year resident and guide Kenneth Louis will regale you with tales of island history and culture while pointing out little known nudist beaches along with the more conventional attractions.

Hear about St. John 50 years ago, 25 years ago, and now. Learn firsthand how much has changed — and how much hasn’t. And when you come back to visit 25 years from now — although it’s unlikely you’ll wait that long for a return trip — no doubt much of the island will still be the same. For more information, visit https://www.visitusvi.com/stjohn/homepage.

Mandatory hotel fees — are they a good election issue?