According to legend, the nephew of the owner of St. Francis Inn in the oldest city in the United States fell in love with a servant girl named Lily. They conducted their secret affair by sneaking into vacant guest rooms. They were caught. 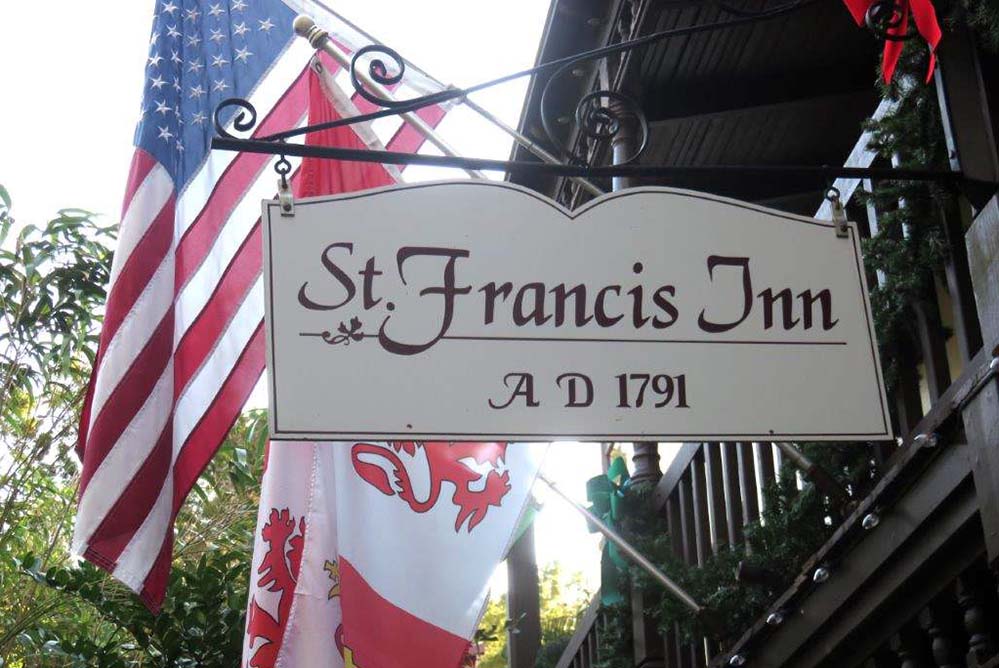 When the uncle unexpectedly walked in on the lovers, he fired the servant and ordered the young man never to see her again. Reportedly, her spirit still haunts the St. Francis Inn.

This “Rooms to Explore” feature focuses on places throughout the country and the world where I have stayed that became part of the experience of visiting a destination. Places that bring to life the local history, culture, and lifestyle in a very meaningful way – where the sightseeing and travel experience begin in the lodging itself. When I’m lucky enough to come across such places, I take pleasure in sharing my fortunate encounter with others. — Victor Block

Distraught over that prospect and unwilling to follow his uncle’s dictate, the nephew is said to have taken his own life. Recently, guests and employees have reported seeing apparitions of a young woman dressed in white both in the room where he died and wandering the hallways, searching in vain for her lost lover.

St. Augustine Florida celebrated its 450th anniversary during 2015, and with such a long history, it’s no surprise that the city has its share of ghosts. The St. Francis Inn, the former home and current haunting place of Lily, shares much of the city’s history.

The inn was constructed in 1791 of native “coquina” limestone, a mixture of compressed sea shells of which a number of original buildings were made. While the structure has been expanded and modified over the centuries, it continues to cling proudly to vestiges of its Spanish Colonial period heritage. In terms of its architecture, history, touches on culture and — yes — ghosts, the property encompasses and represents much of what St. Augustine is all about.

For example, the building was planned in keeping with the goal of the Spanish king at the time to protect his colony from invasion. He ordered that buildings be erected so they could “serve as a defense or fortress against those who might attempt to occupy the town.” Thus, the original structure, which was designed by a military officer to serve as his home, has its back turned to the brick-paved street on which it stands so its front entrance is shielded and protected. 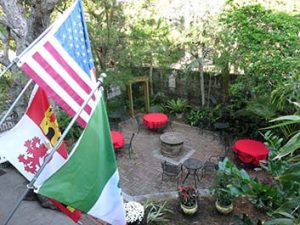 Subsequent owners included other military men, a sea captain, and a plantation owner. It was the daughter of an officer who, after her father’s death, converted the family home into a public lodging.

This colorful past, along with other hints of the story of St. Augustine, echoes throughout nooks and crannies of the building, and in the tranquil ambiance of its enclosed courtyard. That walled setting encloses banana and oak trees, a 100-year-old golden rain tree and lush floral plantings of colorful native flowers and tropical plants.

Great attention has been paid to the status of the inn as a St. Augustine icon, and its inclusion on the National Register of Historic Places. For example, the water that fills a fountain and pond in the courtyard is drawn from an artesian well at the nearby oldest house in Florida, which research indicates was built in the 1720s.

Reminders of the inn’s unique past also abound within its walls. The original plan was based on a trapezoid, with no right angles, and guests still may spot remnants of that quirky layout. 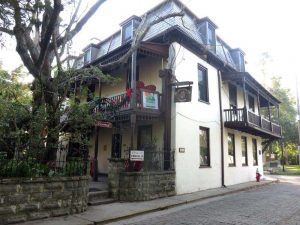 Each of the 17 guest rooms and suites is unique in shape and the antique and reproduction period pieces with which it’s furnished. Every room also contains such throwbacks to the past as the kind of wooden lap desk that was used in the past for writing letters, and which today is more likely to support a computer.

In fulfilling its role as a present day accommodation, the St. Francis Inn also goes out of its way to welcome guests with a wide variety of amenities and services. Several rooms have a fireplace and some include a spacious whirlpool tub. The property has a solar-heated swimming pool and, for guests who prefer a sand beach, the ocean is a short drive away.

The complementary hotel extras are inviting, varied and too long to list in their entirety. They range from breakfast, featuring hot entrees and other St. Francis Inn specialties, to evening wine, beer, and tasty treats; from tickets to some of St. Augustine’s most popular attractions to day passes at a nearby athletic club.

And, then here are those resident ghosts. Paranormal investigations by serious “ghost hunters” (an oxymoron?) have indicated that Lily is not alone, and that several other spirits also inhabit the St. Francis Inn. Fortunately, the entire entourage has been described as friendly, if mischievous.

Whether or not you believe in other-worldly spirits, the St. Francis Inn combines a virtual visit to the past, appealing accommodations and an inviting choice of additional features in an authentic historic setting. Of course, you may have to abide occasional minor inconveniences like rapping sounds in the middle of the night, lights apparently turning on and off by themselves and pictures on a wall moving on their own. For more information, call (800) 824-6062 or log onto stfrancisinn.com.

Travelers use credit card disputes when a refund fails