This “Rooms to Explore” feature focuses upon places throughout the country and the world where I have stayed that became part of the experience of visiting a destination. Places that bring to life the local history, culture and lifestyle in a very meaningful way – where the sightseeing and travel experience begin in the lodging itself. When I’m lucky enough to come across such places, I take pleasure in sharing my fortunate encounter with others. –Victor Block 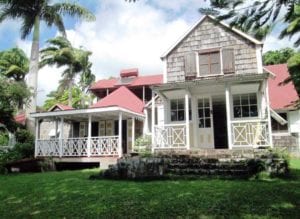 One former Nevis plantation house is nestled on a magnificent Caribbean beach. Guests at another stay in once-dilapidated huts that in the past housed residents of the island. A third shares its setting with a profusion of colorful flowers and plants that would grace a botanical garden, which are interwoven among fields once blanketed by sugar cane and the remains of a 300-year-old mill where the crop was processed.
Visitors to Nevis (pronounced Nee-vis) find unique opportunities to combine history-rich accommodations with a very personal introduction to its colorful past. Despite its miniscule size, less than half as large as Washington, DC, the tiny island provides an immersion in the heady days when growing and processing sugar cane made it one of the richest places on earth. Plus, the

island was spared much of the destruction that plagued other Caribbean islands earlier this year.
The evolution of the sugar-based wealth got its start around 1640. Given the rich Nevis Plantation soil and perfect climate, it didn’t take long for plantations to blanket the island. Cone-shaped stone windmill towers looked out over the landscape and steam-driven crushers extracted juice from the cane which was boiled in large copper pots.
The remains of a number of plantations, and of these reminders of them, still lie half-hidden in the thick forest vegetation, waiting to be discovered by visitors seeking hints of the past. Three others have met a happier fate. Their Great Houses, as Nevis plantation owners’ fine manor homes were called, operate today as inviting inns that provide comfortable accommodations wrapped in an intriguing history lesson.
Nisbet Plantation sprawls over 30 palm tree- covered acres and is the only plantation inn fronted by a beach. A regal, tree-lined Avenue of Palms leads from the Great House, which dates back to 1778, to a stretch of powdery sand fronting the sea.
Accommodations are in 36 lemon-yellow cottages that bear the colorful names of local villages including Morning Star, New River and Cane Garden. While some guests are satisfied spending time in a beachfront hammock soaking up sun and picturing the past, more active types take advantage of the on-site tennis court, fitness center, lap pool and other recreational amenities. A small spa uses products that are created specifically for the resort which contain island-grown ingredients.
For more information log onto www.nisbetplantation.com. 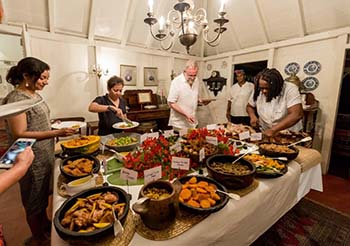 The small wooden houses which were in various states of disrepair before being rescued now grace The Hermitage. It overlooks the sea from its 800-foot-high perch in the shadow of a rain forest-clad mountain.    A sign dates the plantation’s Great House back to 1670, and it’s the oldest wooden home on the island.  However, research has uncovered clues which indicate that its birth actually took place at least 30 years earlier.
The past comes alive in the antique furnishings of the cottages and the colonial furniture in the Great House. The roots of a continuing tradition were planted at the time when the property was a center of sugar cane growing and processing. The plantation owners and their guests would feast on a whole roast pig accompanied by a proliferation of local dishes, and that spectacle and bountiful meal are repeated each week.

The grounds are set off by fruit and palm trees, ginger plants and other vegetation, along with reminders of the plantation’s former life, like old stone walls and a slave privy dating back to the 1740s. Like the other plantation inns, the nods to history are augmented by modern amenities including a swimming pool, tennis court and hiking trails into the jungle. For more information log onto Hermitagenevis.com.
One claim to fame of Montpelier Plantation is that it was the site of the wedding of Horatio Nelson, an admiral in the British navy who achieved decisive victories during the Napoleonic wars, to Frances Nisbet, daughter of the owner of the plantation with the same name. Their wedding took place in 1787 beneath a large tree that still casts its shadow over the lawn. Since then, other members of the British aristocracy, including Princess Diana and Prince Harry, have made this their lodging of choice when visiting the island. 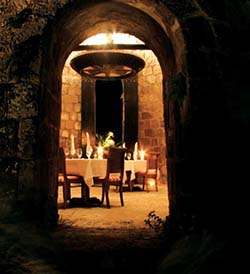 Stone remnants and equipment from the plantation’s sugar heyday are scattered about 60 acres of manicured, beautifully landscaped grounds. The Great Room formerly served as the sugar cane boiling room, and original lithographs which adorn its walls depict the plantation’s appearance then.
The original 300-year-old sugar mill tower today provides the romantic setting for an intimate place to enjoy dinner. Recreational amenities include a spa, swimming pool and tennis court, and free shuttles transport guests to the inn’s private beach a 15-minute drive away. For more information log onto montpeliernevis.com.
Few accommodations anywhere immerse guests in the history of a destination more than the plantation inns on Nevis. A stay at any of them truly is like a walk back in time.