Looking for Maine’s best lobster shacks? Here are my favorites, from Kittery to Eastport. Don’t miss the experience 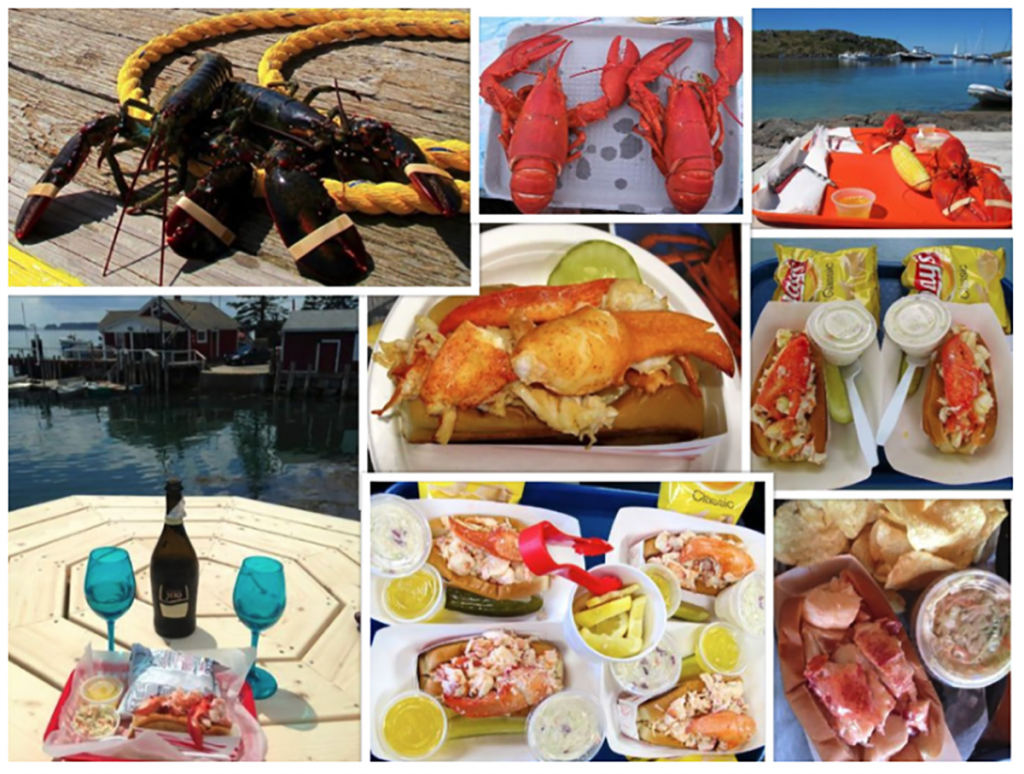 When I eat lobster, I take no prisoners. All that’s identifiable in the carnage left behind are the eyes, antennae, swimmeretes (those feathery appendages on the underside of the body), and dismembered carcass. Finished, I’m literally dripping in lobster juice and goo. The only place for such a messy operation is a classic Maine lobster shack, a sometimes rough-and-tumble operation that’s usually within sight and scent of the ocean.

I’ve dined at lobster shacks from Kittery to Eastport. Some serve only lobster, others a full menu ranging from hot dogs to blueberry pie.

And remember that while lobster prices reflect market conditions, the farther you travel from the trappings of civilization and the deeper you get into bona fide lobstering territory, the fewer frills and the less costly the goods. These are my favorite lobster shacks from south to north.

NOTE: Due to Covid-19, many lobster shacks are doing takeout only. Others have revised their operations and ordering procedures. It’s wise to call for an update before making a trip. 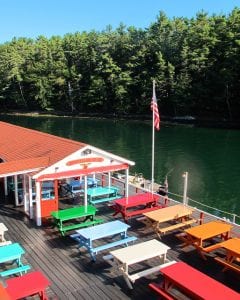 One doesn’t have to venture far over Maine’s southern border to find Chauncey Creek Lobster Pier (16 Chauncey Creek Road, Kittery Point, 207-439-1030). This colorful joint overlooking tidal Chauncey Creek has been satisfying lobster lovers since 1948. Aim to arrive at high tide, when the view is nicer and the pier seems to float on the water. You’ll find outdoor seating on the deck as well as sheltered seating (heated), all at brightly colored picnic tables.

Lobster is the main attraction, but the menu offers choices for landlubbers, including chicken dinners and hot dogs. Also available are mussels, oysters, cherrystones, tuna roll, and even shrimp. Be forewarned: It can be very crowded, parking is a nightmare, and bug spray is a must. 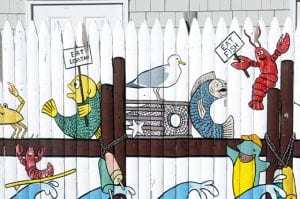 The scenery is top notch at the Cape Pier Chowder House (79 Pier Road, Cape Porpoise, Kennebunkport, 207-967-0123), which tops a pier in a traditional lobstering village. The views (bring binoculars) extend to Goat Island Light House. There’s inside seating, so it’s weatherproof, which gives it a longer season than most. Cape Pier opens in April and goes to November. The menu has a lot more than lobster, and it’s open for breakfast on weekends. 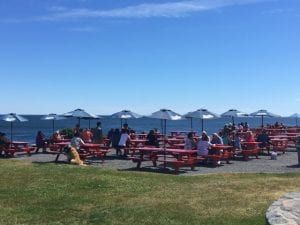 When it comes to views from Maine lobster shacks, it’s hard to beat The Lobster Shack at Two Lights. ©Hilary Nangle

If you’ve had enough of quaint fishing village vistas, head to The Lobster Shack (222 Two Lights Road, Cape Elizabeth, 207-799-1677) for bold ocean views. It has everything: rocky ledges, tide pools, crashing surf, a broad menu, dive-bombing seagulls, and a lighthouse (with foghorn – avoid going on a foggy day or bring earplugs). It’s a classic — in biz since the 1920s — with frills: dining inside and out and a menu that includes sandwiches and fried seafood. 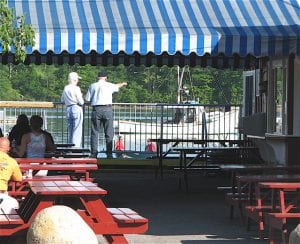 Take a break from power shopping at the original L.L. Bean’s and the other outlets and head to Harraseeket Lunch and Lobster (Main Street, Town Wharf, South Freeport, 207-865-4349), a popular spot on the working harbor.

Not much fussiness here; picnic tables on the pavement and a tiny dining room are the seating options. The menu, however, is pretty extensive for a lobster joint. You can decide for yourself whether fried clams are better battered or breaded. 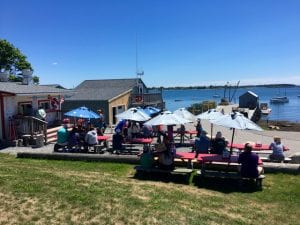 Prices are low, the service is friendly, and views extend over Pott’s Harbor to Casco Bay. Seating is available at picnic tables, mostly outdoors, but a few additional ones are in the lobster shop. Cash only. 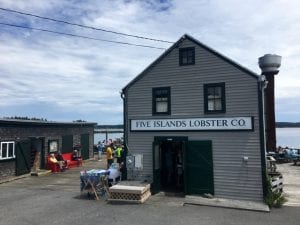 No question: Five Islands, in Georgetown, is one of Maine’s best lobster shacks ©Hilary Nangle

Five Islands (1447 Five Islands Road,Georgetown, 207-371-2990) tops a lot of lists for favorite lobster shack, and for good reasons. For starters, the idyllic setting tips a finger of bridge-connected islands. Sit on the wharf — that’s the only choice — and watch sailboats play hide-and-seek amid the spruce-fringed islands in the harbor and lobster boats chug to and fro pulling traps.

The headliner is lobster, but there are plenty of other options, from chowder and fish ’n’ chips (hand-breaded) to burgers and chicken tenders. It earns points for making its own tartar and mustard dill sauces and cilantro mayo. You get the idea: These folks are passionate about their products.

Round Pond Lobstermen’s Co-op, Round Pond

When given a choice, I opt for simplicity: If the joint does only one thing, there’s a better chance it’s doing it right. Take Round Pond Lobstermen’s Co-op (Round Pond Harbor, Bristol, Pemaquid Peninsula, 207-529-5725), a more-rustic-than-most spot overlooking a picture-postcard harbor. Buddy Poland serves lobster, steamers, corn-on-the-cob, and chips. Period. When he runs low on lobster, he saunters down the dock, climbs into his dingy, putt-putts out to a lobster car — that floating crate where the crustaceans are stored — and brings back reinforcements. 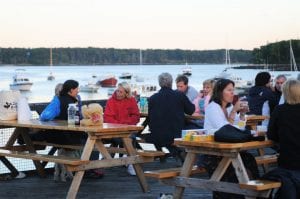 Muscongus Bay Lobster is one of two lobster shacks in Round Pond. ©Hilary Nangle

For those who don’t like lobster, just steps away is Muscongus Bay Lobster (Round Pond Harbor, Bristol, Pemaquid Peninsula, 207-529-2251), a larger and wee bit fancier place with a bigger menu.

I have friends who favor this spot not only because of the expanded choices — lobster and crab rolls, stews and chowders — but also because it offers some sheltered tables, a big plus if the weather looks threatening. It also serves fresh Pemaquid oysters, which gives it points in my book. And it earns extra points for having a touch tank filled with all manner of slimy and spiky sea critters for the kids. 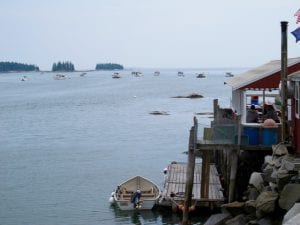 If the line’s too long, or you prefer something a bit more remote, segue over to nearby Miller’s Lobster Pound (Eagle Quarry Road, Spruce Head, 207-594-7406) on quiet Wheeler’s Bay.

Miller’s occupies a working wharf, and if you time it right, you can watch lobster boats unload their catches. The emphasis is on lobster, but Miller’s serves other shellfish, hot dogs, and homemade pies, too. There is some sheltered seating. Beer and wine are served.

MORE GREAT LOBSTER SHACKS — Hilary covers another dozen lobster shacks in her treatise on this subject. Click through to the Maine Travel Maven at https://www.mainetravelmaven.com/maine-travel-mavens-favorite-maine-lobster-shacks/. You’ll find more wonderful shacks in which to crack claws. 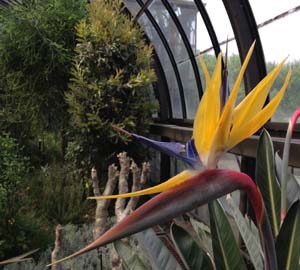