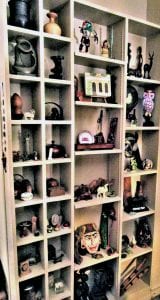 Magical souvenirs — they bring past travels to life

My body is home these days but my mind is roaming the globe. I’m stalking endangered mountain gorillas in Uganda, interacting with animals and people in the Amazon, and clinging to a tiny saddle on a camel strolling through the Sahara Desert. These are among countless memories that remain alive in magical souvenirs brought back from the more than 70 countries I have visited, including ours.

This is a good time to relive travel experiences through mementos you’ve purchased. I have a collection that fills in a large bookcase. It is filled with magical souvenir memories.

Amazonia — recollections of a woven plate

As intriguing to me as the jungles and wildlife of the Amazon region are the people who live in tiny villages strung out along the mighty river. Most villages consist of from several to several dozen houses made of crudely cut wood planks covered by a metal roof. Small gardens provide vegetables and the surrounding forest provides fruits, nuts, and medicinal plants. Most houses rest on rickety stilts that keep them high enough to avoid being inundated during the rainy season, when the rivers can rise as much as 40 or more feet. A few are floating houses that rise and fall with the water.

As the small motorboat in which I rode pulled up to each village, a few people, mostly children, came to the river’s edge to greet us. They were followed by women who shyly offered to sell seed and shell necklaces, woven items, and other handicrafts. Among my purchases was a woven decorative plate which is simple in design but exquisite in workmanship. It is a magical souvenir that reawakens memories of that trip. 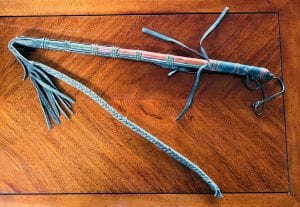 China — A handmade whip that fires my imagination

It’s challenging to choose from among many magical souvenirs I’ve have brought back from “the Middle Kingdom,” as that country was known historically. One stands out. While following the ancient Silk Road years ago, I spotted a man in the distance on horseback. He brandished an interesting, hand-made whip with which he occasionally tapped the animal if it slowed its pace.

New Zealand — Some souvenirs are wonderful memories, like dance

When the first European settlers landed in New Zealand in the early 19th century, it was inhabited by Polynesian people who had arrived there about 800 years earlier. The Maori (pronounced MAH-ree) presently comprise about 15 percent of the country’s population. They have maintained many cultural traditions that may be observed during presentations at the marae (meeting places). These include the recreation of the haka (posture dance). That battlefield ritual includes intimidating tongue and facial gestures. It was performed when members of different tribes met peacefully to indicate a readiness to fight if the other group had a more belligerent goal in mind. It was also performed to welcome distinguished guests and acknowledge great achievements.

Russia — A small knife reminds me of a dramatic border crossing

Going into (what then was ) the Soviet Union on a bus tour from Finland, Russian guards found a small decorative knife I had purchased in Helsinki. I  couldn’t bring it into their country. I guessed they thought I might use it to overthrow the government. The guards told me to leave it at the customs hut on the Finnish side of the border. To do so, I had to walk back through a high, barb-wire-topped double fence and gates.

I walked past snarling guard dogs that could be set free. I was always under the watchful eyes of Soviet guards who kept their rifles trained on me as I made the round trip. When my tour group returned through the same checkpoint days later, I was able to retrieve the memento from the Finnish sentries. As they handed it over, one explained, with a twinkle in his eyes, “The Soviets always do things like that just to hassle Americans.” 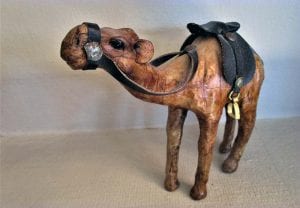 A camel from Tunisia ©Victror Block

Tunisia — A carved camel brings back adventures on the ungainly animal

During my visit to Tunisia, I was able to experience its surprising variety of landscapes. The north is characterized by mountains that give way to its dry central plain, then to a semi-arid region. Much of the extreme south is blanketed by the dry sands of the Sahara Desert, the largest stretch of sand in the world which covers one-fourth of Africa. This enthralling setting is characterized by small settlements clustered around oases. Bedouins ride camels that provide a sense of times past.

My memorable camel ride began with a brief lesson. It included details about how to maintain my mount as the dromedary went through its ungainly exercise of standing. I also got advice about how to overcome any efforts it might make to wander off. The camel, I guess, was prone to head in a direction other than where I, and my fellow riders, wished to go. A carved wooden realistic-looking camel, wearing the traditional saddle, is my magical souvenir. It exhibits the usual rather haughty camel expression and serves as a reminder of that experience. 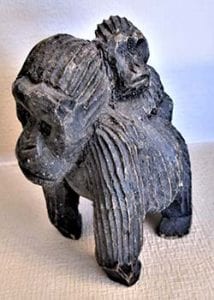 One of my most challenging travel experiences was following the footsteps of endangered mountain gorillas in Uganda. Those majestic beasts live in the aptly named Bwindi Impenetrable Forest. My group was accompanied by guides who had scoped out the location of our prey early that morning. However, after traipsing and climbing for hours through the thick forest, we discovered the uncooperative creatures had moved.

We eventually found them and settled down to watch. Youngsters swung from limbs and wrestled on the ground under the watchful eyes of their mothers. Suddenly, the mammoth silverback who ruled the band began advancing menacingly toward us. One guide waved the AK-47 assault rifle that he carried specifically for that purpose, and the alpha male gorilla retreated. And we hiked back to our tent camp with great memories and photos. 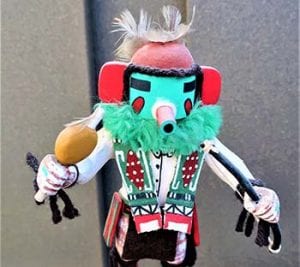 For over 2,000 years, Pueblo people in what now is the Southwest United States have prayed to spirits. They pray for good weather, abundant game, and a bountiful harvest. They have believed that beings known as Kachinas act as messengers between humans and the spirit world. The Hopi people were first to create Kachina dolls, as a way to teach their children about them.

Later, other tribes began making their own Kachina dolls to sell, adding beads, turquoise, and other decorations. I bought a Kachina at an Indian market in Arizona. It reminds me of the rich and complex role of Native Americans in our country’s history and culture.

What cruise changes are coming to the post-COVID world