How to stop seat recliners from invading your space

When seats recline into your space, speak up. No recline in coach needs to be the rule when flying 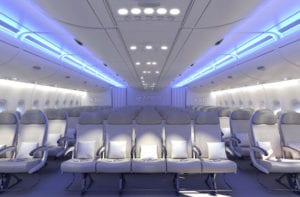 Two domestic airlines already limit your ability to lean back in economy class. Even if the airline doesn’t make the decision for you, it’s the polite thing to do. And, most important, it’s the right thing to do.

“Seat reclining is one of the most irritating, inconvenient, self-indulgent habits,” says Simon Sapper, an organizational consultant and frequent traveler based in London. “Period.”

But click around the internet for a while and you’ll find that this debate is far from settled. Many of the blogosphere’s “experts” believe it’s their God-given right to recline. Ironically, the loudest seat recliners don’t even fly in economy class.

As a public service, stop reclining your seat!

So, as a public service, let’s settle this argument now. Reclining your airline seat is unacceptable because we’re officially out of space. It’s rude – and it’s wrong.

Airlines are trying to squeeze more passengers on a plane to make more money. Before airline deregulation, many economy class seats had a generous 36 inches of “pitch,” a rough measure of legroom. Today, some seats have as little as 28 inches.

If you recline your airplane seat, you’ll probably end up in someone’s lap. Literally.

“I feel most folks would rather sacrifice the 2 inches of reclining backward not to have someone sitting in their lap for the distance of a flight,” says Mary Camillo, a travel advisor from Middletown, New Jersey. “Airlines should instill in passengers what parents have been trying to instill in their children for years. That is, if you do not have enough to share with everyone, then wait until you do.”

Also, airlines should immediately stop using the phrase “Sit back, relax, and enjoy the flight.” That’s an invitation to lean back all the way. But it’s a cruel joke. On two airlines – Delta and Spirit – you can’t fully recline. On other airlines, you’ll invade another passenger’s personal space, which might lead to an unfriendly confrontation.

I have a right to recline my seat.

Another pro-recline argument: If the seat can recline, shouldn’t you be able to?

You can do a lot of things on a plane. For example, you can tell your life story to your seatmate. You can eat a Limburger cheese and Bermuda onion sandwich. You can press the flight attendant call button repeatedly. But all are probably bad ideas.

“Seat recline is a moral issue,” says Jennifer Aspinwall, a frequent air traveler who writes the World On A Whim blog. ”What do you do if the person in front of you reclines all the way? What if you turn around to discover a 6-foot-4 passenger seated behind you? Do you eat your meal in your lap while the tray table cuts into your stomach or do you recline as well and crush the legs of the person behind you?”

Couldn’t have said it better myself. Reclining a seat is wrong.

Airlines should not allow recline in coach — there’s no room.

So if there’s no room to recline your airplane seat, and it’s wrong, why do so many airlines still allow it? Because if they didn’t, it would be an admission that they no longer care about your comfort. Airlines are stacking you into a plane like cargo – no two ways about it.

“I wish all airlines would eliminate the recline function,” says Larry Hickerson, a retired Air Force inspector and million-miler from Peoria, Arizona. “Since airlines went to ridiculously tight pitches, recline sets up an untenable situation.”

Right now, about half the people reading this column probably want to name their firstborn after me. The other half want to kill me. And the airline folks? They’re laughing.

The airline industry loves the seat reclining argument because it divides us. And while we’re arguing about 2 inches of personal space, they’re busy collecting more money from passengers and slowly – ever so slowly – removing even more room. This debate is the perfect distraction.

Whether you think reclining your airline seat is wrong or not, let’s agree on one thing: Greedy airlines got us to this point. Fighting over the scraps of space won’t fix it. If we ever needed thoughtful government regulation, maybe it is now.

READ ALSO IN TRAVELERS UNITED: Airline service suffers — are we getting what we pay for?

Is there a way to deal with a seat recliner?

Reclining your airline seat is still allowed on most domestic flights. Here’s how to deal with someone who leans into your airspace.

Ask them to lean forward. Timing and tone are important here. The moment someone leans back, gently tap the person on the shoulder and politely ask them if it would be possible not to recline their seat. Be. Extra. Nice.

Get a flight attendant involved. Some leaners are clever and wait for you to go to the restroom before leaning. Then they feign sleep, which makes you reluctant to bother them. Oldest trick in the book. You can always ask a flight attendant for help.

Move airplane seats. If you see another open seat in your class of service, feel free to move, as long as the seat belt sign isn’t illuminated. You might also want to ask a flight attendant for permission. As a reminder, the seats in front of the exit row don’t recline. So usually, an exit row seat means you’ll keep your legroom. And maybe, your sanity.