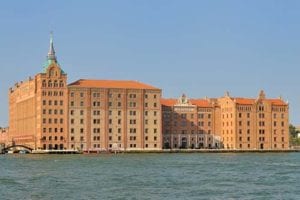 At the end of the Giudecca island Hilton Molino Stucky, a massive brick structure, looking almost Germanic, presides over the wide canal looking north towards the tourist heart of Venice. This giant building was one of Europe’s largest flour mills, then electricity was introduced to Italy, the first Italian elevators began operation and Venice’s largest hotel and convention venue stands.

The brick, neo-Gothic, nine-story high, 13-building complex was constructed at the turn of the 20th century when the Swiss/Italian industrialist Giovanni Stucky sought the perfect situation for his mill that could easily ship the milled flour by sea and receive the grain from Italy’s interior via the inland Veneto canal systems.

The audacity of Giovanni’s vision is evident by the imposing vertical nature of the building itself. The bulky buildings towered over other lower, spread-out warehouses and factories that also occupied Giudecca. Next door, the legendary Fortuny fabric factory spins and still sells expensive bolts of cloth enjoyed by Europe’s upper class. 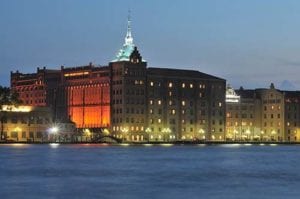 The original vaporetti (Venice’s bus boats) used to be made here. An asphalt factory steamed and distilleries produced many of the whiskys for the grand hotels across the canal. The neighborhood still clearly displays its working class roots. A walk along the Fondamenta San Biago passes a maritime gas station, warehouses, workshops and industrial space.

Being the largest building in Venice wasn’t enough for Giovanni. He eventually grew his business to be Venice’s largest employer. He brought in electricity to power his operation, becoming the first place in Italy to change over to electricity from gas. Eventually, Venice became the first electrified city in Italy by tapping into the system built for this mill. And the tall buildings also demanded an elevator system that became another Veneto first.

After its majestic opening and the first glorious decade of operation, the Molino Stucky began a checkered history. The founder and owner was murdered outside his palazzo in Venice, Palazzo Grassi. Then the mill went through a series of strikes by unions — once, 500 workers demanding more pay and benefits occupied the factory for more than a month. In 1955 the factory permanently closed. 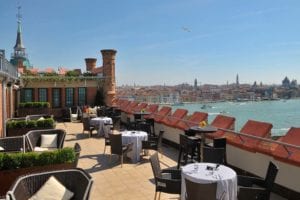 For decades this massive complex of buildings remained a hulking neo-Gothic ruin until the turn of the 21st century, when construction began on the restoration of the mill complex. A partnership between the city of Venice and Hilton Hotels provided the funding to begin restoration and the metamorphosis of the old granary into a deluxe hotel and convention venue. Only a decade ago, the restored building began its second life as an integral part of the city’s tourism infrastructure.

The Hilton Molino Stucky Hotel has been hailed by experts as one of the “most important restorations in the last fifty years.” Within its red brick facades, pointed turrets and characteristic windows, the hotel has 379 comfortable rooms, including 88 executive and 44 suites. Its unique (in Venice) rooftop pool has spectacular views over the island of Giudecca to the east and across the canal to the main city center.

The convention center includes 14 meeting rooms with the most modern technologies. The ballroom can host up to 1,000 participants. The Hilton Molino Stucky is an excellent venue for conferences, congresses and galas — the largest hotel conference space in the city. 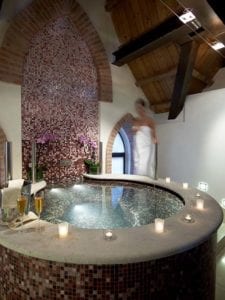 The Hilton Molino Stucky is making new efforts to tie its packages and convention offerings to the local activities and world-class events. They have organized special packages for the Venice Biennale, the film festival and carnival. Each comes with a collection of transportation and entrance guarantees for these popular events.

Visitors and those who are planning to enjoy the bars and dining at the Hilton Molino Stucky can reach the hotel via a special free shuttleboat that leaves from St. Mark’s Square and Zattere twice an hour.

Offering a complete luxury service, the Hilton Molino Stucky claims the largest fitness and spa complex in Venice and an upscale group of bars and restaurants, including the Skyline Bar on the 8th floor, with breathtaking views of Venice and the Lagoon.