Scores of Venice churches are worth a visit. Use the Chorus Pass as a way to visit the city if you stay for a few days. 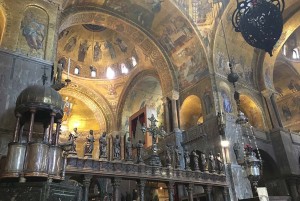 Too many Venice churches – not enough time. While I haven’t actually researched the figures, after more than two weeks in Venice I’d be willing to wager that Venice probably has more churches per square kilometer than any other city in Europe, including Rome. Every nook and cranny seems to have a church. One website lists 131 churches in this city and its islands. And this is after Napoleon in the early 1800s swept through Catholic Venice with a vengeance, shutting down and demolishing around 40 parish churches.

The Venice churches that remained and those that were built following Napoleon’s defeat are spectacular. They range from those influenced by the Byzantine style, covered with sparkling golden mosaics, to soaring Gothic structures with stained glass windows to ornate baroque edifices with stately columns and twisting statues. More than some other cities, virtually every church in historic Venice was built for a purpose and decorated to tell fascinating, heroic stories of the saints, religious orders and noblemen who paid for their construction.

St. Mark’s and San Zanipolo are the major cathedrals and are crowded.

St. Mark’s, the city’s most famous church, was built to house the evangelist’s remains that had been stolen from Egypt. Its interior is spread with spectacular mosaics that tell Bible stories and the story of the removal of St. Mark’s relics from Alexandria, Egypt, to Venice. 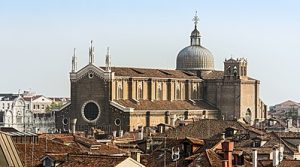 San Zanipolo, the church with the only soaring high-Gothic nave, rose after a Doge dreamt of a flock of doves with crosses on their foreheads. San Trovaso in Dorsoduro was created with two matching entrances, one for each gang in a warring neighborhood. The Church of Santa Maria della Salute was constructed on more than 100,000 wooden pilings to thank the Lord for saving Venice from the plague after two-thirds of the population passed away. And, San Barnaba, pictured above, was built back in 1105, rebuilt in 1350, and extensively renovated in 1776. Today it has been deconsecrated and is used for art and cultural exhibitions.

The legends and stories about Venice churches are fascinating.

Within each church there is a story about their patron saint or angel – some well known, some obscure. These stories are told painting by painting, mosaic by mosaic, and sculpture by sculpture, not unlike today’s comic books tell stories about Spiderman or Superman, frame by frame. I’ve begun to delve into the Internet to research some lesser-known stories so that I can better appreciate the illustrations of the legends splayed across the walls and archways of these holy structures.

Tucked in a corner of Venice behind Campo Santa Margherita are three often-overlooked churches that are crammed with story-telling art. Ironically, the Biblical stories and church legends in these churches are as little known as the churches they fill. Each tells a different story.

The Church of Angelo Rafael is bypassed by most guidebooks with scarcely a mention other than that the well in the adjacent campo was built by Marco Arian, who died of the plague in 1348. He believed that the disease was spread through contaminated water and bequeathed the well to his fellow citizens to help ward off future scourges of Black Death.

But the Church of Angel Rafael is chock-a-block packed with symbolic art that tells the Old Testament story of Angel Rafael from the Book of Tobias. Basically, the elder Tobias, after burying Israelites who had been slain in the first Jewish holocaust, was blinded by bird droppings. He continued to praise God without complaining. Eventually, believing that he would soon die, he sends his son, also named Tobias, to collect debts. His son meets another traveler (Rafael in disguise) who offers his assistance with the journey. Along the way Tobias the son is attacked by a giant fish and kills it with the help of Rafael. The angel suggests that they save the heart, liver and gall bladder of the giant fish. Of course, Tobias the son carefully wraps the entrails of the fish and continues on his journey. 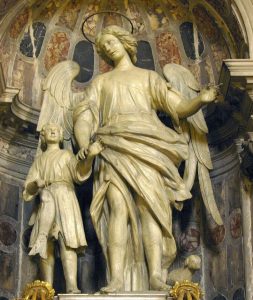 Eventually, they find the debtor, collect all debts and as a bonus Tobias the son falls in love with Sara. However, Sara has a peculiar problem — seven of her previous husbands had been killed by a demon. Low and behold, Rafael has a solution that involves waiting three days to consummate the marriage and then cooking the fish heart and liver. It works and the demon is exorcized. The newlywed couple travel home and Tobias the son anoints the eyes of his father with the fish gallbladder, thus restoring his sight. And they all live happily ever after. The message — God is true to those who are true to him.

The church has a series of paintings that tell the Biblical story and sculptures that commemorate the journey of Angel Rafael, Tobias, and his dog. This story shows that God answers the prayers of Tobias the Elder for his sight and Sara for release from her demons. Along the organ parapet, the basic story is told. It is reinforced by a masterful sculpture set in a chapel and a painting above the altar.

The church also has two versions of massive Last Supper paintings, a soaring painting of the Assumption of the Virgin Mary and a ceiling frescoed with Archangel Michael casting Lucifer out of heaven. 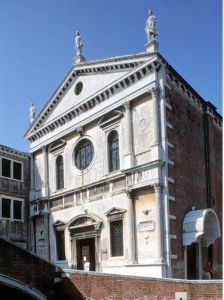 The Church of San Sebastian (Chorus Pass), just across the courtyard, is the masterpiece of Paolo Veronese. His paintings cover the walls and ceiling of this church and the sacristy. Again, every picture tells a story. The story of San Sebastian and his two martyrdoms are told (the first, by arrows, didn’t work). The tale of the coronation of the Virgin is brilliantly illustrated. Finally, the main church ceiling is filled with another Old Testament story — the story of Esther — another tale of Jews being saved from an impending holocaust. Veronese spent almost half his life working in this church. Taking the time to read the story of Esther, how she became the Persian Queen because of her beauty and then saved the Jews by revealing to the King that she was a Jew, brings the spectacular ceiling to life. 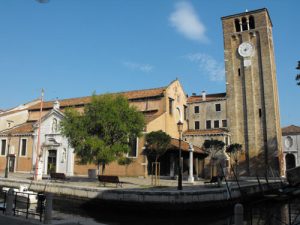 The third church in this tucked-away group is the Church of San Nicolo dei Mendicoli, reputedly built on the site of the second church constructed in Venice. San Nicolo is venerated as the patron saint of sailors and shipbuilders, so it is easy to see his importance to Venice. Incidentally, San Nicolo is also the saint who eventually evolved into Santa Claus.

Inexplicably, the main story told, other than the obligatory story of Jesus, is the legend of Saint Martha. She was the sister of Lazarus and Mary Magdalene. In Bible pages, she was always the perfect hostess, but the myth portrayed in San Nicolo dei Mendicoli is that of post-Jesus Martha taming a fierce dragon in France after traveling from the Holy Lands. Again, the story is painted on the parapet of the organ loft. And a massive sculpture of the gentle saint with the tamed dragon at her feet punctuates the tale.

The saga of Martha has several different endings according to which tale is told. However, I like the version that has Martha taming the wild beast and having it live peacefully with townsfolk. The chronicle of Martha has spilled over from a religious tale and has spawned other similar versions adapted to the secular world such as Beauty and the Beast.

This is only a short look at three out-of-the-way Venetian churches that all have their own lushly illustrated stories waiting to be discovered by anyone with a sense of adventure and the willingness to research a bit of history and lore. These kinds of stories make what could be bland religious art delightfully entertaining.

Back in the Middle Ages and the Renaissance, these stories about the adventures of the saints, the strength of angels and the legends of God were far more than only religion lessons. They recounted the ultimate battle between the good guys and the forces of evil. And just like in cowboy Westerns, the guys with the white hats normally would win.

The Chorus Pass is a valuable entry ticket to 18 wonderful Venice churches.

Entrance fees to Venice churches vary considerably from free to Euros 2.50 for the most part. Whenever you pass an open church on a walk, step into it. You will probably be surprised. In general, except for Chorus Pass churches, hours are anywhere from between 10 a.m. and noon, then again between about 4 and 7:30 p.m.

The Chorus Pass, valid for one year, provides entry to 18 different churches for Euros 12. Part of the benefit of the Chorus Pass is that most of the illumination of the artwork is included in the price and the churches are open Monday to Saturday from 10 a.m. until 5 p.m. (The Basilica dei Frari hours are from 9 a.m. until 6 p.m., except on Sunday when it is open from 1 to 6 p.m.) Each Chorus Pass church has a detailed explanation of the artwork that may be requested from the church ticket office and returned after the visit. The proceeds of Chorus Pass go to the maintenance and restoration of these churches.

Using this Chorus Pass is a wonderful way to visit almost every nook and cranny of Venice. Walking along the canals to find these churches offers a non-touristy view of this city that often seems packed with tourists. However, many of these churches are in parts of the city rarely frequented by tourists. To experience Venice without the crush of tourists, head to The Basilica of San Pietro di Castello, to the church of San Stae (the Vaporetto stops right in front of this church), Church of San Nicolo dei Mendicoli, and the church of San Giobbe — all are outside the main tourist routes.

Churches not included in the Chorus Pass may or may not have an entrance fee; however, some do. When visiting churches in Venice, bring a pocketful of 20 and 50 euro cents coins to activate the church lighting. Sometimes churches sell brochures with details of the sculpture, paintings, and frescos, as well as a small written guided tour. Look for them. The lighting and brochures are normally well worth the small charge. Some of the non-Chorus Pass churches, such as Santa Maria della Salute, may charge to enter the sacristy, where some of the most precious paintings are displayed.

The two largest churches in Venice, St. Mark’s and San Giovanni e Paolo (San Zanipolo in Venetian dialect), are not included in the Chorus Pass and both have different entry systems. St. Mark’s is free, except for three museum areas within the church — the Loggia of the Horses has a great view of the square; the Pala d’Oro is a fascinating gold and jewel-encrusted altar screen; and the Treasury, packed with chalices, candlesticks, and relics. San Zanipolo costs Euros 3.

All photos by Charles Leocha and Karen Cummings unless noted

Is airline codesharing legal fraud? Can Delta really be KLM?