Get out and vote — Today is election day

Turnout counts. The state with the highest turnout of registered voters in the nation was Minnesota. 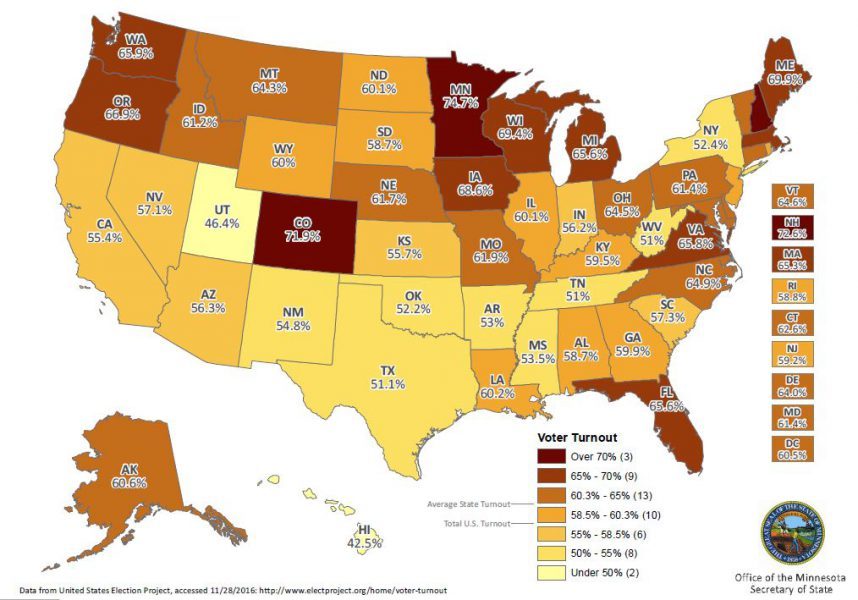 • Women voted at a higher rate than men.
• The older the voter, the higher the turnout rate.
• The unemployed vote less than the employed, and the rich vote more than the poor.
• By race, whites, and African-Americans vote the most.
• Those who are married, or have been, are more likely to vote.
• Most common reason for not voting? “Too busy,” followed by “sick/disabled” and “not interested.”

During the last election when Democratic voters did not turn out in the same numbers that they for Obama in previous elections, they handed the election to Trump. All signs pointed to the collapse of the Republican party because of a renegade candidate and populism gone wild. But, voting matters. Remember that today.

Trump did not win because he was more attractive to this base of white voters. He won because Hillary Clinton was less attractive to the traditional Democratic base of urban, minorities, and more educated voters. This is a profound fact, because Democratic voters were so extraordinarily repelled by Trump that they were supposed to have the extra motivation to turn out. Running against Trump, any Democratic candidate should have ridden a wave of anti-Trump sentiment among these voters. It therefore took a strong distaste for Hillary Clinton among the Democratic base to not only undo this wave, but to lose many additional liberal votes.

The story of Hillary Clinton’s defeat, then, is not the Trump Movement erupting in the ballots, nor the fable that some “Reagan Democrats” flipped again from Obama to Trump. The story is altogether different, and very simple: the Democratic base did not turn out to vote as it did for Obama. Those sure-Democrats who stayed home handed the election to Trump.

Democrats and Republicans are determined to vote in this election. Time will tell. Will the Republicans or the Democrats be more successful in getting out their vote. In a few days we will know for sure, but perhaps sooner.

Voting makes a difference in your everyday life. Do not squander your voice.

Travelers United deals with travel. We advocate for travelers from airlines to trains and from hotels and home-sharing to automobile rentals and travel agents. Every day we see the results of your votes in Congress. We know that the normal citizen does not have the bandwidth to deal with the minutia and complexities of laws and regulations that deal with all aspects of travel. They are working to put food on their families tables, to get kids dressed and off to school, to save for college and more. Our job is to try and keep the world of travel as consumer-friendly as possible. We attempt to keep the government rules and regulations working for travelers.

Travelers United was one leaders in getting the Department of Transportation (DOT) to enforce their own rules that required full refunds of airfares, taxes, and fees whenever an airline canceled their flight or significantly changed your schedule. We encouraged more than 75,000 travelers to file complaints with DOT. And, DOT finally released an Enforcement Memorandum that guarantees you cash refunds, not airline credits.

Our efforts are still a work in progress. Foreign airlines that fall under DOT rules and regulations are still fighting the efforts. Others have gone bankrupt. But all domestic airlines are now following the law and fully refunding the costs of travel whenever the airlines cancel flights.

If you are still having trouble, complain to DOT. Here is the link to the form that will work like magic.

Sign up for our weekly or daily newsletter to learn how Travelers United works every day to help make travel better. But we need you to vote to get the right Senators and Representatives elected who will work for you, not the aviation and travel industry corporate interests.

Can passengers have cruise line safety during the pandemic?

5 travel agent hotel benefits to make for a special staycation