Save money at the markets and beyond with a few simple French phrases. 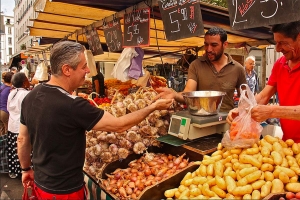 So, you’re feeling like you’ve mastered the “bonjours” and “mercis”? Maybe it’s time to kick it up a notch with some French phrases here and there. Sometimes in Paris, hand signals don’t always work when you are shopping or dining in a café.

We know the feeling when you want to say, “No, stop, please, I didn’t want the €65 box of chocolate,” and sometimes you just can’t find the French phrases.

So here are a few simple French phrases to keep in your back pocket when purchasing items or dining out so that you can avoid spending too much. Bon courage!

Use this one when you don’t see a price or if you’re unsure. This one works wonders at the flea market where, once you know the price, you can see how good your haggling skills are. I just hope your numbers are up to snuff.

You may not actually have to say this out loud, but you should know what it means. You’ll see this one on most receipts as in “Toutes taxes comprises” (TTC) or “service tout compris.” What’s that mean for you? No worries about leaving a centime more!

Use this one if, for example, you are at the wine shop and you want the cheapest wine. It’s a good one to throw on the table when there’s any doubt about pricing. It’s not really sophisticated, but if you’re counting pennies, there’s no shame.

This one’s timeless. Wine or water — you don’t want it too fancy. A “carafe d’eau” is tap water that’s free. A “carafe de vin” is house wine that can be as little as a third the price of a bottle. And, both are perfectly fine, if not delicious.

I use this one at the market when I just want a few cherries, apricots or whatever other seasonal produce is available. Often the market merchants will bag your fruit and veggies for you, meaning you can’t pick your own — after all, they know best.

But I don’t want to ask them for ten cherries or twenty green beans, and I am not always good at guessing how many strawberries are in a kilogram. Just a handful, or a “bonne poignée” for a big handful. Just say “un peu plus” if you want a bit more than they bag.

You’ll hear parents yelling this at their bickering children, but hopefully you won’t encounter a French scolding. Instead, try it at the market, the cheese shop or any store where someone is serving you and doling out or portioning a good. When my market guy is spooning out olives, I say, “Ça suffit, merci” when he’s got enough. It also works on the cheese monger as they slide their knife over a wheel of cheese indicating the size of the slice you want. But really, can you ever have enough cheese?

This is an easy one, and one to avoid — or at least you’ve been warned. You’ll often see it as a “+5” to indicate a supplement of five euros. Often a fixed price menu will have supplements to pay for higher end items, or a taxi will have a supplement to pay for more passengers or baggage. So, don’t be too surprised if the price seems a bit higher than you thought.

Tourists aren’t always aware that many shops like Ladurée will sell you just a few pieces of sweets if you’d like, so there’s no need to get the pricey packaged set if you just wanted a bit of sugar. Whip this one out at the chocolate shop if you just want to try a few ganaches instead of taking home a pricey gift box.

It also works at any macaron shop if you only want one or two to taste (“à gouter” is to taste, in case you’re feeling brave). The shopkeeper will probably ask you how many after you say this, though, so be prepared to hold up some fingers.

This one’s a no-brainer. When you see that something is “gratuit” there is a reasonably good chance that the museum/sample/brochure/tour actually is. Be wary of free things that come with strings (like the “free” tours that almost require a tip at the end). But there are plenty of museums and galleries that are indeed free, and we know a few of them!

This one might get you out of a sticky situation, or may open up the conversation towards a bit of negotiating if you’re at the flea markets. Generally, bartering isn’t something we do in Paris, but you never know. Imagine instead that the market merchant just loaded you up with three kilos of tomatoes — use this phrase to let him know that’s not what you needed.

However, if the cheese monger has already packaged your cheese and you balk at the price, it’s a bit rude to say it’s too expensive and walk away. See #1 and use it liberally.

About the author
Bryan Pirolli — With his college diploma fresh off the press, Bryan Pirolli headed for Paris and four years later he’s still there. A journalist and a tour guide, his main M.O. is pursuing a doctorate degree in communications at the Sorbonne Nouvelle. Bryan regularly travels on a budget, experiencing the best of European culture while still trying to make rent. So far, so good. You can follow his adventures on his blog: www.bryanpirolli.com.

This post was originally published on Travelers United on November 16, 2014.