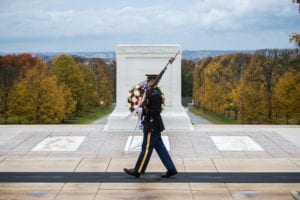 As U.S. Veterans Day is on a Sunday this year, the formal holiday is today. Veterans Day was set as November 11th because World War I ended at the 11th hour of the 11th day of the 11th month of 1918, when Germany signed the Armistice ending the war.

Unlike Memorial Day, which honors those who died while in the military service of the nation, Veterans Day gives each American the opportunity to celebrate the service of all U.S. military veterans who served to ensure our nation’s safety and freedom.

As is my custom on both Veterans Day and Memorial Day, on Sunday, I made my way to Washington Square, Philadelphia, to the “Tomb of the Unknown Revolutionary War Soldier.” There in the shadow of Independence Hall, an eternal flame burns in perpetual vigilance. On the memorial it says,

“Freedom is a light for which many men have died in darkness.”

There are many travel opportunities in the United States to visit and learn about the rich fabric of U.S. military history, by visiting America’s battlefields, military encampments and its military cemeteries where our fallen heroes lay for eternity.

On this Veterans Day, I offer a list of four historic U.S. military sites that I recommend every American visit at some time in their lives.

Arlington National Cemetery and the Tomb of the Unknowns – The Arlington National Cemetery in Arlington, Virginia, just across the Potomac River from Washington, DC, is the United States’ most famous military cemetery. It was established during the American Civil War on the grounds of Arlington House, the former estate of the family of Confederate General Robert E. Lee’s wife, Mary Anna (Custis) Lee, a step-great-granddaughter of George Washington. The 624-acre cemetery is the final resting place of veterans and military casualties from each of the nation’s wars, ranging from the American Civil War through to the military actions in Afghanistan and Iraq.

The Tomb of the Unknowns, a monument dedicated to American service members who have died without their remains being identified, is located within Arlington National Cemetery. It is popularly known as the “Tomb of the Unknown Soldier.”

The Tomb Guards, a special platoon of the 3rd U.S. Infantry Regiment, guard the Tomb 24/7, every day of the year. There is a moving “Changing of the Guard” ceremony conducted at the Tomb every half hour during summer months, and every hour during winter months, during daylight hours. In the evening, the guard is changed every two hours.

USS Arizona Memorial – “Yesterday, December 7, 1941, a date which will live in infamy…,” President Franklin D. Roosevelt’s speech began. The USS Arizona serves as the final resting place for many of the battleship’s 1,177 crew members who lost their lives on that day at Pearl Harbor, Honolulu, Hawaii.

Looking down at the Arizona from the Memorial floating above, oil can still be seen rising from its wreckage to the surface of the water. Some swear you can still smell the battle in that oil as you survey the harbor, where two battleships were lost, six others severely damaged, and more than 3,200 men and women were killed or wounded.

When visiting the Memorial for the first time a few years ago, I was in awe, struck by the eerie quiet among the memorial’s visitors, even children.

Valley Forge National Historical Park – No battle was fought at Valley Forge, but the Continental Army encampment was nonetheless instrumental in the American victory over the British. Valley Forge, just 25 miles from historic Philadelphia, was the site of the 1777-78 winter encampment of the Continental Army, led by General George Washington. The sacrifice and perseverance of the men encamped during that Philadelphia-area winter of alternating freezing and melting snow and ice, which made it impossible to keep dry, brought honor to themselves during the extraordinary birth of the U.S.

When visiting Valley Forge, especially in the cold, damp, overcast days it often suffers in winter, it’s easy to imagine the harsh conditions of the winter of 1777–78; the wind and snow swept fields, and men in cold, dank, often disease-ridden log huts with barely a hint of daylight.

Gettysburg National Military Park – It’s been more than 150 years since U.S. Civil War’s Battle of Gettysburg. The battle was a major turning point of the Civil War. The Union victory at Gettysburg ended General Robert E. Lee’s second and most ambitious invasion of the North in 1863. The battle was the war’s bloodiest, with more than 46,000 casualties, including almost 8,000 killed.

The eerily named Cemetery Ridge, Pickett’s Charge, and Little Round Top, were all added to America’s lexicon during the Battle of Gettysburg. Four months after the battle was ended, President Abraham Lincoln dedicated the Soldiers’ National Cemetery with his historic, famous, Gettysburg Address.

Walking the sprawling fields of the Gettysburg battlefields (located approximately 140 miles west of Philadelphia), you can begin to clearly understand how the three bloodiest days of the Civil War unfolded.

At each one of these historic locations we can learn about some of the most important events in American history while we honor the veterans who fought for us throughout the life of the nation, so we can live in the freedom we enjoy today.

What you need to know when someone dies abroad