Flight-delay companies, like airhelp.com, are offering services for delayed travelers. Are they worth it, or can you do this yourself? 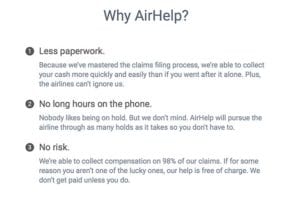 If you’ve experienced flight delays while traveling in Europe, you know the drill: At some point, an airline representative pushes a brochure into your impatient hands that promises compensation under European law.

That’s what happened to Björn Bieneck after he flew from Copenhagen to Dulles International Airport on Scandinavian Airlines recently. The online travel agency he used, Travelocity, even sent him a reminder that the airline owed him money for the four-hour delay and offered him a way to collect “up to $414” through a company called AirHelp. (Travelocity has a business relationship with AirHelp under which compensation claims are referred to AirHelp for mediation.) Little did Bieneck know that he’d stumbled upon an emerging industry that should not have to exist — but does.
“Is AirHelp legitimate?” asked Bieneck, the chief executive of a marketing company in Fredericksburg, Va.

Short answer: Yes, the company is real, but you should think twice before using it. You might be able to file the claim yourself and keep more of your money.

EU 261, the law that allows travelers like Bieneck to collect compensation, was adopted in 2004. The regulation established common rules on compensation and assistance to passengers in the event of denied boarding, flight cancellation or significant flight delays.
The fines, which range from 250 to 600 euros ($261 to $626) per passenger, are meant to discourage airlines from keeping their passengers waiting. They apply to flights within Europe and certain flights operating from Europe.

Airlines are not fans of EU 261 — it’s a pricey rule. A recent estimate by the London office of the law firm Norton Rose Fulbright estimated that airlines pay “well in excess” of $209 million per year in EU 261 claims in Britain alone. The fee is so unpopular that one large European airline, Ryanair, added a $2.60 fee to the cost of its tickets to cover expenses related to EU 261 claims.
The regulation has a few loopholes. For example, it contains no explicit provision for a timely payment of claims. So some airlines have dragged their feet or created administrative obstacles to prevent consumers from filing successful claims, according to travel experts.
Enter the professionals, a collection of small companies that promise to cut through the red tape and secure your refund quickly — for a price. These services charge a contingency fee, payable only when you collect. Because the companies are privately held, it’s difficult to obtain audited financial information from them. AirHelp claims to have processed more than $85 million in total compensation for inconvenienced passengers since it was started in 2013 and helped more than 1.3 million people worldwide.
“The airlines have notoriously made it difficult for people to claim the compensation that they are entitled to,” says Henrik Zillmer, the co-founder and chief executive of AirHelp. “It’s easy to get the upper hand on people who don’t know the law or their rights.”
AirHelp uses a custom database of global flight disruptions to validate claims and then generates and submits claims electronically to make the process as smooth and fast as possible, Zillmer says. It charges a 25 percent commission for airline claims and automatically deducts the fee from the payment its customers receive, forwarding the balance directly to them.
EU 261, the law that allows travelers like Bieneck to collect compensation,
While the process may be quicker, it is at times more convoluted. After Bieneck filed his claim, AirHelp sent him a notice that warned him it could be “two to three months” before he had an answer and that Scandinavian might try to contact him directly or lowball him with an offer of a voucher instead of the cash required by law.
“We kindly ask you to ignore any approaches and forward all correspondence to us,” AirHelp said in the letter.
That kind of email makes passengers like Bieneck suspicious. He should be, says Dan Clarke. As the owner of the British tour operator RealWorld Holidays, he’s involved in hundreds of EU 261 claims a year, often on behalf of large groups.
“In our experience, there is absolutely no need at all to use a third-party company to make your claim,” says Clarke. “The procedure is simple and straightforward, and following a series of court actions, airlines now have almost no get-out clauses.”
None of this should be happening in the first place. The airlines should have come up with a reasonable way to compensate their own passengers without getting governments — or a group of entrepreneurs — involved in a private transaction between a company and its customers.
So how, exactly, do you file an EU 261 claim? It’s simple. British Airways, for example, has step-by-step instructions and an online claim form on its website. And while it’s true that claims normally go off without a hitch, you can run into problems. That’s where having a company like AirHelp can help.
When Dirk Schlenzig flew from Berlin to London on British Airways this summer, an engine failure caused a four-hour delay and created an opportunity to file an EU 261 claim. Schlenzig, who works for a marketing agency in Erfurt, Germany, applied for the 250 euro ($259) compensation to which he was entitled, but the airline ignored him. So he turned to a company called ClaimCompass, which retrieved the money — minus a 25 percent commission — within about a month.

Alexander Sumin, the chief marketing officer at ClaimCompass, says companies like his appeal to the public because seeking compensation is so often characterized by “infinite administrative procedures, long waiting times and poor customer service.” But the real problem, he adds, is that almost no one knows they deserve it.

“Nearly 90 percent of passengers are completely unaware of what exactly they are entitled to,” Sumin says. “Airlines are not obliged to proactively inform them of their rights because of the way the law works; it is the claimant’s responsibility to ask for compensation.”
A similar situation exists in the United States, which has fewer, but equally obscure, regulations regarding passenger compensation. That’s why European companies like ClaimCompass, AirHelp and others are eyeing the vast American market for lost-luggage claims made under the Montreal Convention or for oversold flights under United States law.
Bieneck’s case had a happy ending. Two weeks after he submitted a claim through AirHelp, Scandinavian accepted it and agreed to pay him.

Should travelers focus on one airline for frequent-flier miles? 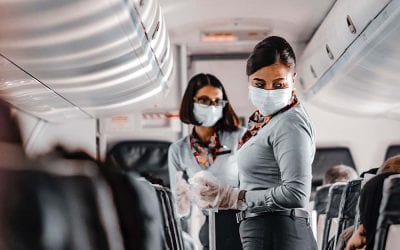