Improving the Department of Transportation (DOT) processes to help passengers is a Travelers United goal. DOT has enhanced its website and provides better customer service information. The mobile-friendly website allows travelers to access the information they need while traveling. And the DOT complaint system works for consumers when there is a rule violation.

Information about compensation and the complaint system is not well-publicized.

For years, Travelers United worked to get proper notification of passenger rights and the DOT complaint system. Unfortunately, today, there is no place where passengers can easily find how to file DOT complaints. Neither is compensation information clearly outlined for passengers. When it comes to lost/damaged/delayed checked baggage or to filing DOT complaints, passengers are on their own. Or, they are at the mercy of the airlines.

The Travelers United efforts focus on putting up posters and videos at airports where passengers encounter their problems. The consumer group also suggests that compensation and DOT complaint information be added to boarding passes. The advocacy group discussed the development of a consumer social media hotline as recently as earlier this month. None of these initiatives figure in DOT’s current plans.

The worst issue is compensation for international flights. DOT does not tell passengers what compensation is available for mishandled checked baggage or for delays. Both are clearly defined in the European Union (EU) rules and in the Montreal Convention treaty that the US signed. Why does DOT keep them secret? A DOT passenger advocate should forcefully push for clear explanations of passenger compensation. They should cover both international and domestic travel and the DOT complaint system.

A short statement on computer-generated itineraries and boarding passes could inform consumers of their rights.

Once, airline tickets were controlled by the International Air Transport Associaton (IATA). The notifications about consumer protections appeared on every ticket. And, when passengers received a ticket at the airport, the passenger protections were printed on the ticket stock. However, all notifications disappear when boarding passes are printed at home or put into mobile phones. It does not have to be this way.

A simple statement on every computer-generated ticket itinerary or boarding pass can provide the basic consumer protections needed for airline transportation. Travelers United suggests this statement:

Service and safety complaints can be filed at https://www.transportation.gov/airconsumer/file-consumer-complaint.
Passengers can get compensation for denied boarding, loss/damage/delay of checked baggage, and international delays under DOT, EU, and Montreal Convention rules.

Must DOT inform passengers of their rights? Consumer groups have taken DOT to court to find out.

DOT does not clearly outline the international rules put in place by the Montreal Convention. It does not provide an overview of the current EU rules that affect flights between the USA and the European Union (EU). The Department does not inform passengers about their rights to about $600 for flight delays of three hours or more when flying from EU to the USA on all flights. And it does not outline that all flights from the USA to the EU have the same compensation rules for European airlines.

Under the Montreal Convention, passenger compensation tops out at about $6,000, depending on circumstances. And, the flight-delay compensation, about $600 (depending on the exchange rate), is virtually automatic. The EU rules apply when flying from Europe to the US on all aircraft and when traveling from the US to Europe on EU carriers.

The DOT complaint system works but can be improved.

Amazingly, DOT encourages passengers to file complaints with airlines. DOT later claims they did not receive enough direct complaints to take rulemaking actions. A basic rule change needed is that airlines share all complaints with DOT. Or, DOT needs to make an effort to collect as many complaints as possible.

DOT’s complaint system, even when used by consumers, is not adequately maintained by DOT — again, according to the GAO Report, pages 29-31. These complaints about the DOT system deal mainly with record-keeping. Without good records, trends and examination of data will not result in examinations of new future consumer protections.

Apple AirTags: Safe in all luggage. Can find missing bags. 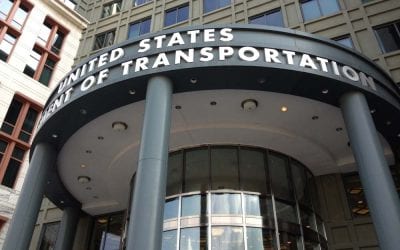