Domestic ID rules are not the same as border protection rules. 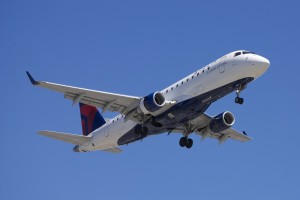 On February 22, 2017, Delta flight 1583 left San Francisco on what passengers thought would be a typical transcontinental flight heading to New York’s John F. Kennedy International Airport (JFK). While aloft, passengers report that it was an ordinary flight, but the same can’t be said for what happened once the plane landed in New York.
A passenger on the flight said that as the plane was taxiing to the gate at JFK, a flight attendant announced that passengers needed to get their identification documents out for inspection. Are there such domestic ID rules?
On the jet-bridge at the plane’s door, each passenger was met by two U.S. Customs and Border Protection (CBP) officers “forcibly checking the ID of every passenger,” according to Britton Taylor, a passenger on the flight. At the time of the ID check, none of the passengers were told why their IDs were being inspected.
According to CBP, U.S. Immigration and Customs Enforcement (ICE) requested their help in locating an individual convicted of domestic assault and other crimes and ordered deported who might have been on Delta flight 1583. It turned out the person they sought was not on the plane.
CBP said their officers “requested” passengers show them their identification when deplaning at JFK. However, frankly, does anyone feel that when federal officers ask to see their ID that it’s a request? In fact, most people aren’t aware that the Supreme Court has ruled that officers can block exits, asking for ID and permission to search people and their belongings without telling them they may refuse.
What are domestic ID rules? Under U.S. law, an ID check is legally considered a “search.”

This action on a U.S. domestic flight follows quickly on the heels of the expansion of CBP’s program of scrutinizing both U.S. visitors’ online activities, as well as their cellphones, tablets and laptop computers as they enter the U.S. Together with CBP’s dramatic extension to U.S. citizens returning home from international travel, which I have been extensively writing about, these actions raise major privacy concerns. At this time, we don’t know if this search of a U.S. domestic flight is a one-time action or a precursor of regular inspections of passengers on U.S. domestic flights.
A major question about this search of passengers on a U.S. domestic flight is, “Was it lawful?” Did either ICE or CBP, who actually conducted the search, have the legal authority to conduct it?
The part of the ICE authorizing statute that has to do with the powers of ICE officers and employees without a warrant is found in 8 U.S.C. § 1357. My reading of the statute is that ICE can search anyone without a warrant if they have reasonable cause to suspect that grounds exist for “denial of admission” to the U.S.
Assuming the alien in question was a male adult, the first question that comes to mind is whether there was any reasonable suspicion to search women and children aboard the flight. More damning for ICE is that this was a domestic flight, meaning any alien on board was already in the U.S.
Under U.S. law, 19 U.S. Code § 1467 CBP is granted the right to search any plane arriving in the U.S. from a foreign nation, including the persons in the plane. CBP regulation 19 CFR 162.6 further defines that CBP agents/officers can search people, baggage, and merchandise arriving in “Customs territory” of the U.S. from a foreign nation.
As the Delta flight from San Francisco to New York City was a U.S. domestic flight, it would appear that CBP had no right to inspect and search passengers for their own needs or for ICE.
I scoured the statutes and regulations governing ICE and CBP for an exception to the quoted statutes and regulation or any laws or regulations which would allow ICE or CBP to make a warrantless search of all passengers on a U.S. domestic flight and found none. I asked an attorney about the search who knew of no exception allowing either of these two federal government agencies to make a sweeping, warrantless search of passengers of a U.S. domestic flight.
Was this a one-time U.S. domestic flight passenger dragnet? So far, there are no reports of passengers of another U.S. domestic flight being so searched by ICE or CBP.
This action by ICE and CBP raises a major question of U.S. citizen liberty versus control by the U.S. government. Right now, I only have more questions. Is this unlawful search by the Trump Administration a harbinger of the future for domestic air travelers? Are the ICE and CBP searches to be a regular extension of the invasion of privacy of U.S. citizens that CBP is currently conducting as U.S. citizens reenter the nation from travel abroad?
These are questions every air traveler — in fact, every American — should be asking their Senators and Congressional representatives.
Related Articles
Why Customs and Border Protection’s ID Search of a Domestic Flight Is on Weak Legal Ground from The Atlantic, March 8, 2017