A Danube River cities tour by riverboat is a dream vacation

“Now we’re heading toward Durnstein, one of the loveliest towns in Austria,” the ship’s loudspeaker intoned. “So many artists have portrayed the beautiful setting that it came to be called the Painters’ Corner.”

The fact is, though, that on the way to Durnstein our vessel sailed past lovely town after lovely town.  My wife Fyllis and I joined other passengers in oohing and aahing over their beauty, and that of tiny villages that also hugged the river banks.  We spotted steepled churches, turreted castles, and other historic landmarks, and marveled at the scenery that made us wish that we had the talent to capture on canvas what we were seeing along the shoreline.

It was just another day admiring majestic cities and tiny hamlets along the banks of the Danube River as it flows through the Czech Republic, Austria, Slovakia, and Hungary.

Cruising by Prague, Vienna, and Budapest

Our Grand Circle Cruise Line trip took us to Prague, Vienna, and Budapest, three of the most magnificent cities in Europe, and little Bratislava, the capital of Slovakia. Their architectural riches and intriguing histories place them high on many travelers’ must-see list.

For starters, each is an architectural showcase that spans centuries and styles.  Many a beautiful palace, castle or cathedral, if located elsewhere, would be considered a cherished gem. Here it’s just another example of some of mankind’s most creative accomplishments. 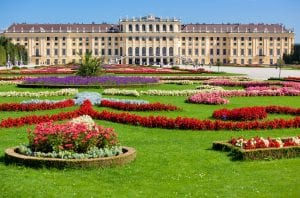 The settings double as outdoor art and sculpture museums. Spires of structures pierce the skyline. A museum-quality selection of statues, frescoes and other adornments adds to the scene.

Even in settings of such stunning architecture, spanning multiple centuries, some treasures stand out. The Schonbrunn Palace in Vienna was built between 1696 and 1712 at the direction of Emperor Leopold I for his son, Joseph I. The goal was to have the 1,441-room edifice equal the splendor of Versailles in Paris.

Prague Castle is the largest in Europe 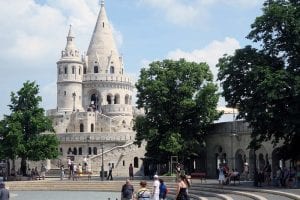 Prague Castle, built more than 1,000 years ago, is the largest in Europe. The castle complex stretches over 18 acres and encompasses chapels, galleries, and other buildings, along with lovely gardens.

The Bratislava Castle was erected in 1430 at the place where a fortification had stood since at least 800 AD. The white fortress-like structure, set off by a stocky tower at each corner, resembles a storybook castle. It houses a museum that traces the history of the area from the Middle Ages to the present.

All four of the capital cities that we visited boast of world-class art museums. Collections include masterpieces by some of the most renowned painters and sculptors from various eras.

ALSO IN TRAVELERS UNITED: Power in the Pyrenees — royalty, monks, and magic

Other exhibits in those cities and elsewhere offer a varied selection of intriguing topics. For example, separate displays in the Czech Republic town of Cesky Krumlov trace the horrid history of torture, and introduce visitors to the magic of marionettes and puppetry. 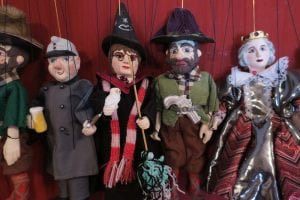 An equally light-hearted museum in Krems, Austria, features caricatures and cartoon drawings, while among more than 100 galleries in Budapest, Hungary, are those devoted to pinball machines and miniature bottles.

Along with excursions to such typical visitor attractions in port cities where our ship docked, and transportation to others just outside them, one of our most enjoyable and memorable experiences was a home-hosted dinner in Bratislava. That provided an opportunity to get a basic education in many things Slovakian, while the family members with whom we dined had a 101-course in our lives.

During the ride to our destination, before splitting into small groups assigned to different families, our Program Director — as Grand Circle identifies its tour guides, who are much more than that term might suggest — encouraged us not to be shy about asking questions of our hosts. And we took him at his word.

Learning about locals through conversations

We engaged in a discussion of politics in their country and ours, compared the education systems and asked and answered questions about our respective situations regarding immigrants.

At their invitation we strolled through the lavish garden growing in the back yard, picked and sampled some of the vegetables and then enjoyed a dinner entrée of chickens which, we learned to our dismay, had been scampering around the fenced yard earlier that day. The lucky rabbits which shared the compound had escaped that fate – at least for the time being.

That very personal interaction with a local family contrasted with our visits to monumental cathedrals and other famous landmarks. Both kinds of experience added to our knowledge and enjoyment.

So, too, did the time we spent aboard the ship – part of the package which left us eager to plan our next river cruise.

Among cruises that Grand Circle offers are five that ply the Danube River. Prices begin at $2,195, including international air fare, all onboard meals with beverages, guided tours with headsets in every port, the use of e-bikes, gratuities for local guides and drivers and a number of other amenities.  For more information call (800) 221-2610 or log onto gct.com.