Traveling across the USA by car may be daunting, but there are plenty of American drives nearby as well 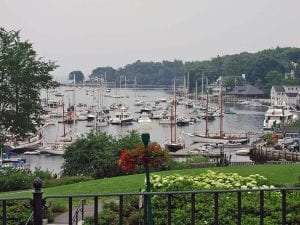 Granted, right now you can’t take cross-country American drives your family may have been planning. So, instead, head for a scenic road that meanders through several states, stopping at attractions along the way.

Even so, that doesn’t mean you need to stay at home and forego outings by car. These outings can provide a respite from the lock-down that impacts the entire country. Scenic drives that until recently attracted people from every state TO every state still exist and some probably are close to where you live.

From Maine to California, Florida to Washington State, opportunities to get outside and admire some of Mother Nature’s magnificent handiworks await. Here’s a small sampling of driving trips that, while short in time and distance, are long in appeal. They are also a ride through history.

Rolling along Maine’s rocky seashore or through central Florida

Maine has nearly 3,500 miles of coastline, and U.S. Route 1 provides views of most of it. As the road meanders along, it passes rocky shoreline, fishing villages, historic homes, and ships anchored in protected harbors.

Not surprisingly, the setting is very different in Florida. Many locals tout the 60-mile stretch of Route 17 between Sebring and Loughman as among the best, which is why it’s known as “The Scenic Highway.”  As it traverses the central portion of the state, the road passes historic communities, citrus fields, and sparkling lakes. It provides a reminder of what Florida was like in the early 1900s.

READ ALSO ON TRAVELERS UNITED:
Want to travel after coronavirus lockdowns? Everyone does!
Why virtual travel can help you make future trips better 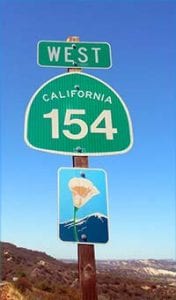 Leap-frogging to the West Coast, California lives up to its nickname as “the Golden State” with its wealth of inviting drives. Some are well-known routes that offer dramatic ocean views, others head inland past rolling vineyards and other attractions.

California State Route 154 is a backroad between Los Olivos and Santa Barbara. It passes through the Los Padres National Forest and San Marcos Pass in the mountains, reaching Lake Cachuma. It then crosses the Cold Spring Canyon Arch Bridge which, at 400 feet above the canyon floor, is one of the highest spans in the United States. This road is designated as a “Scenic Highway” which traverses “memorable landscape.”

Spectacular nature and classic towns in the Northwest, the Southwest, and Colorado 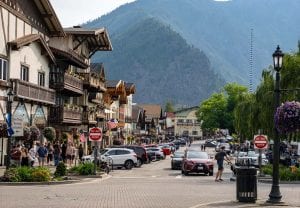 The fourth corner of the country also has roads to rave about. The Stevens Pass Scenic Byway stretches 69 miles from colorfully named Gold Bar to Leavenworth, Washington, a Bavarian village with traditional European architecture. The road traverses the rugged Cascade Mountains, offers views of jagged peaks, rivers, and glacial lakes, and leads to the ski resort, and former railroad town, of Stevens Pass, perched at an elevation over 4,000 feet.

Mountains also comprise part of Oak Creek Canyon Drive (U.S. 89A), which passes through Sedona Canyon and on toward Phoenix. The big attraction is desert terrain and the famous “red rocks” that paint the canyon.  Sunset-colored buttes, haunting desert vistas, and tiny towns add to the something-for-everyone variety of this road trip.

One of the most scenic and mightiest mountain routes is the Million Dollar Highway (U.S. Route 550) in the southwestern part of Colorado. That 82-mile-long, roller-coaster ride is one of the highest roads in the country, soaring into the San Juan Mountains, then diving into deep, sun-drenched valleys. Fields of wildflowers and sightings of elk add to the enjoyment.

Drive along some of America’s historic trails

Some driving trips follow trails that wander through multiple states which, until recently, some people followed in their entirety. It’s still possible to take a day trip along part of those routes to enjoy what they offer. 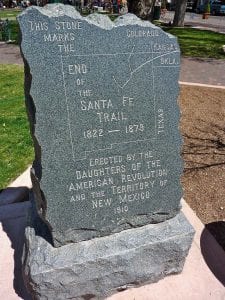 After the Lewis and Clark expedition (1804-1806) traveled to, and through, the Oregon Territory, pioneers, farmers, hunters, and others followed in their footsteps. The 2,000-mile-long route they took became known as the Oregon Trail and was the most heavily used path in the westward expansion. Sections of the trail, which begins in Missouri, offer day trips by car instead of horse or covered wagon. The Santa Fe Trail also began in Missouri and covered 800 miles on its way to New Mexico, following the Arkansas River and crossing Indian territory.

Native Americans also played a part in the history of the military road that was built to connect a string of forts between Kansas and Oklahoma. They were among prairie garrisons tasked with protecting western settlements. While that road no longer exists, U.S. 69 and other thoroughfares are designated as the Frontier Military Scenic Byway. It leads to two of the remaining historic forts in Kansas. 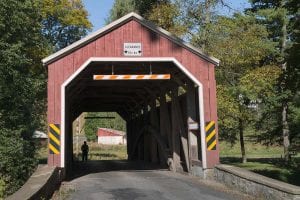 People with a special interest also may find American drives that focus upon your favorite interest. Take covered bridges! These charming reminders of years, and centuries, gone by often are associated with states along the Eastern Seaboard, and with good reason.

Of the approximately 14,000 such structures that were built in the United States, most between 1825 and 1875, fewer than 1,000 survive, and most of them are east of the Mississippi River. Vermont is a treasure-trove for lovers of this page from history, with more than 100 covered bridges.

In Pennsylvania, there are 23 covered bridges in Washington County, 14 in Bedford County, 11 in Bucks County, and others scattered throughout the state.

They don’t have to travel to enjoy viewing one example of a historic American icon. Other folks throughout the country also may be able to enjoy one or more covered bridges, magnificent scenery, and other delights for the eyes within a short drive from where they live.