Learning about ridin’ and ropin’ at the Arizona Cowboy College

Becoming Cowboys for a day in Arizona 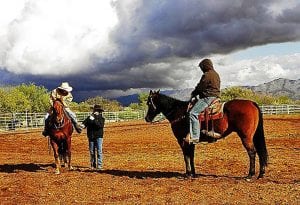 Heels down. Toes out. Squeeze with calves, not knees. Lighten up on the reins. Sink your butt into the saddle. So began my first riding lesson at the Arizona Cowboy College in Scottsdale, which was followed by instructions in grooming, shoeing, advanced riding techniques, and roping. And this was just a one-day primer to what other “city slickers” channeling Billy Crystal experienced in their five-day cattle drive at the College — but more on that later.

First, despite the city’s admonition of 300 days of sunshine, it was cold and rainy when we were there. And for my story, I had my cowboy shirt, hat and boots all on for the requisite photo op but ended up ensconced in multiple layers instead, including winter jacket, wool cap and gloves borrowed from the ranch. Wasn’t exactly the fashion statement I was going for.

The day began with some initial instruction from ranch manager and Jigger Boss Elaine Pawlowski, whose main goal seemed to be to keep us from falling off the horse and to avoid getting kicked when not on it. 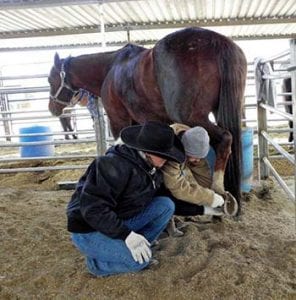 My experience up to then had been an occasional trail ride where the horse was presented to me all spruced up and saddled. All I was expected to do was mount it. Not so here. Prior to even thinking about actually riding the animal, I was taught how to groom and brush her — Billie, a brown mare — and how to do so safely. I had never been this close to a horse from all sides, responsible for the behind-the-scenes handling. Elaine showed me how to pick up Billie’s hooves and clean out the bottom of the horseshoe with a pick, removing the excess dirt, pebbles or nails before taking her out. My first thought was, “You want me to do what?” As I was cleaning out one of her hoofs, I couldn’t help thinking there are 1,200 pounds of horseflesh here that with one thrust of the hoof I’m holding can flatten me. Fortunately, Billie was not so inclined.

During Saddling 101, my status as the first-rate tenderfoot was further confirmed when I tried to pick up the saddle. I collapsed under its weight. The idea that I was actually supposed to get it atop the horse was ludicrous. I had absolutely no clue how much work went into just getting the animal ready to be ridden, much less the intricacies involved in actually riding one in the desert.

Riding a horse in the desert is a very different terrain than what most riders are used to and that in part is what brought Bob and Carol Skinner, local racehorse owners and my cohorts at the ranch, to the College.

Bob had been around a lot of very different racehorse disciplines all his life, but each discipline thinks its methods are the right ones in terms of training and expertise. Always looking to learn something new, Bob says he came to Cowboy College to see how the Cowboys do it as opposed to racers. Might be something he can incorporate into his own horse-related efforts. That much I understood. What came as a surprise was that as much as Bob knew about horses on the ground, he did not really ride. And while Carol did, her expertise was with racehorses; cowboy steeds were still a mystery.

To begin with, racers ride Eastern saddles which carry with them very proscribed rules of posture and deportment much more regimented than the more relaxed rules of Western riding. For starters, two-handed split reins vs. one-handed neck rein — after all, in the West, one hand must be free to shoot rattlesnakes and rope steers. Amazing how much of how you and your horse interact is determined by how you hold the reins. 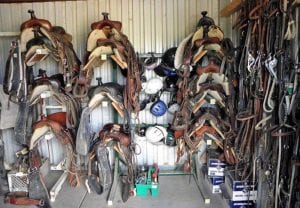 Prior to heading out on our ride, we hunkered down to the bunkhouse for chow. The fact that it was bologna, ham, and cheese on white bread with mayo seemed perfectly fitting. And the To Do list I spied on a bench near the stalls was slightly different than that found in most homes: Fix stalls 3,4, and 11; arrange tack rooms; cut off screws on saddle racks; clean out coops.

Riding on the range!

And then we headed out — me on Billie, a Quarterhorse, Carol on a Mustang, Bob on a Paint. Bob commented that just squeezing with his calves as opposed to his knees made an immediate difference. In the East, most trail rides are through woods; here we loped through sand and rocks and sagebrush, past cactus as tall as small buildings over a monochromatic panorama of gray and tan and muted greens. Did I say trail? Nope, no trail — just feeling our way over, around and through the rocky wasteland.

As we rested our horses atop a mesa in the Tonto National Forest, I looked out admiringly at the wide expanse of desert below, poetic mountains in the distance and a sky the color of every shade of blue found in even the largest box of Crayola crayons. This alone was worth the pain I expected to feel later in the day.

As we continued our ride, punctuated by an unending array of rocky inclines and descents, Bob and Carol became increasingly dismayed. Apparently, the uneven landscape and Western style of riding were alien to the two racehorse owners. The idea of riding horses over such a threatening terrain was a foreign concept, much less at a speed sufficient to maintain the momentum necessary to scale the crest of the embankment. Elaine kept reassuring them that, indeed, the horses were fine with it. She also kept reminding Carol, accustomed to riding English where proper posture is so important, to stay low in the saddle and resist the temptation to ride “two points.” 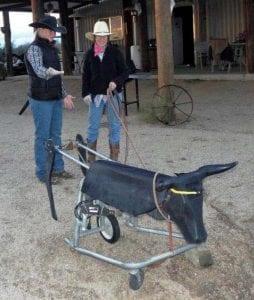 When I finally dismounted Billie, my legs were so wobbly I could barely make it to the corral. And we weren’t done yet — it was now time for our roping lesson. Fortunately, no actual calves were involved.

For those signed up for the complete Cowboy College program, this would have been just Day 1. Day 2 would be a more intense immersion into the cowboy’s world  — this time actually involving cows — before heading out to the cattle ranch about 25 miles to the north. Once there, the next four days are spent doing whatever needs to be done — rounding up the cows, moving cattle from one pasture to another, finding missing steer, branding and castrating, vaccinating, separating the mamas from the calves, fixing fences and checking water supplies, or helping other ranchers. That’s the life of the cowboy and the wannabes act accordingly.

“Participants range from novices to more experienced riders,” according to Elaine, “But no matter what the level of expertise, after riding 5-6 hours a day and being immersed in cowboy training, they’re pretty comfortable and ready for the trail experience.”

Okay, so I wasn’t ready to go on a multi-day cattle round-up, but I sure did have whole new respect for anyone who does. The plus for me? Considering the difficulty I had walking the next day, I was glad that — unlike those participating in the whole program — I did not have to get back up on a horse. For more information, visit cowboycollege.com.

Photos by Victor Block and the author.

Learn about the importance of secure WiFi via a VPN 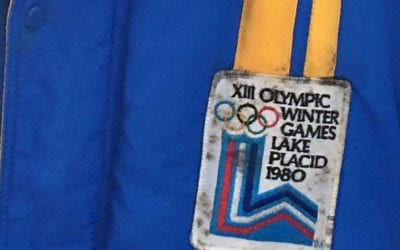 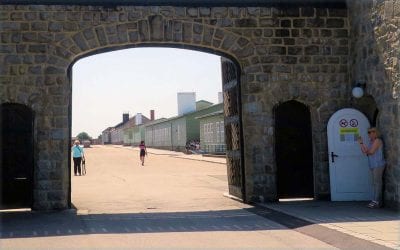 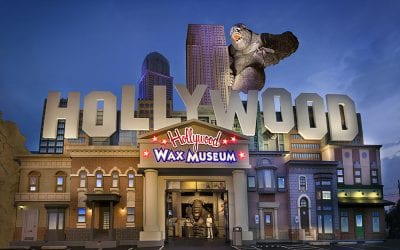