Enjoy American train stations as cultural centers in many cities

Why American train stations are worth exploring 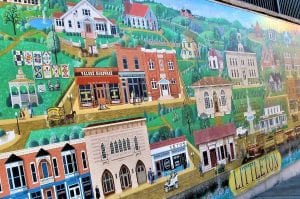 Visit American train stations. Betty Condon and Tom Butler are checking out a beautifully furnished room that was created for the use of U.S. presidents. Roger Price and Paul Beatty are enjoying a spirited game of tennis. Brothers Charles and Ted Brawner are sharing and comparing tastes at a state-of-the-art brewpub.

While none of these experiences might seem to be much out of the ordinary, where they’re taking place is. Enjoy these activities in American train stations in different parts of the United States.

Some magnificent train stations are far more than only railroad depots 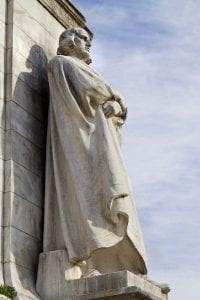 Statue of Christopher Columbus outside of Union Station in Washington, DC

Some railroad terminals are more, much more than just places where passengers board or depart from a train. They can double as art museums and examples of magnificent architecture, places to shop and sip, and in some cases locations of hidden surprises.

Even if you’re not planning a train trip, especially at this time of pandemic-limited travel, a station where you live, or not far away, could provide enough in the way of appeal and attractions to warrant a visit. People often are pleasantly surprised to learn that what they had viewed as an unexciting edifice they entered only when on the go offers a welcome choice of things to see and do.

For Betty Condon and Tom Butler, who live in Washington, D.C., that meant inspecting a room at the city’s Union Station, which replicates the world-famous Oval Office in the White House, several blocks away. After the assassination of President James A. Garfield at the railroad station in 1881, a Presidential Suite was installed to provide security. It has been used by several presidents to welcome world leaders and dignitaries. Currently, it’s available as a private event space. 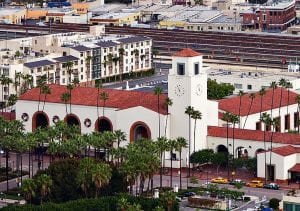 Roger Price and Paul Beatty were battling it out at the Vanderbilt Tennis Club. This club sits perched uniquely on the fourth floor of Grand Central Terminal in New York City.

The place where the Brawner brothers bonded is the Imperial Western Brewing Company (currently closed, check website) at the Los Angeles Union Station. It combines an authentic brewpub ambiance and a choice of house-brewed beverages with sausages and other traditional fares. 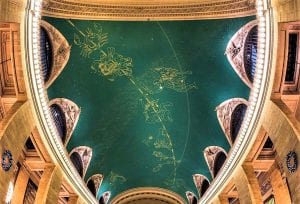 The architectural and visual diversion begins even before entering a building. Stations around the country feature a touch of architectural styles that range from Art Deco (Cincinnati) and Beaux-Arts (Chicago) to Spanish Revival (San Diego) and Streamline Moderne (Los Angeles).

Indoors, some American train stations double as art galleries. People rushing to catch a train or return home after a trip don’t often pause to admire paintings, sculptures, and other creations that surround them. Those with more time on their hands might wish to do so. The offerings cover the full range of artistic expression, with something for everyone’s diverse tastes.

Among decorations in Chicago’s Union Station are sculptures of a figure holding a rooster, which represents the day, and another clutching an owl for the night. They depict people on the go around the clock.

The ceiling of Grand Central Terminal serves as a canvas for a rendering of the zodiac. Painted in gold leaf and surrounded by more than 2,500 stars, the ceiling dominates the space. Those who are familiar with this astrological diagram notice that it is backward, but that was no accident. Cornelius Vanderbilt, the railroad and shipping tycoon who founded the terminal, explained that the figure was correct when viewed from heaven.

Union Depot in St. Paul, Minnesota, houses an impressive collection of murals, sculptures, and other creations. Topics of the six historic murals which grace the walls of the waiting room range from early settlement and immigration to mail delivery and railroad service workers. Ceramic sculptures portray four periods of the city’s history.

Even tiny American train stations can be venues for artistic expression. The first thing that greets passengers arriving at the light rail station in Littleton, Colorado, is a colorful 40-foot-wide wall mural that depicts more than 50 historic houses, churches, and other structures, some long gone and others still standing. Presented in folk-art style, the painting recreates the town as it was during the 19th and early 20th centuries.

An exterior wall of the 1,200-square-foot depot in Carlinville, Illinois, (population about 5,500) features a mural that was painted by a local resident. It shows Abraham Lincoln, who visited the town before entering politics and later campaigned there, tipping his hat from the back of a train to a group of modern-day onlookers. 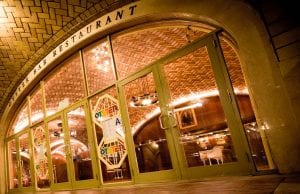 Some American train stations even serve as destination restaurants for both travelers and city inhabitants. The cleverly named Traxx Restaurant in Los Angeles Union Station has been in business for 25 years. Grand Central Terminal in New York houses about three dozen places to eat. By far the best known is the famous 107-year-old Oyster Bar & Restaurant. This restaurant (currently closed check website) serves as a landmark. It has one of the most extensive seafood menus in the city.

From art to architecture, seafood to sculptures, some American train stations around the country offer more than just a place to catch a train. If one isn’t located where you live, you might find a superstation not too far away.

For information about the art, architecture, history, and other facts and facets related to American train stations around the country, log onto greatamericanstations.com.