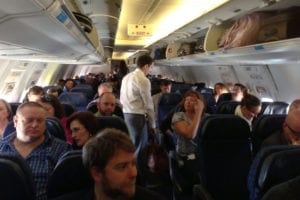 Airlines and hundreds of passengers suffer serious delays because of sickness aboard planes landing in the US. These kinds of incidents, during the coronavirus, are rampant. This sickness is shining a light on the airline practice of not allowing passengers to change their flights without penalties even when they come with letters from doctors.

The airline sick passenger rules affected me personally two years ago. I was diagnosed with pneumonia just before getting ready to fly back to the US. I asked Delta Air Lines whether I could fly three days later because I was suffering from pneumonia. Their answer was, “of course, but it will cost you.” I had a doctor’s note, hospital records, and x-rays to show my condition, I was told that if I did not use my ticket, I would be charged a $300 change fee and would have to pay the full fare for my return flight rather than my discounted ticket.

The flight change was far more expensive than I was willing to pay. However, I was willing to pay for my costs in Madrid for a small hotel and meals. But, Delta was not budging on its demand to extract extra money from me to stay in Madrid for another three days. The Delta airline sick passenger rules forced me to fly. Interestingly, the Delta crew could have refused to allow me on the plane, though a doctor’s note and three-day-old x-rays and the hospital report had no influence.

Airline passengers suffer sickness because of these airline sick-passenger rules

The effects of forcing sick passengers to pay extra to postpone a trip can cost airlines dearly. Emirates Airlines and American Airlines reported dozens of passengers sick and many were tested and detained. When sick passengers are packed into a loaded aircraft, the chances of a disease spreading is high. It only gets more dramatic when one considers that the air, complete with germs, is then recirculated through the plane.

The current Wuhan coronavirus is a perfect case in point. All flights were canceled. Airlines are losing money. Passengers lose vacations and have few alternatives unless they purchased insurance. This is not a new situation.

A flight from the Middle East flown by Emirates Airlines landed in JFK and was quarantined because more than 100 passengers claimed to be sick.

Officials with the Centers for Disease Control (CDC) and state, local and airport authorities met the stricken Emirates plane when it landed Wednesday morning at John F. Kennedy International Airport after a long flight. Initial reports said 100 passengers were sick. All passengers and crew members were evaluated, with seven crew members and three passengers hospitalized. (The CDC puts the number hospitalized at 11, one higher than the airline and other authorities.)

There were passenger sickness outbreaks the next day on American Airlines flights from Munich and Paris.

Passengers and crew on two flights arriving in Philadelphia from Europe on Thursday were screened by medical teams after 12 people aboard became ill with flu-like symptoms, a day after a similar outbreak on a flight from Dubai to New York.

Flight 717 from Munich and Flight 755 from Charles de Gaulle Airport in Paris both arrived in Philadelphia on Thursday afternoon, she said.

“Twelve passengers from the two flights reported sore throat and cough, and none were identified with fever. None of the passengers are severely ill, and they will be released and informed of test results in 24 hours,” Haynes said.

…Separately, health officials in Houston said they were looking into a case of a person with measles possibly exposing others to the virus during a flight connection at that city’s Hobby Airport on Aug. 21 and 22.

The CDC recommends “people sick with flu stay home and avoid travel for at least 24 hours after their fever is gone.” However, airlines will charge passengers to do that. Passengers must pay a whopping cancellation fee. The change fees are $200 for domestic flights and $300 and more for international flights. Plus, airlines will then charge passengers the last-minute airfares. Those can add hundreds of dollars to sick passenger expenses.

ALSO ON TRAVELERS UNITED: Important ways DOT should help passengers like you

Airlines can make medical decisions about which passengers to allow onboard flights. However, doctors are not allowed to stop passengers from flying. This is truly an upside-down world.

Airlines have the right to refuse to carry passengers with conditions that may worsen. If the crew believes a passenger may have serious consequences during the flight, the passenger can be stopped. They may require medical clearance from their medical department/adviser if there is an indication that a passenger could be suffering from any disease or physical or mental condition that:

If cabin crew suspects before departure that a passenger may be ill, the aircraft’s captain will be informed and a decision made as to whether the passenger is fit to travel, needs medical attention or presents a danger to other passengers and crew or to the safety of the aircraft.

It is time that airlines allow passengers with legitimate illnesses to postpone flights. It is far better for passengers, the crew, and the airline to permit sick passengers to change flights. This will stop them from infecting other passengers. 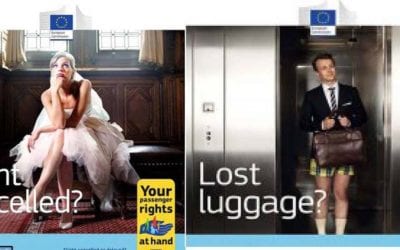