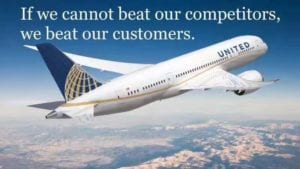 United Airlines violated three basic bumping rules. The more that Travelers United looks into the incident on United Airlines #3411, the more violations of Department of Transportation (DOT) rules as well as the airline’s own contract of carriage appear. The solution is to make sure passengers and airline personnel know the rules and follow them.
For years Travelers United has been asking that passenger rights be displayed on posters at airports and be included on all computer-generated boarding passes and ticket itineraries. In Europe, these posters have been plastered on airport walls, hang beside jetways, are displayed in baggage carousel areas, and are part of the European passenger rights efforts.
In the US there are only three instances when passengers can demand compensation from airlines for customer service failures.

In the US, passengers are left to depend on airlines to explain the rules to them in times of airport passenger service crises.
The United Airlines fiasco is a perfect case in point. If passengers knew the three basic bumping rules, and if UA followed them, this beating of a law-abiding, rule-following, innocent passenger would never have happened. The airline violated its own contract with the passengers, as well as federal rules.
DOT denied boarding rules state specifics about compensation of passengers in these cases. There are three basic bumping rules. Of course, there is more fine print, however, these are the basics.

Compensation of passengers — According to passengers on UA Flight 3411, compensation offered was, initially, $400 in airline scrip and a seat on the next flight. There were no takers. Next, passengers were offered $800 in airline scrip and a night in a hotel (this is when many realized that the “next flight” meant the next day). There was no offer of cash as required in DOT rules. There was no offer of the DOT-required payment of $1,350 as the rule states for bumping that results in a delay of more than two hours.
Here are the rules as stated on the DOT website.

-If you are bumped involuntarily and the airline arranges substitute transportation that is scheduled to get you to your final destination (including later connections) within one hour of your original scheduled arrival time, there is no compensation.
-If the airline arranges substitute transportation that is scheduled to arrive at your destination between one and two hours after your original arrival time (between one and four hours on international flights), the airline must pay you an amount equal to 200% of your one-way fare to your final destination that day, with a $675 maximum.
-If the substitute transportation is scheduled to get you to your destination more than two hours later (four hours internationally), or if the airline does not make any substitute travel arrangements for you, the compensation doubles (400% of your one-way fare, $1350 maximum).
-If your ticket does not show a fare (for example, a frequent-flyer award ticket or a ticket issued by a consolidator), your denied boarding compensation is based on the lowest cash, check or credit card payment charged for a ticket in the same class of service (e.g., coach, first class) on that flight.

Boarding priority — DOT’s website states, “Airlines set their own ‘boarding priorities’ — the order in which they will bump different categories of passengers in an oversale situation.” Here is the exact wording.

If there are not enough volunteers, other passengers may be denied boarding involuntarily in accordance with the following boarding priority of (name of air carrier): (In this space the carrier inserts its boarding priority rules or a summary thereof, in a manner to be understandable to the average passenger.)

(a) Every carrier shall furnish passengers who are denied boarding involuntarily from flights on which they hold confirmed reserved space immediately after the denied boarding occurs, a written statement explaining the terms, conditions, and limitations of denied boarding compensation, and describing the carriers’ boarding priority rules and criteria.

I’m not certain whether or not the United Airlines gate agents handed out these required statements of rights to passengers. The video shows no explanation of benefits, no mention of boarding priority, and no written notification of denied boarding rights.
It appears that rather than following DOT’s federal rules and their own contract of carriage, United Airlines violated the rules and ignored their contract with their passengers.
This time, United Airlines’ corporate culture of squeezing their customers out of every penny possible came back to bite them. This was a dramatic systemwide failure at Untied Airlines.
The CEO failed — The initial callous remarks of the CEO clearly told passengers that customer service was the airline’s lowest priority after profits and defending his personnel.
United’s corporate culture failed — “Customers last” has rarely been so clearly evident.
The crew scheduling systems failed — This resulted in the basis for this fiasco. The only “overbooking” was caused by United’s need to move crew at the last second.
The gate agents failed — They did not follow federal rules and their own contract of carriage.
The captain failed — He should have never allowed police to come aboard his plane to forcibly remove a passenger until the rules had been followed and every effort to get volunteers was exhausted. Obeying crewmembers’ instructions all fall under the responsibility of the aircraft captain. He/She has the final word aboard their aircraft whether parked at the gate or in the air. They are in command.