No question about it: 2020 has been a year of complaints like no other 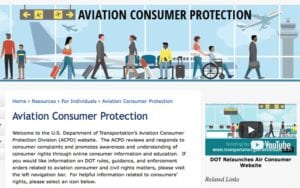 Air travelers deluged the U.S. Department of Transportation (DOT) with grievances, mostly related to refunds during the pandemic. From January to August, the DOT received 95,213 complaints, the highest number in its history. (The previous annual record, 44,845 complaints, was set in 1987.) This was the top year of complaints in history.

To keep up with demand, the DOT’s Office of Aviation Consumer Protection had to authorize more overtime for its workers. It temporarily reassigned employees and hired temporary staff, according to the department. An unknown number of grievances related to car rental companies, hotels, and tour operators also kept consumer advocates busy this year.

John Niser, director of Fairleigh Dickinson University’s school of hospitality and tourism, says the wave of cancellations this spring after the COVID-19 outbreak triggered the historic surge of complaints.

Travel complaints shot up in Spring of 2020

“Travel cancellations skyrocketed in March and April,” he says. “Companies were completely unprepared for the volume of complaints.”

The refund requests piled up quickly, creating delays and complaints about the delays. Many travel companies tried to pressure customers to accept vouchers with an expiration date, spawning still more grievances.

Consumer advocates say travel companies were not the only ones unprepared for the explosion of complaints. The federal government, which enforces consumer laws protecting airline passengers, wasn’t prepared either.

The DOT complaint system was overwhelmed

“For months now, we’ve been assisting consumers in fighting for refunds,” says William McGee, an aviation adviser to Consumer Reports. “We’ve heard countless horror stories, even in cases where the DOT’s letter-of-the-law regulations clearly state the airlines must provide cash refunds. And many of those who eventually were successful were forced to jump through hoops over the course of many months.”

McGee says the organization asked Transportation Secretary Elaine Chao for help but that the DOT “failed to ensure airlines are doing all they should in a timely manner.”

The DOT says that is wrong. Blane Workie, the assistant general counsel for the DOT’s Office of Aviation Enforcement and Proceedings, says it has devoted time, energy, and effort to ensuring airline passengers get timely refunds.

“The Department’s Office of Aviation Consumer Protection has processed nearly 100,000 consumer complaints so far in the calendar year 2020, most of which concern refunds,” she says. “Thousands of passengers who had initially been denied refunds have received or are receiving the required refunds.”

A complaint system takes time. DOT opted for speed over punishment. They wanted consumers to get refunds, not two-year legal struggles

It’s a process. Consider what happened to Andrew Cunningham, who had tickets to fly from Chicago to Orlando for a Disney vacation with his family this spring. The airline canceled his flights and offered only a voucher — a common problem after the COVID-19 outbreak.

“We were not going to settle for this, so we hopped online to the DOT complaint portal, uploaded our original tickets along with the confirmation of the cancellation, and our vouchers,” says Cunningham, a pest control expert from Chicago.

Three weeks later, he received a letter from the airline promising a refund within 21 days. Under DOT rules, the airline has seven business days to provide a refund. By the time he received his money, two months had elapsed.

He is one of the lucky ones. Many people are still waiting for refunds from international airlines.

Other than the fact that travel companies don’t like giving refunds, did travelers learn anything? Absolutely. Among the takeaways:

Travel companies will go to great lengths to avoid refunds

This year, travelers discovered how far. Some companies retroactively changed contracts, and others falsely claimed that the government allowed them to issue vouchers. Only careful research — digging into contracts and the applicable laws — helped consumers prevail.

The Fair Credit Billing Act is your friend. Thanks to this law, hundreds of thousands of travelers successfully disputed ticket and room charges when travel companies refused to help. The law allows consumers to file for chargebacks on credit card charges for goods and services that buyers didn’t accept or that weren’t delivered as agreed.

Government warnings can help. Even if the government can’t help you resolve a complaint, official government warnings might be a useful tool. That is what Peter Lavelle discovered when he tried to cancel a nonrefundable Athens hotel reservation he had made through Booking.com this summer. Lavelle, who works for a visa-processing service in Madrid, says everything changed when Spain’s government announced a state of alert prohibiting foreign travel. “Under Booking.com’s policies,” he says, “it qualifies as a force majeure event, and the hotel issued the refund.”

Refund solution is more than simply taking airlines to court — passengers need their money back, now

The events of 2020 also taught travelers a few things about problem resolution. It comes down to what I call the three P’s of problem-solving: patience, persistence, and politeness.

Under ideal circumstances, it can take weeks for a company to respond to a legitimate complaint. During the pandemic, travelers routinely waited months for an acknowledgment. To say that their patience was tested would be an understatement. And yet travelers learned to be patient in 2020. They had no choice.

Travelers also learned the value of persistence. They kept records and emails like never before. They set reminders to check on the status of refunds and vouchers. Somehow, they knew that failing to follow up would mean that the airline or hotel would just keep their money.

Remarkably, most of the complaints I saw were concise and civil. Consumers seemed to understand the extraordinary circumstances of the pandemic and that we were all in this together.

If you’re still waiting for a refund or have any other customer service problem from a 2020 trip, don’t give up. Many travel companies are still sorting through the complaints and trying to address every customer. Whether you’re waiting for money back on an airline ticket, a cruise or a tour, your patience, persistence, and politeness will pay off.

If the pace holds, the number of official complaints about airlines this year may approach 200,000. And, of course, the total number of travel complaints is far higher. It’s been a year for the record books. May there never be another one like it.